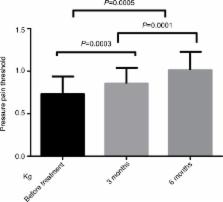 The clinical characteristics of migraine with and without allodynia were compared to evaluate the risk factors of cutaneous allodynia in migraine. The effects of prophylactic therapy on allodynia in patients with migraine were assessed based on the change in pain threshold after therapy.

A total of 71 patients with migraine admitted to the Department of Neurology of Shandong Provincial Hospital were recruited in this study. The included patients were aged 18–70 years and did not present positive symptoms according to the nervous system examination. The variation in cutaneous allodynia was assessed for the role of classic prophylactic therapy in migraine-related allodynia, also termed as central sensitization (CS). Patients with migraine were randomized into two groups (topiramate and flunarizine groups), and the effect of drugs was evaluated by the change in cutaneous pain threshold between the two groups. Fifty-five patients were tested for pain threshold due to instrument failure. Pressure allodynia was measured with a force gage, and pricking was measured with Electronic von Frey Anesthesiometer. The pain threshold was measured every 3 months for 6 months. The variations in pain threshold after treatment were compared using t-test and χ 2 test.

Allodynia was seen in 70.4% of the patients; of these, 76.3% were females. Female gender, duration of illness, and frequency of migraine attacks per month were significantly associated with allodynia. The rate of allodynia and frequency of headache declined significantly, the number of patients with allodynia was reduced, and the pain threshold improved dramatically after treatment. The composite adverse events were low after treatment with topiramate and flunarizine.

Allodynia was observed, especially in females who experienced frequent migraine attacks for a prolonged period. Gender, duration of illness, and number of migraine attacks per month were the major predictors of allodynia. Topiramate and flunarizine administered orally for a short duration can effectively improve the pain threshold and CS of patients with migraine, and efficiently relieve allodynia.

Prevalence and burden of migraine in the United States: data from the American Migraine Study II.

R Lipton,  W F Stewart,  Herbert Diamond … (2015)
To describe the prevalence, sociodemographic profile, and the burden of migraine in the United States in 1999 and to compare results with the original American Migraine Study, a 1989 population-based study employing identical methods. A validated, self-administered questionnaire was mailed to a sample of 20 000 households in the United States. Each household member with severe headache was asked to respond to questions about symptoms, frequency, and severity of headaches and about headache-related disability. Diagnostic criteria for migraine were based on those of the International Headache Society. This report is restricted to individuals 12 years and older. Of the 43 527 age-eligible individuals, 29 727 responded to the questionnaire for a 68.3% response rate. The prevalence of migraine was 18.2% among females and 6.5% among males. Approximately 23% of households contained at least one member suffering from migraine. Migraine prevalence was higher in whites than in blacks and was inversely related to household income. Prevalence increased from aged 12 years to about aged 40 years and declined thereafter in both sexes. Fifty-three percent of respondents reported that their severe headaches caused substantial impairment in activities or required bed rest. Approximately 31% missed at least 1 day of work or school in the previous 3 months because of migraine; 51% reported that work or school productivity was reduced by at least 50%. Two methodologically identical national surveys in the United States conducted 10 years apart show that the prevalence and distribution of migraine have remained stable over the last decade. Migraine-associated disability remains substantial and pervasive. The number of migraineurs has increased from 23.6 million in 1989 to 27.9 million in 1999 commensurate with the growth of the population. Migraine is an important target for public health interventions because it is highly prevalent and disabling.

An association between migraine and cutaneous allodynia.

D Yarnitsky,  I Goor-Aryeh,  Zahid H Bajwa … (2000)
Recent animal studies on the mechanism of migraine show that intracranial pain is accompanied by increased periorbital skin sensitivity. These findings suggest that the pathophysiology of migraine involves not only irritation of meningeal perivascular pain fibers but also a transient increase in the responsiveness (ie, sensitization) of central pain neurons that process information arising from intracranial structures and skin. The purpose of this study was to determine whether the increased skin sensitivity observed in animal also develops in humans during migraine attacks. Repeated measurements of mechanical and thermal pain thresholds of periorbital and forearm skin areas in the absence of, and during, migraine attacks enabled us to determine the occurrence of cutaneous allodynia during migraine. Cutaneous allodynia is pain resulting from a nonnoxious stimulus to normal skin. In 79% of the patients, migraine was associated with cutaneous allodynia as defined, and in 21% of the patients it was not. The cutaneous allodynia occurred either solely within the referred pain area on the ipsilateral head, or within and outside the ipsilateral head. Cutaneous allodynia in certain well-defined regions of the skin during migraine is an as yet unreported neurological finding that points to hyperexcitability of a specific central pain pathway that subserves intracranial sensation.