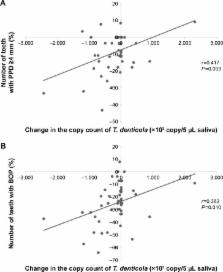 Our results are the first to show that exercise might contribute to improvements in periodontal disease.

Immune function in sport and exercise.

Michael Gleeson (2007)
Regular moderate exercise is associated with a reduced incidence of infection compared with a completely sedentary state. However, prolonged bouts of strenuous exercise cause a temporary depression of various aspects of immune function (e.g., neutrophil respiratory burst, lymphocyte proliferation, monocyte antigen presentation) that usually lasts approximately 3-24 h after exercise, depending on the intensity and duration of the exercise bout. Postexercise immune function dysfunction is most pronounced when the exercise is continuous, prolonged (>1.5 h), of moderate to high intensity (55-75% maximum O(2) uptake), and performed without food intake. Periods of intensified training (overreaching) lasting 1 wk or more may result in longer lasting immune dysfunction. Although elite athletes are not clinically immune deficient, it is possible that the combined effects of small changes in several immune parameters may compromise resistance to common minor illnesses, such as upper respiratory tract infection. However, this may be a small price to pay as the anti-inflammatory effects of exercise mediated through cytokines and/or downregulation of toll-like receptor expression are likely mediators of many of the long-term health benefits of regular exercise.

Obesity increases sensitivity to endotoxin liver injury: implications for the pathogenesis of steatohepatitis.

Sean Diehl,  Sarah M. Lane,  Daniel Clemens … (1997)
Genetically obese fatty/fatty rats and obese/obese mice exhibit increased sensitivity to endotoxin hepatotoxicity, quickly developing steatohepatitis after exposure to low doses of lipopolysaccharide (LPS). Among obese animals, females are more sensitive to endotoxin liver injury than males. LPS induction of tumor necrosis factor alpha (TNF alpha), the proven affecter of endotoxin liver injury, is no greater in the livers, white adipose tissues, or sera of obese animals than in those of lean controls. Indeed, the lowest serum concentrations of TNF occur in female obese rodents, which exhibit the most endotoxin-induced liver injury. Several cytokines that modulate the biological activity of TNF are regulated abnormally in the livers of obese animals. After exposure to LPS, mRNA of interferon gamma, which sensitizes hepatocytes to TNF toxicity, is overexpressed, and mRNA levels of interleukin 10, a TNF inhibitor, are decreased. The phagocytic activity of liver macrophages and the hepatic expression of a gene encoding a macrophage-specific receptor are also decreased in obesity. This new animal model of obesity-associated liver disease demonstrates that hepatic macrophage dysfunction occurs in obesity and suggests that this might promote steatohepatitis by sensitizing hepatocytes to endotoxin.