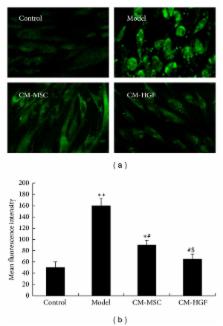 Parkinson's disease (PD) is a neurodegenerative movement disorder that is characterized by the progressive degeneration of the dopaminergic (DA) pathway. Mesenchymal stem cells derived from human umbilical cord (hUC-MSCs) have great potential for developing a therapeutic agent as such. HGF is a multifunctional mediator originally identified in hepatocytes and has recently been reported to possess various neuroprotective properties. This study was designed to investigate the protective effect of hUC-MSCs infected by an adenovirus carrying the HGF gene on the PD cell model induced by MPP+ on human bone marrow neuroblastoma cells. Our results provide evidence that the cultural supernatant from hUC-MSCs expressing HGF could promote regeneration of damaged PD cells at higher efficacy than the supernatant from hUC-MSCs alone. And intracellular free Ca 2+ obviously decreased after treatment with cultural supernatant from hUC-MSCs expressing HGF, while the expression of CaBP-D28k, an intracellular calcium binding protein, increased. Therefore our study clearly demonstrated that cultural supernatant of MSC overexpressing HGF was capable of eliciting regeneration of damaged PD model cells. This effect was probably achieved through the regulation of intracellular Ca 2+ levels by modulating of CaBP-D28k expression.

Identification of the hepatocyte growth factor receptor as the c-met proto-oncogene product.

J. Peter Rubin,  N. Kmiecik,  G F Vande Woude … (1991)
Hepatocyte growth factor (HGF) is a plasminogen-like protein thought to be a humoral mediator of liver regeneration. A 145-kilodalton tyrosyl phosphoprotein observed in rapid response to HGF treatment of intact target cells was identified by immunoblot analysis as the beta subunit of the c-met proto-oncogene product, a membrane-spanning tyrosine kinase. Covalent cross-linking of 125I-labeled ligand to cellular proteins of appropriate size that were recognized by antibodies to c-met directly established the c-met product as the cell-surface receptor for HGF.

O W Cass,  Zhihong Zhang,  Stuart D. Russell … (1996)
Parkinson's disease results from the progressive degeneration of dopamine neurons that innervate the striatum. In rodents, glial-cell-line-derived neurotrophic factor (GDNF) stimulates an increase in midbrain dopamine levels, protects dopamine neurons from some neurotoxins, and maintains injured dopamine neurons. Here we extend the rodent studies to an animal closer to the human in brain organization and function, by evaluating the effects of GDNF injected intracerebrally in rhesus monkeys that have had the symptomatology and pathophysiological features of Parkinson's disease induced by the neurotoxin 1-methyl-4-phenyl-1,2,3,6-tetrahydropyridine (MPTP). The recipients of GDNF displayed significant improvements in three of the cardinal symptoms of parkinsonism: bradykinesia, rigidity and postural instability. GDNF administered every four weeks maintained functional recovery. On the lesioned side of GDNF-treated animals, dopamine levels in the midbrain and globus pallidus were twice as high, and nigral dopamine neurons were, on average, 20% larger, with an increased fibre density. The results indicate that GDNF may be of benefit in the treatment of Parkinson's disease.

Neelam K Venkataramana,  Satish K.V. Kumar,  Sudheer Balaraju … (2010)
Parkinson's disease (PD) is a progressive neurodegenerative disease for which stem cell research has created hope in the last few years. Seven PD patients aged 22 to 62 years with a mean duration of disease 14.7+/-7.56 years were enrolled to participate in the prospective, uncontrolled, pilot study of single-dose, unilateral transplantation of autologous bone-marrow-derived mesenchymal stem cells (BM-MSCs). The BM-MSCs were transplanted into the sublateral ventricular zone by stereotaxic surgery. Patients were followed up for a period that ranged from 10 to 36 months. The mean baseline "off" score was 65+/-22.06, and the mean baseline "on" score was 50.6+/-15.85. Three of 7 patients have shown a steady improvement in their "off"/"on" Unified Parkinson's Disease Rating Scale (UPDRS). The mean "off" score at their last follow-up was 43.3 with an improvement of 22.9% from the baseline. The mean "on" score at their last follow-up was 31.7, with an improvement of 38%. Hoehn and Yahr (H&Y) and Schwab and England (S&E) scores showed similar improvements from 2.7 and 2.5 in H&Y and 14% improvement in S&E scores, respectively. A subjective improvement was found in symptoms like facial expression, gait, and freezing episodes; 2 patients have significantly reduced the dosages of PD medicine. These results indicate that our protocol seems to be safe, and no serious adverse events occurred after stem-cell transplantation in PD patients. The number of patients recruited and the uncontrolled nature of the trial did not permit demonstration of effectiveness of the treatment involved. However, the results encourage future trials with more patients to demonstrate efficacy. (c) 2010 Mosby, Inc. All rights reserved.