Reconstruction of large-scale regulatory networks based on perturbation graphs and transitive reduction: improved methods and their evaluation 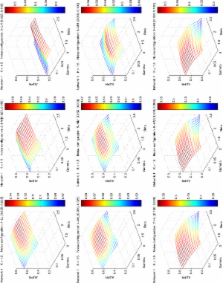 The data-driven inference of intracellular networks is one of the key challenges of computational and systems biology. As suggested by recent works, a simple yet effective approach for reconstructing regulatory networks comprises the following two steps. First, the observed effects induced by directed perturbations are collected in a signed and directed perturbation graph (PG). In a second step, Transitive Reduction (TR) is used to identify and eliminate those edges in the PG that can be explained by paths and are therefore likely to reflect indirect effects.

In this work we introduce novel variants for PG generation and TR, leading to significantly improved performances. The key modifications concern: (i) use of novel statistical criteria for deriving a high-quality PG from experimental data; (ii) the application of local TR which allows only short paths to explain (and remove) a given edge; and (iii) a novel strategy to rank the edges with respect to their confidence. To compare the new methods with existing ones we not only apply them to a recent DREAM network inference challenge but also to a novel and unprecedented synthetic compendium consisting of 30 5000-gene networks simulated with varying biological and measurement error variances resulting in a total of 270 datasets. The benchmarks clearly demonstrate the superior reconstruction performance of the novel PG and TR variants compared to existing approaches. Moreover, the benchmark enabled us to draw some general conclusions. For example, it turns out that local TR restricted to paths with a length of only two is often sufficient or even favorable. We also demonstrate that considering edge weights is highly beneficial for TR whereas consideration of edge signs is of minor importance. We explain these observations from a graph-theoretical perspective and discuss the consequences with respect to a greatly reduced computational demand to conduct TR. Finally, as a realistic application scenario, we use our framework for inferring gene interactions in yeast based on a library of gene expression data measured in mutants with single knockouts of transcription factors. The reconstructed network shows a significant enrichment of known interactions, especially within the 100 most confident (and for experimental validation most relevant) edges.

This paper presents several major achievements. The novel methods introduced herein can be seen as state of the art for inference techniques relying on perturbation graphs and transitive reduction. Another key result of the study is the generation of a new and unprecedented large-scale in silico benchmark dataset accounting for different noise levels and providing a solid basis for unbiased testing of network inference methodologies. Finally, applying our approach to Saccharomyces cerevisiae suggested several new gene interactions with high confidence awaiting experimental validation.

The DNA-encoded nucleosome organization of a eukaryotic genome.

Christopher N. Luscombe,  Haiyuan Yu,  M. Babu … (2004)
Network analysis has been applied widely, providing a unifying language to describe disparate systems ranging from social interactions to power grids. It has recently been used in molecular biology, but so far the resulting networks have only been analysed statically. Here we present the dynamics of a biological network on a genomic scale, by integrating transcriptional regulatory information and gene-expression data for multiple conditions in Saccharomyces cerevisiae. We develop an approach for the statistical analysis of network dynamics, called SANDY, combining well-known global topological measures, local motifs and newly derived statistics. We uncover large changes in underlying network architecture that are unexpected given current viewpoints and random simulations. In response to diverse stimuli, transcription factors alter their interactions to varying degrees, thereby rewiring the network. A few transcription factors serve as permanent hubs, but most act transiently only during certain conditions. By studying sub-network structures, we show that environmental responses facilitate fast signal propagation (for example, with short regulatory cascades), whereas the cell cycle and sporulation direct temporal progression through multiple stages (for example, with highly inter-connected transcription factors). Indeed, to drive the latter processes forward, phase-specific transcription factors inter-regulate serially, and ubiquitously active transcription factors layer above them in a two-tiered hierarchy. We anticipate that many of the concepts presented here--particularly the large-scale topological changes and hub transience--will apply to other biological networks, including complex sub-systems in higher eukaryotes.