Genetic Variants in PCSK1 Gene Are Associated with the Risk of Coronary Artery Disease in Type 2 Diabetes in a Chinese Han Population: A Case Control Study 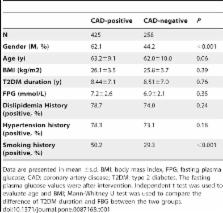 Insulin and glucagon-like peptide 1 (GLP-1), converted by proprotein convertase 1 (PC1/3) from proinsulin and proglucagon, are associated with type 2 diabetes (T2DM) and coronary artery disease (CAD). The aim of this study is to investigate the association of PCSK1 gene, which encodes PC1/3, with the risk of CAD in Chinese patients with T2DM.

Our results found that common genetic variants in PCSK1 were associated with CAD in Chinese patients with T2DM.

R S Jackson, J Creemers, S Ohagi … (1997)
Human obesity has an inherited component, but in contrast to rodent obesity, precise genetic defects have yet to be defined. A mutation of carboxypeptidase E (CPE), an enzyme active in the processing and sorting of prohormones, causes obesity in the fat/fat mouse. We have previously described a women with extreme childhood obesity (Fig. 1), abnormal glucose homeostasis, hypogonadotrophic hypogonadism, hypocortisolism and elevated plasma proinsulin and pro-opiomelanocortin (POMC) concentrations but a very low insulin level, suggestive of a defective prohormone processing by the endopeptidase, prohormone convertase 1 (PC1; ref. 4). We now report this proband to be a compound heterozygote for mutations in PC1. Gly-->Arg483 prevents processing of proPC1 and leads to its retention in the endoplasmic reticulum (ER). A-->C+4 of the intro-5 donor splice site causes skipping of exon 5 leading to loss of 26 residues, a frameshift and creation of a premature stop codon within the catalytic domain. PC1 acts proximally to CPE in the pathway of post-translational processing of prohormones and neuropeptides. In view of the similarity between the proband and the fat/fat mouse phenotype, we infer that molecular defects in prohormone conversion may represent a generic mechanism for obesity, common to humans and rodents.

Hyperphagia and early-onset obesity due to a novel homozygous missense mutation in prohormone convertase 1/3.

Julia Keogh, Stephen O'Rahilly, John Creemers … (2007)
Congenital deficiency of the neuroendocrine-specific enzyme prohormone convertase (PC) 1/3 leads to a syndrome characterized by obesity, small intestinal dysfunction, and dysregulation of glucose homeostasis in humans. To date, only two unrelated subjects with this disorder have been reported. We now report a third proband, a 6-yr-old boy, offspring of a consanguineous union of parents of North African origin, who was homozygous for a novel missense mutation Ser307Leu. We characterized the functional properties of the mutant PC1/3 and characterized the clinical phenotype of the patient. In vitro this mutation markedly impairs the catalytic activity of the convertase. However, in contrast to other previously described naturally occurring mutations, intracellular trafficking of this mutant enzyme appeared normal. The Ser307Leu mutant retained some autocatalytic activity, even though it was completely inactive on other substrates. As with the previous two patients, this child had obesity and persistent diarrhea, however, there was no history of reactive hypoglycemia. The patient showed markedly increased food intake at an ad libitum test meal, confirming that hyperphagia makes a major contribution to the obesity seen in this syndrome. This case extends the clinical and molecular spectrum of human congenital PC1/3 deficiency.

The study was granted by National 973 project (2006CB503903, 2006CB503908) in China. The funders had no role in study design, data collection and analysis, decision to publish, or preparation of the manuscript.