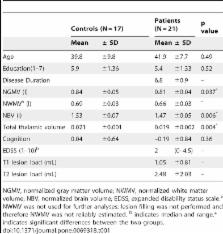 O Etard,  B Landeau,  D Papathanassiou … (2002)
An anatomical parcellation of the spatially normalized single-subject high-resolution T1 volume provided by the Montreal Neurological Institute (MNI) (D. L. Collins et al., 1998, Trans. Med. Imag. 17, 463-468) was performed. The MNI single-subject main sulci were first delineated and further used as landmarks for the 3D definition of 45 anatomical volumes of interest (AVOI) in each hemisphere. This procedure was performed using a dedicated software which allowed a 3D following of the sulci course on the edited brain. Regions of interest were then drawn manually with the same software every 2 mm on the axial slices of the high-resolution MNI single subject. The 90 AVOI were reconstructed and assigned a label. Using this parcellation method, three procedures to perform the automated anatomical labeling of functional studies are proposed: (1) labeling of an extremum defined by a set of coordinates, (2) percentage of voxels belonging to each of the AVOI intersected by a sphere centered by a set of coordinates, and (3) percentage of voxels belonging to each of the AVOI intersected by an activated cluster. An interface with the Statistical Parametric Mapping package (SPM, J. Ashburner and K. J. Friston, 1999, Hum. Brain Mapp. 7, 254-266) is provided as a freeware to researchers of the neuroimaging community. We believe that this tool is an improvement for the macroscopical labeling of activated area compared to labeling assessed using the Talairach atlas brain in which deformations are well known. However, this tool does not alleviate the need for more sophisticated labeling strategies based on anatomical or cytoarchitectonic probabilistic maps.

Frederik Barkhof,  Ryan Smith,  Jord C. Stam … (2006)
Functional MRI (fMRI) can be applied to study the functional connectivity of the human brain. It has been suggested that fluctuations in the blood oxygenation level-dependent (BOLD) signal during rest reflect the neuronal baseline activity of the brain, representing the state of the human brain in the absence of goal-directed neuronal action and external input, and that these slow fluctuations correspond to functionally relevant resting-state networks. Several studies on resting fMRI have been conducted, reporting an apparent similarity between the identified patterns. The spatial consistency of these resting patterns, however, has not yet been evaluated and quantified. In this study, we apply a data analysis approach called tensor probabilistic independent component analysis to resting-state fMRI data to find coherencies that are consistent across subjects and sessions. We characterize and quantify the consistency of these effects by using a bootstrapping approach, and we estimate the BOLD amplitude modulation as well as the voxel-wise cross-subject variation. The analysis found 10 patterns with potential functional relevance, consisting of regions known to be involved in motor function, visual processing, executive functioning, auditory processing, memory, and the so-called default-mode network, each with BOLD signal changes up to 3%. In general, areas with a high mean percentage BOLD signal are consistent and show the least variation around the mean. These findings show that the baseline activity of the brain is consistent across subjects exhibiting significant temporal dynamics, with percentage BOLD signal change comparable with the signal changes found in task-related experiments.