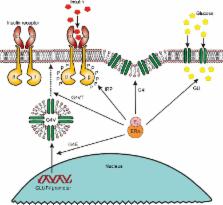 Currently available scientific evidence erroneously suggests that mutagenic weakness or loss of the BRCA1/2 genes may liberate the proliferative effects of estrogen signaling, which provokes DNA damage and genomic instability. Conversely, BRCA mutation seems to be an imbalanced defect, crudely inhibiting the upregulation of estrogen receptor expression and liganded transcriptional activity, whereas estrogen receptor-repressor functions become predominant. In BRCA-proficient cases, estrogen signaling orchestrates the activity of cell proliferation and differentiation with high safety, while upregulating the expression and DNA-stabilizing impact of BRCA genes. In turn, BRCA proteins promote estrogen signaling by proper estrogen synthesis via CYP19 gene regulation and by induction of the appropriate expression and transcriptional activity of estrogen receptors. In this exquisitely organized regulatory system, the dysfunction of each player may jeopardize genome stability and lead to severe chronic diseases, such as cancer development. Female organs, such as breast, endometrium, and ovary, exhibiting regular cyclic proliferative activity are particularly vulnerable in case of disturbances in either estrogen signaling or BRCA-mediated DNA repair. BRCA mutation carrier women may apparently be healthy or exhibit clinical signs of deficient estrogen signaling in spite of hyperestrogenism. Even women who enjoy sufficient compensatory DNA-defending activities are at risk of tumor development because many endogenous and environmental factors may jeopardize the mechanisms of extreme compensatory processes. Natural estrogens have numerous benefits in tumor prevention and therapy even in BRCA mutation carriers. There are no toxic effects even in sky-high doses and all physiologic cellular functions are strongly upregulated, while malignant tumor cells are recognized and killed in a Janus-faced manner.

A strong candidate for the breast and ovarian cancer susceptibility gene BRCA1.

Mark D. Shattuck,  Martin Bennett,  W. Q. Liu … (1994)
A strong candidate for the 17q-linked BRCA1 gene, which influences susceptibility to breast and ovarian cancer, has been identified by positional cloning methods. Probable predisposing mutations have been detected in five of eight kindreds presumed to segregate BRCA1 susceptibility alleles. The mutations include an 11-base pair deletion, a 1-base pair insertion, a stop codon, a missense substitution, and an inferred regulatory mutation. The BRCA1 gene is expressed in numerous tissues, including breast and ovary, and encodes a predicted protein of 1863 amino acids. This protein contains a zinc finger domain in its amino-terminal region, but is otherwise unrelated to previously described proteins. Identification of BRCA1 should facilitate early diagnosis of breast and ovarian cancer susceptibility in some individuals as well as a better understanding of breast cancer biology.

Sources of estrogen and their importance.

E.R Simpson (2003)
In premenopausal women, the ovaries are the principle source of estradiol, which functions as a circulating hormone to act on distal target tissues. However, in postmenopausal women when the ovaries cease to produce estrogen, and in men, this is no longer the case, because estradiol is no longer solely an endocrine factor. Instead, it is produced in a number of extragonadal sites and acts locally at these sites as a paracrine or even intracrine factor. These sites include the mesenchymal cells of adipose tissue including that of the breast, osteoblasts and chondrocytes of bone, the vascular endothelium and aortic smooth muscle cells, and numerous sites in the brain. Thus, circulating levels of estrogens in postmenopausal women and in men are not the drivers of estrogen action, they are reactive rather than proactive. This is because in these cases circulating estrogen originates in the extragonadal sites where it acts locally, and if it escapes local metabolism then it enters the circulation. Therefore, circulating levels reflect rather than direct estrogen action in postmenopausal women and in men. Tissue-specific regulation of CYP19 expression is achieved through the use of distinct promoters, each of which is regulated by different hormonal factors and second messenger signaling pathways. Thus, in the ovary, CYP19 expression is regulated by FSH which acts through cyclic AMP via the proximal promoter II, whereas in placenta the distal promoter I.1 regulates CYP19 expression in response to retinoids. In adipose tissue and bone by contrast, another distal promoter--promoter I.4--drives CYP19 expression under the control of glucocorticoids, class 1 cytokines and TNFalpha. The importance of this unique aspect of the tissue-specific regulation of aromatase expression lies in the fact that the low circulating levels of estrogens which are observed in postmenopausal women have little bearing on the concentrations of estrogen in, for example, a breast tumor, which can reach levels at least one order of magnitude greater than those present in the circulation, due to local synthesis within the breast. Thus, the estrogen which is responsible for breast cancer development, for the maintenance of bone mineralization and for the maintenance of cognitive function is not circulating estrogen but rather that which is produced locally at these specific sites within the breast, bone and brain. In breast adipose of breast cancer patients, aromatase activity and CYP19 expression are elevated. This occurs in response to tumor-derived factors such as prostaglandin E2 produced by breast tumor fibroblasts and epithelium as well as infiltrating macrophages. This increased CYP19 expression is associated with a switch in promoter usage from the normal adipose-specific promoter I.4 to the cyclic AMP responsive promoter, promoter II. Since these two promoters are regulated by different cohorts of transcription factors and coactivators, it follows that the differential regulation of CYP19 expression via alternative promoters in disease-free and cancerous breast adipose tissue may permit the development of selective aromatase modulators (SAMs) that target the aberrant overexpression of aromatase in cancerous breast, whilst sparing estrogen synthesis in other sites such as normal adipose tissue, bone and brain.

Aromatase deficiency in male and female siblings caused by a novel mutation and the physiological role of estrogens.

W. Fisher,  A MORISHIMA,  David Simpson … (1995)
The aromatase enzyme complex catalyzes the conversion of androgens to estrogens in a wide variety of tissues, including the ovary, testis, placenta, brain, and adipose tissue. Only a single human gene encoding aromatase P450 (CYP19) has been isolated; tissue-specific regulation is controlled in part by alternative promoters in a tissue-specific manner. We report a novel mutation in the CYP19 gene in a sister and brother. The 28-yr-old XX proband, followed since infancy, exhibited the cardinal features of the aromatase deficiency syndrome as recently defined. She had nonadrenal female pseudohermaphrodism at birth and underwent repair of the external genitalia, including a clitorectomy. At the age of puberty, she developed progressive signs of virilization, pubertal failure with no signs of estrogen action, hypergonadotropic hypogonadism, polycystic ovaries on pelvic sonography, and tall stature. The basal concentrations of plasma testosterone, androstenedione, and 17-hydroxyprogesterone were elevated, whereas plasma estradiol was low. Cyst fluid from the polycystic ovaries had a strikingly abnormal ratio of androstenedione and testosterone to estradiol and estrone. Hormone replacement therapy led to breast development, menses, resolution of ovarian cysts, and suppression of the elevated FSH and LH values. Her adult height is 177.6 cm (+2.5 SD). Her only sibling, an XY male, was studied at 24 yr of age. During both pregnancies, the mother exhibited signs of progressive virilization that regressed postpartum. The height of the brother was 204 cm (+3.7 SD) with eunuchoid skeletal proportions, and the weight was 135.1 kg (+2.1 SD). He was sexually fully mature and had macroorchidism. The plasma concentrations of testosterone (2015 ng/dL), 5 alpha-dihydrotestosterone (125 ng/dL), and androstenedione (335 ng/dL) were elevated; estradiol and estrone levels were less than 7 pg/mL. Plasma FSH and LH concentrations were more than 3 times the mean value. Plasma PRL was low; serum insulin-like growth factor I and GH-binding protein were normal. The bone age was 14 yr at a chronological age of 24 3/12 yr. Striking osteopenia was noted at the wrist. Bone mineral densitometric indexes of the lumbar spine (cancellous bone) and distal radius (cortical bone) were consistent with osteoporosis; the distal radius was -4.7 SD below the mean value for age- and sex-matched normal men; indexes of bone turnover were increased. Hyperinsulinemia, increased serum total and low density lipoprotein cholesterol, and triglycerides and decreased high density lipoprotein cholesterol were detected.(ABSTRACT TRUNCATED AT 400 WORDS)