Chronic Joint Pain in a Young Adult With Cystic Fibrosis 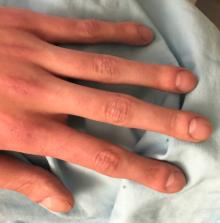 A 25-year-old male with end-stage cystic fibrosis (CF) with genotype F508del/F508del presented to the clinic complaining of bilateral knee and ankle pain. He had severe lung disease (forced expiratory volume 1 {FEV1} 19% of predicted), chronic colonization with achromobacter, malnutrition, and CF-related diabetes. On physical examination, he was found to have bilateral knee swelling as well as pain on flexion and extension of the wrists and ankles without erythema or warmth. He was empirically started on prednisone and tramadol; however, at a three-month follow-up visit, he remained symptomatic. He was sent for a whole-body bone scan, which was consistent with hypertrophic pulmonary osteoarthropathy (HPOA). He was started on highly effective modulator therapy with elexacaftor/tezacaftor/ivacaftor and symptoms spontaneously resolved without further intervention.

Simon Phillips,  Brian Carr,  Mushtaq Ahmed … (2008)
Digital clubbing, recognized by Hippocrates in the fifth century BC, is the outward hallmark of pulmonary hypertrophic osteoarthropathy, a clinical constellation that develops secondary to various acquired diseases, especially intrathoracic neoplasm. The pathogenesis of clubbing and hypertrophic osteoarthropathy has hitherto been poorly understood, but a clinically indistinguishable primary (idiopathic) form of hypertrophic osteoarthropathy (PHO) is recognized. This familial disorder can cause diagnostic confusion, as well as significant disability. By autozygosity methods, we mapped PHO to chromosome 4q33-q34 and identified mutations in HPGD, encoding 15-hydroxyprostaglandin dehydrogenase, the main enzyme of prostaglandin degradation. Homozygous individuals develop PHO secondary to chronically elevated prostaglandin E(2) levels. Heterozygous relatives also show milder biochemical and clinical manifestations. These findings not only suggest therapies for PHO, but also imply that clubbing secondary to other pathologies may be prostaglandin mediated. Testing for HPGD mutations and biochemical testing for HPGD deficiency in patients with unexplained clubbing might help to obviate extensive searches for occult pathology.

Stephen N Atkinson,  Gerard Fox (2004)
Digital clubbing is associated with many unrelated serious diseases but its pathogenesis remains a clinical enigma. It has been hypothesized that platelet clusters impacting in the distal vasculature mediate the morphological changes of clubbing. Since the multifunctional cytokines vascular endothelial growth factor (VEGF) and platelet-derived growth factor (PDGF) are released on platelet aggregation and are hypoxically regulated, the present study has examined their role in clubbing using immunohistochemistry. Basic fibroblast growth factor (bFGF), transforming growth factor-beta 1 (TGF-beta1), microvessel density, carbonic anhydrase IX (CAIX), hypoxia inducible factor (HIF)-1alpha, and HIF-2alpha were also measured. There was a significant increase in VEGF (p = 0.01), pKDR (p = 0.03), PDGF (p = 0.017), and HIF-1alpha and HIF-2alpha (p = 0.004 and p = 0.004, respectively) expression together with a significant increase in microvessel density (p = 0.03) in the stroma in clubbed digits compared with controls. There was no difference in CAIX (p = 0.25), TGF-beta1 (p = 0.66) or bFGF (p = 0.18) between affected and control groups. These findings suggest that VEGF and PDGF are released after platelet impaction and that their expression is hypoxically enhanced in the stroma after capillary occlusion. VEGF may synergize with PDGF in inducing the stromal and vascular changes present in digital clubbing. Copyright 2004 Pathological Society of Great Britain and Ireland. Published by John Wiley & Sons, Ltd.

L H Silveira,  M Martínez-Lavín,  C Pineda … (2016)
Hypertrophic osteoarthropathy (HOA) is characterized by the coexistence of digital clubbing and periosteal proliferation of the tubular bones. Localized vascular proliferation associated with platelet/endothelial cell activation are recognized features of this syndrome. Current knowledge suggests that HOA develops from the presence in the systemic circulation of one or more growth factors that are normally inactivated in the lungs. The nature of these purported growth factors has not yet been identified. Vascular endothelial growth factor (VEGF) has several features that may fit in with the pathogenesis of HOA. The objective of our study was to measure serum and plasma levels of VEGF in different groups of patients with HOA. We studied 24 patients with HOA; of these, in 12 the HOA was secondary to cyanotic congenital heart disease and in 7 to lung cancer, while 5 represented primary cases. As controls we studied 28 individuals without HOA; of these, 12 were apparently healthy individuals, 7 had cyanosis secondary to chronic obstructive pulmonary disease, and 9 had lung cancer. ELISA was used to measure serum and plasma levels of VEGF. Plasma levels of VEGF were significantly higher in the patients with primary HOA (median 46.2; range 19.4-398.8 pg/ml) and in those with lung cancer-HOA (median 75.5; range 24.6-166.7), compared to healthy controls (median 7.4; range: 0-26.1), p < 0.05. Serum VEGF levels were higher in patients with lung cancer and HOA (median 411.4; range 164.2-959.5 pg/ml) compared with lung cancer patients without HOA (median 74.5; range 13.2-205.4), p < 0.001. Patients with primary HOA and those with HOA and lung cancer have increased circulating levels of VEGF. This cytokine may play a role in the pathogenesis of HOA.

Self URI: This article is available from https://www.cureus.com/articles/64523-chronic-joint-pain-in-a-young-adult-with-cystic-fibrosis