Redox regulation in cancer : A double-edged sword with therapeutic potential 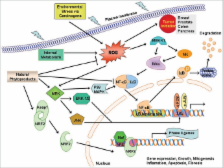 Oxidative stress, implicated in the etiology of cancer, results from an imbalance in the production of reactive oxygen species (ROS) and cell’s own antioxidant defenses. ROS deregulate the redox homeostasis and promote tumor formation by initiating an aberrant induction of signaling networks that cause tumorigenesis. Ultraviolet (UV) exposures, γ-radiation and other environmental carcinogens generate ROS in the cells, which can exert apoptosis in the tumors, thereby killing the malignant cells or induce the progression of the cancer growth by blocking cellular defense system. Cancer stem cells take the advantage of the aberrant redox system and spontaneously proliferate. Oxidative stress and gene-environment interactions play a significant role in the development of breast, prostate, pancreatic and colon cancer. Prolonged lifetime exposure to estrogen is associated with several kinds of DNA damage. Oxidative stress and estrogen receptor-associated proliferative changes are suggested to play important roles in estrogen-induced breast carcinogenesis. BRCA1, a tumor suppressor against hormone responsive cancers such as breast and prostate cancer, plays a significant role in inhibiting ROS and estrogen mediated DNA damage; thereby regulate the redox homeostasis of the cells. Several transcription factors and tumor suppressors are involved during stress response such as Nrf2, NFκB and BRCA1. A promising strategy for targeting redox status of the cells is to use readily available natural substances from vegetables, fruits, herbs and spices. Many of the phytochemicals have already been identified to have chemopreventive potential, capable of intervening in carcinogenesis.

Yohannes Mebratu,  Yohannes Tesfaigzi (2009)
Extracellular signal-regulated protein kinases 1 and 2 (ERK1/2) are members of the mitogen-activated protein kinase super family that can mediate cell proliferation and apoptosis. The Ras-Raf-MEK-ERK signaling cascade controlling cell proliferation has been well studied but the mechanisms involved in ERK1/2-mediated cell death are largely unknown. This review focuses on recent papers that define ERK1/2 translocation to the nucleus and the proteins involved in the cytosolic retention of activated ERK1/2. Cytosolic retention of ERK1/2 denies access to the transcription factor substrates that are responsible for the mitogenic response. In addition, cytosolic ERK1/2, besides inhibiting survival and proliferative signals in the nucleus, potentiates the catalytic activity of some proapoptotic proteins such as DAP kinase in the cytoplasm. Studies that further define the function of cytosolic ERK1/2 and its cytosolic substrates that enhance cell death will be essential to harness this pathway for developing effective treatments for cancer and chronic inflammatory diseases.

Phosphatase-mediated crosstalk between MAPK signaling pathways in the regulation of cell survival.

Jukka Westermarck,  Song Li,  Melissa Junttila (2008)
Mitogen-activated protein kinase (MAPK) pathways constitute a large modular network that regulates a variety of physiological processes, such as cell growth, differentiation, and apoptotic cell death. The function of the ERK pathway has been depicted as survival-promoting, in essence by opposing the proapoptotic activity of the stress-activated c-Jun NH(2)-terminal kinase (JNK)/p38 MAPK pathways. However, recently published work suggests that extracellular regulated kinase (ERK) pathway activity is suppressed by JNK/p38 kinases during apoptosis induction. In this review, we will summarize the current knowledge about JNK/p38-mediated mechanisms that negatively regulate the ERK pathway. In particular, we will focus on phosphatases (PP2A, MKPs) as inhibitors of ERK pathway activity in regulating apoptosis. A model proposed in this review places the negative regulation of the ERK pathway in a central position for the cellular decision-making process that determines whether cells will live or die in response to apoptosis-promoting signals. In addition, we will discuss the potential functional relevance of negative regulation of ERK pathway activity, for physiological and pathological conditions (e.g., cellular transformation).

Nrf2 as a master redox switch in turning on the cellular signaling involved in the induction of cytoprotective genes by some chemopreventive phytochemicals.

Joydeb Kundu,  Young-Joon Surh,  Hye Ran Na (2008)
A wide array of dietary phytochemicals have been reported to induce the expression of enzymes involved in both cellular antioxidant defenses and elimination/inactivation of electrophilic carcinogens. Induction of such cytoprotective enzymes by edible phytochemicals largely accounts for their cancer chemopreventive and chemoprotective activities. Nuclear factor-erythroid-2-related factor 2 (Nrf2) plays a crucial role in the coordinated induction of those genes encoding many stress-responsive and cytoptotective enzymes and related proteins. These include NAD(P)H:quinone oxidoreductase-1, heme oxygenase-1, glutamate cysteine ligase, glutathione S-transferase, glutathione peroxidase, thioredoxin, etc. In resting cells, Nrf2 is sequestered in the cytoplasm as an inactive complex with the repressor Kelch-like ECH-associated protein 1 (Keap1). The release of Nrf2 from its repressor is most likely to be achieved by alterations in the structure of Keap1. Keap1 contains several reactive cysteine residues that function as sensors of cellular redox changes. Oxidation or covalent modification of some of these critical cysteine thiols would stabilize Nrf2, thereby facilitating nuclear accumulation of Nrf2. After translocation into nucleus, Nrf2 forms a heterodimer with other transcription factors, such as small Maf, which in turn binds to the 5'-upstream CIS-acting regulatory sequence, termed antioxidant response elements (ARE) or electrophile response elements (EpRE), located in the promoter region of genes encoding various antioxidant and phase 2 detoxifying enzymes. Certain dietary chemopreventive agents target Keap1 by oxidizing or chemically modifying one or more of its specific cysteine thiols, thereby stabilizing Nrf2. In addition, phosphorylation of specific serine or threonine residues present in Nrf2 by upstream kinases may also facilitate the nuclear localization of Nrf2. Multiple mechanisms of Nrf2 activation by signals mediated by one or more of the upstream kinases, such as mitogen-activated protein kinases, phosphatidylionositol-3-kinase/Akt, protein kinase C, and casein kinase-2 have recently been proposed. This review highlights the cytoprotective gene expression induced by some representative dietary chemopreventive phytochemicals with the Nrf2-Keap1 system as a prime molecular target.