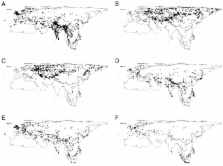 Boakes et al. compile and analyze a historical dataset of 170,000 bird sightings over two centuries and show how changing trends in data gathering may confound a true picture of biodiversity change.

Valerie Kapos,  John Lamoreux,  Taylor H Ricketts … (2005)
The Living Planet Index was developed to measure the changing state of the world's biodiversity over time. It uses time-series data to calculate average rates of change in a large number of populations of terrestrial, freshwater and marine vertebrate species. The dataset contains about 3000 population time series for over 1100 species. Two methods of calculating the index are outlined: the chain method and a method based on linear modelling of log-transformed data. The dataset is analysed to compare the relative representation of biogeographic realms, ecoregional biomes, threat status and taxonomic groups among species contributing to the index. The two methods show very similar results: terrestrial species declined on average by 25% from 1970 to 2000. Birds and mammals are over-represented in comparison with other vertebrate classes, and temperate species are over-represented compared with tropical species, but there is little difference in representation between threatened and non-threatened species. Some of the problems arising from over-representation are reduced by the way in which the index is calculated. It may be possible to reduce this further by post-stratification and weighting, but new information would first need to be collected for data-poor classes, realms and biomes.

Louise McRae,  Tamie A. J. Loh,  Sarah Whitmee … (2009)
The task of measuring the decline of global biodiversity and instituting changes to halt and reverse this downturn has been taken up in response to the Convention on Biological Diversity's 2010 target. It is an undertaking made more difficult by the complex nature of biodiversity and the consequent difficulty in accurately gauging its depletion. In the Living Planet Index, aggregated population trends among vertebrate species indicate the rate of change in the status of biodiversity, and this index can be used to address the question of whether or not the 2010 target has been achieved. We investigated the use of generalized additive models in aggregating large quantities of population trend data, evaluated potential bias that results from collation of existing trends, and explored the feasibility of disaggregating the data (e.g., geographically, taxonomically, regionally, and by thematic area). Our results show strengths in length and completeness of data, little evidence of bias toward threatened species, and the possibility of disaggregation into meaningful subsets. Limitations of the data set are still apparent, in particular the dominance of bird data and gaps in tropical-species population coverage. Population-trend data complement the longer-term, but more coarse-grained, perspectives gained by evaluating species-level extinction rates. To measure progress toward the 2010 target, indicators must be adapted and strategically supplemented with existing data to generate meaningful indicators in time. Beyond 2010, it is critical a strategy be set out for the future development of indicators that will deal with existing data gaps and that is intricately tied to the goals of future biodiversity targets.

Using Red List Indices to measure progress towards the 2010 target and beyond.

S Butchart,  Leon A. Bennun,  G Macé … (2005)
The World Conservation Union (IUCN) Red List is widely recognized as the most authoritative and objective system for classifying species by their risk of extinction. Red List Indices (RLIs) illustrate the relative rate at which a particular set of species change in overall threat status (i.e. projected relative extinction-risk), based on population and range size and trends as quantified by Red List categories. RLIs can be calculated for any representative set of species that has been fully assessed at least twice. They are based on the number of species in each Red List category, and the number changing categories between assessments as a result of genuine improvement or deterioration in status. RLIs show a fairly coarse level of resolution, but for fully assessed taxonomic groups they are highly representative, being based on information from a high proportion of species worldwide. The RLI for the world's birds shows that that their overall threat status has deteriorated steadily during the years 1988-2004 in all biogeographic realms and ecosystems. A preliminary RLI for amphibians for 1980-2004 shows similar rates of decline. RLIs are in development for other groups. In addition, a sampled index is being developed, based on a stratified sample of species from all major taxonomic groups, realms and ecosystems. This will provide extinction-risk trends that are more representative of all biodiversity.

Essays articulate a specific perspective on a topic of broad interest to scientists.

Publisher ID: 09-PLBI-E-3743R3
DOI: 10.1371/journal.pbio.1000385
PMC ID: 2879389
PubMed ID: 20532234
Copyright statement: Boakes et al. This is an open-access article distributed under the terms of the Creative Commons Attribution License, which permits unrestricted use, distribution, and reproduction in any medium, provided the original author and source are credited.