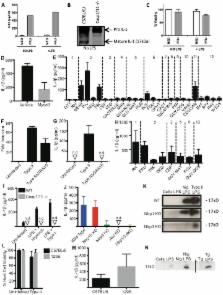 Induction of immunity that limits Toxoplasma gondii infection in mice is critically dependent on the activation of the innate immune response. In this study, we investigated the role of cytoplasmic nucleotide-binding domain and leucine-rich repeat containing a pyrin domain (NLRP) inflammasome sensors during acute toxoplasmosis in mice. We show that in vitro Toxoplasma infection of murine bone marrow-derived macrophages activates the NLRP3 inflammasome, resulting in the rapid production and cleavage of interleukin-1β (IL-1β), with no measurable cleavage of IL-18 and no pyroptosis. Paradoxically, Toxoplasma-infected mice produced large quantities of IL-18 but had no measurable IL-1β in their serum. Infection of mice deficient in NLRP3, caspase-1/11, IL-1R, or the inflammasome adaptor protein ASC led to decreased levels of circulating IL-18, increased parasite replication, and death. Interestingly, mice deficient in NLRP1 also displayed increased parasite loads and acute mortality. Using mice deficient in IL-18 and IL-18R, we show that this cytokine plays an important role in limiting parasite replication to promote murine survival. Our findings reveal T. gondii as a novel activator of the NLRP1 and NLRP3 inflammasomes in vivo and establish a role for these sensors in host resistance to toxoplasmosis.

Inflammasomes are multiprotein complexes that are a major component of the innate immune system. They contain “sensor” proteins that are responsible for detecting various microbial and environmental danger signals and function by activating caspase-1, an enzyme that mediates cleavage and release of the proinflammatory cytokines interleukin-1β (IL-1β) and IL-18. Toxoplasma gondii is a highly successful protozoan parasite capable of infecting a wide range of host species that have variable levels of resistance. We report here that T. gondii is a novel activator of the NLRP1 and NLRP3 inflammasomes in vivo and establish a role for these sensors in host resistance to toxoplasmosis. Using mice deficient in IL-18 and IL-18R, we show that the IL-18 cytokine plays a pivotal role by limiting parasite replication to promote murine survival.

The inflammasomes: guardians of the body.

Jurg Tschopp,  Fabio Martinon,  Annick Mayor (2008)
The innate immune system relies on its capacity to rapidly detect invading pathogenic microbes as foreign and to eliminate them. The discovery of Toll-like receptors (TLRs) provided a class of membrane receptors that sense extracellular microbes and trigger antipathogen signaling cascades. More recently, intracellular microbial sensors have been identified, including NOD-like receptors (NLRs). Some of the NLRs also sense nonmicrobial danger signals and form large cytoplasmic complexes called inflammasomes that link the sensing of microbial products and metabolic stress to the proteolytic activation of the proinflammatory cytokines IL-1beta and IL-18. The NALP3 inflammasome has been associated with several autoinflammatory conditions including gout. Likewise, the NALP3 inflammasome is a crucial element in the adjuvant effect of aluminum and can direct a humoral adaptive immune response. In this review, we discuss the role of NLRs, and in particular the inflammasomes, in the recognition of microbial and danger components and the role they play in health and disease.

Eric Kofoed,  Russell E Vance (2011)
Inflammasomes are a family of cytosolic multiprotein complexes that initiate innate immune responses to pathogenic microbes by activating the CASPASE1 (CASP1) protease 1,2 . Although genetic data support a critical role for inflammasomes in immune defense and inflammatory diseases 3 , the molecular basis by which individual inflammasomes respond to specific stimuli remains poorly understood. The inflammasome that contains the NLRC4 (NLR family, CARD domain containing C4) protein was previously shown to be activated in response to two distinct bacterial proteins, flagellin 4,5 and PrgJ 6 , a conserved component of pathogen-associated type III secretion systems. However, direct binding between NLRC4 and flagellin or PrgJ has never been demonstrated. A homolog of NLRC4, NAIP5 (NLR family, Apoptosis Inhibitory Protein 5), has been implicated in activation of NLRC4 7–11 , but is widely assumed to play only an auxiliary role 1,2 , since NAIP5 is often dispensable for NLRC4 activation 7,8 . However, Naip5 is a member of a small multigene family 12 , raising the possibility of redundancy and functional specialization among Naip genes. Indeed, we show here that different NAIP paralogs dictate the specificity of the NLRC4 inflammasome for distinct bacterial ligands. In particular, we found that activation of endogenous NLRC4 by bacterial PrgJ requires NAIP2, a previously uncharacterized member of the NAIP gene family, whereas NAIP5 and NAIP6 activate NLRC4 specifically in response to bacterial flagellin. We dissected the biochemical mechanism underlying the requirement for NAIP proteins by use of a reconstituted NLRC4 inflammasome system. We found that NAIP proteins control ligand-dependent oligomerization of NLRC4 and that NAIP2/NLRC4 physically associates with PrgJ but not flagellin, whereas NAIP5/NLRC4 associates with flagellin but not PrgJ. Taken together, our results identify NAIPs as immune sensor proteins and provide biochemical evidence for a simple receptor-ligand model for activation of the NAIP/NLRC4 inflammasomes.

G.G. and K.M.C. contributed equally to the paper.