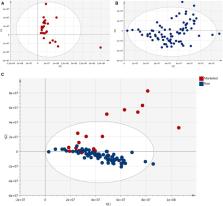 Background: Saint John’s wort ( Hypericum perforatum L., HP) is commonly registered in Europe under the THR scheme (Traditional Herbal Registration) or licensed as a medicine. Nonetheless unregulated medical products and food supplements are accessible through the internet which are often of poor quality. The species’ natural distribution stretches through large regions of Europe to China and four subspecies have been distinguished. When compared to the European Pharmacopoeia reference, the presence of additional compounds was linked to so-called Chinese HP.

Aim: In order to obtain an integrated picture of the entire chemoprofile, the chemical composition of HP materia prima was studied using a combination of techniques well-established in the relevant industries. The impact of phytogeographic factors on the materia prima can shed light on whether the variability of the final products is strongly influenced by these factors of whether they relate to poor processing, adulteration, or other factors linked to the processing of the material.

Methods: Eighty-six Hypericum samples (77 H. perforatum) were collected from 14 countries. Most were authenticated and harvested in the wild; others came as roughly ground material from commercial cultivations, markets and pharmacies. The samples were analyzed using HPTLC and 1H-NMR-based principal component analysis (PCA).

Results and Discussion: Limited chemical variability was found. Nonetheless, the typical fingerprint of Chinese HP was observed in each specimen from China. Additional compounds were also detected in some samples collected in Spain. Rutin is not necessarily present in the crude material. The variability previously found in the marketed products can be ascribed only partially to the geographical origin of harvested material, but mainly to the plant part harvested, closely related to harvesting techniques, processing and probably time of harvest.

Conclusion: HP can be sourced in a consistent composition (and thus quality) from different geographical sources. However, chemical variability needs to be accounted for when evaluating what is considered authentic good material. Therefore, the processing and good practice are all stages of primary importance, calling for a better (self-)regulation and quality assurance along the value chain of an herbal medical product or botanical.

Jack van Loon,  Paola Montoro (2009)
The chemical analysis and quality control of Ginkgo leaves, extracts, phytopharmaceuticals and some herbal supplements is comprehensively reviewed. The review is an update of a similar, earlier review in this journal [T.A. van Beek, J. Chromatogr. A 967 (2002) 21-55]. Since 2001 over 3000 papers on Ginkgo biloba have appeared, and about 400 of them pertain to chemical analysis in a broad sense and are cited herein. The more important ones are discussed and, where relevant, compared with the best methods published prior to 2002. In the same period over 2500 patents were filed on Ginkgo and the very few related to analysis are mentioned as well. Important constituents include terpene trilactones, i.e. ginkgolide A, B, C, J and bilobalide, flavonol glycosides, biflavones, proanthocyanidins, alkylphenols, simple phenolic acids, 6-hydroxykynurenic acid, 4-O-methylpyridoxine and polyprenols. In the most common so-called "standardised" Ginkgo extracts and phytopharmaceuticals several of these classes are no longer present. About 130 new papers deal with the analysis of the terpene trilactones. They are mostly extracted with methanol or water or mixtures thereof. Supercritical fluid extraction and pressurised water extraction are also possible. Sample clean-up is mostly by liquid-liquid extraction with ethyl acetate although no sample clean-up at all in combination with LC/MS/MS is gaining in importance. Separation and detection can be routinely carried out by RP-HPLC with ELSD, RI or MS, or by GC/FID or GC/MS after silylation. Hydrolysis followed by LC/MS allows the simultaneous analysis of terpene trilactones and flavonol aglycones. No quantitative procedure for all major flavonol glycosides has yet been published because they are not commercially available. The quantitation of a few available glycosides has been carried out but does not serve a real purpose. After acidic hydrolysis to the aglycones quercetin, kaempferol and isorhamnetin and separation by HPLC, quantitation is straightforward and yields by recalculation an estimation of the original total flavonol glycoside content. A profile of the genuine flavonol glycosides can detect poor storage or adulteration. Although the toxicity of Ginkgo alkylphenols upon oral administration has never been undoubtedly proven, most suppliers limit their content in extracts to 5 ppm and dozens of papers on their analysis were published. One procedure in which a methanolic extract is directly injected on a C8 HPLC column appears superior in terms of sensitivity (<5 ppm), separation, simplicity and validation and will be incorporated in the European Pharmacopoeia. Alternatively GC/MS and ELISA methods can be used. A sharp contrast to the plethora of papers on terpene trilactones, flavonol glycosides, and ginkgolic acids forms the low number of papers on biflavones, proanthocyanidins, simple phenolics, simple acids, and other constituents that make up the remaining 70% of Ginkgo standardised extracts. More research in this direction is clearly needed. For the analysis of Ginkgo proanthocyanidins (7%) for instance, no reliable assays are yet existing. Finally the growing literature on pharmacokinetic and fingerprinting studies of Ginkgo is briefly summarised.

Investigations on the in vivo wound healing potential of Hypericum perforatum L.

Ipek Suntar,  Esra Akkol,  Demet Yılmazer … (2010)
Olive oil extract of the flowering aerial parts of Hypericum perforatum L. (Hypericaceae) is a popular folk remedy for the treatment of wounds in Turkey. In order to prove the claimed utilization of the plant, the effects of the extracts and the fractions were investigated by using bioassay-guided procedures. For the wound healing activity assessment, in vivo excision and incision wound models were applied. For the anti-inflammatory activity, an in vivo model, based on the inhibition of acetic acid-induced increase in capillary permeability was used as well. Moreover, a parallel study was run on Hypericum scabrum L., which is a widespread species of the gender but not known as a folk remedy for wound healing, to provide a preliminary data to compare and emphasize the selection of correct plant species. Initial investigations proved that the olive oil extract of Hypericum perforatum has a significant wound healing effect on excision (5.1-82.6% inhibition) and circular incision (20.2-100.0% inhibition) wound models. In order to determine the active wound healing ingredient(s), aerial parts of the plant was extracted with ethanol, noteworthy wound healing activity profile was observed with the wound models; between 18.3% and 95.6% in excision model and from 13.9% to 100.0% inhibitions in incision model were determined. The ethanolic extract was then submitted to successive solvent extractions with n-hexane, chloroform and ethyl acetate (EtOAc). Each solvent extract was also applied on the same wound models, consequently, EtOAc subextract was found to be the most active one by inhibiting wounds between 17.9% and 100.0% in excision model, subsequently between 9.4% and 100.0% in incision model. However, all subfractions obtained from the EtOAc subextract using Sephadex LH-20 column chromatography showed wound healing activity not more than the whole EtOAc subextract, which revealed that a possible synergistic activity that might be questioned. Among the active Sephadex fractions, Fr. A further yielded hyperoside, isoquercitrin, rutin and (-)-epicatechin and Fr. B yielded hypericin as the major components. Moreover, a dose-dependent anti-inflammatory activity was found for the ethanol extract, EtOAc subextract and Sephadex fractions of Hypericum perforatum. These results suggest that anti-inflammatory activity of the active fractions might have a contributory role in the wound healing effect of the plant. Results of the present study have proved that aerial parts of Hypericum perforatum possess remarkable wound healing and anti-inflammatory activities supporting the folkloric assertion of the plant in Turkish folk medicine. Flavonoids [hyperoside, isoquercitrin, rutin and (-)-epicatechin] and naphthoquinones (hypericins) were found as the active components of Hypericum perforatum. On the other hand, ethanol extract of Hypericum scabrum showed neither remarkable wound healing nor anti-inflammatory activity demonstrating the importance of correct plant species selection in therapeutic applications. Copyright 2009 Elsevier Ireland Ltd. All rights reserved.