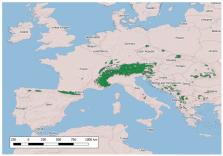 Even if it is an important achievement from a biodiversity conservation perspective, the documented increase in abundance of the four native European wild Caprinae ( Rupicapra rupicapra, R. pyrenaica, Capra ibex, C. pyrenaica) can also be a matter of concern, since tighter and more frequent contact with sympatric livestock implies a greater risk of transmission of emerging and re-emerging pathogens. This article reviews the main transmissible diseases that, in a European scenario, are of greater significance from a conservation perspective. Epidemics causing major demographic downturns in wild Caprinae populations during recent decades were often triggered by pathogens transmitted at the livestock/wildlife interface.

Population density and distribution of the four native European wild Caprines ( Rupicapra rupicapra, Rupicapra pyrenaica, Capra ibex, Capra pyrenaica) have increased in recent decades. The improved conservation status of this valuable wildlife, while a welcome event in general terms, is at the same time a matter of concern since, intuitively, frequent and tighter contacts with sympatric livestock imply a greater risk of cross-transmission of emerging and re-emerging pathogens, and offer unexpected opportunities for pathogens to spread, persist and evolve. This article recalls the transmissible diseases that are perceived in Europe to be of major significance from a conservation perspective, namely brucellosis (BRC) by Brucella melitensis, infectious kerato-conjunctivitis (IKC) by Mycoplasma conjunctivae, pestivirosis (PV) by the border disease virus strain 4 and mange by Sarcoptes scabiei. Special emphasis has been put on the epidemiological role played by small domestic ruminants, and on key knowledge needed to implement evidence-based prevention and control strategies. Remarkably, scientific evidence demonstrates that major demographic downturns in affected wild Caprinae populations in recent decades have often been triggered by pathogens cross-transmitted at the livestock/wildlife interface.

B Garin-Bastuji,  C. Saegerman,  J. Godfroid … (2013)
The epidemiological link between brucellosis in wildlife and brucellosis in livestock and people is widely recognised. When studying brucellosis in wildlife, three questions arise: (i) Is this the result of a spillover from livestock or a sustainable infection in one or more host species of wildlife? (ii) Does wildlife brucellosis represent a reservoir of Brucella strains for livestock? (iii) Is it of zoonotic concern? Despite their different host preferences, B. abortus and B. suis have been isolated from a variety of wildlife species, whereas B. melitensis is rarely reported in wildlife. The pathogenesis of Brucella spp. in wildlife reservoirs is not yet fully defined. The prevalence of brucellosis in some wildlife species is very low and thus the behaviour of individual animals, and interactions between wildlife and livestock, may be the most important drivers for transmission. Since signs of the disease are non-pathognomonic, definitive diagnosis depends on laboratory testing, including indirect tests that can be applied to blood or milk, as well as direct tests (classical bacteriology and methods based on the polymerase chain reaction [PCR]). However, serological tests cannot determine which Brucella species has induced anti-Brucella antibodies in the host. Only the isolation of Brucella spp. (or specific DNA detection by PCR) allows a definitive diagnosis, using classical or molecular techniques to identify and type specific strains. There is as yet no brucellosis vaccine that demonstrates satisfactory safety and efficacy in wildlife. Therefore, controlling brucellosis in wildlife should be based on good management practices. At present, transmission of Brucella spp. from wildlife to humans seems to be linked to the butchering of meat and dressing of infected wild or feral pig carcasses in thedeveloped world, and infected African buffalo in the developing world. In the Arctic, the traditional consumption of raw bone marrow and the internal organs of freshly killed caribou or reindeer is an important risk factor.

Luís León-Vizcaíno,  Raúl De La Rosa,  María Cubero … (1999)
The Spanish ibex (Capra pyrenaica hispanica) population of the "Sierras de Cazorla, Segura y Las Villas" Nature Park (Spain) was isolated as the result of a severe epidemic of sarcoptic mange. In this context, the dynamic characteristics of the disease were analyzed in a wild group consisting of 35 animals from the beginning of the epizootic (when the mating period started) to the extinction of the population due to mange. Monthly tracking permitted the sequential characterization of the pathology in each animal. The duration of the disease was 2 to 3 mo, evolving to severe disease and terminating in death. Incidence and prevalence rates in terms of morbidity and severity, and mortality and lethality were calculated. At the end of the mating season, 81% of the population were affected. There were no statistically significant differences in severity of the disease across sex or age categories of the animals. Most of the carcasses were found in caves used as refuge and/or near rivers or streams. Additionally, 46 of the 63 (73%) ibex captured in different areas of the nature park were naturally infected with the Sarcoptes scabiei. Infected ibex were examined for number of mites during the initial stage of the disease (n = 3), in the development stage (n = 12), in the consolidation stage (n = 17), and in the chronic stage (n = 14). The prevalence of mites in different anatomical regions was determined in each of these phases of the infection. A histological study of the skin lesions was conducted in 22 animals. Both the clinical and the pathological (macroscopic and microscopic) aspects of the sarcoptic mange in Spanish ibex corresponded to the classic description of sarcoptic mange in other wild and domestic small ruminants.

E Fromont,  D. Gauthier,  C Richomme (2006)
The risk for a pathogen to cross the species barrier depends on the rate of efficient contacts between the species. However, contact rates between species have rarely been estimated from observations. Here we estimate contact rates and exposure of chamois Rupicapra rupicapra and Alpine ibex Capra ibex exposed to domestic pasteurellosis and brucellosis carried by sheep or cattle herds summering in mountain pastures. We use field observation data on animal positions treated in a geographic information system (GIS). Comparing 10 pastures, we show that the management of domestic herds influences the risk of inter-species transmission. Exposure to direct transmission of pasteurellosis is high when herds are not guarded nor enclosed, whereas exposure to indirect transmission of brucellosis is increased on epidemiological dangerous points such as salt deposits. Our preliminary results need further investigation, but they underline the importance of both herd management and pathogen transmission mode when the aim is to reduce the risk of contamination of wild populations by a pathogen associated with domestic pathogens.