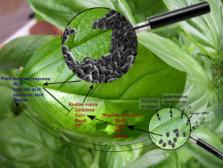 The significant increase in foodborne outbreaks caused by contaminated fresh produce, such as alfalfa sprouts, lettuce, melons, tomatoes and spinach, during the last 30 years stimulated investigation of the mechanisms of persistence of human pathogens on plants. Emerging evidence suggests that Salmonella enterica and Escherichia coli, which cause the vast majority of fresh produce outbreaks, are able to adhere to and to form biofilms on plants leading to persistence and resistance to disinfection treatments, which subsequently can cause human infections and major outbreaks. In this review, we present the current knowledge about host, bacterial and environmental factors that affect the attachment to plant tissue and the process of biofilm formation by S. enterica and E. coli, and discuss how biofilm formation assists in persistence of pathogens on the plants. Mechanisms used by S. enterica and E. coli to adhere and persist on abiotic surfaces and mammalian cells are partially similar and also used by plant pathogens and symbionts. For example, amyloid curli fimbriae, part of the extracellular matrix of biofilms, frequently contribute to adherence and are upregulated upon adherence and colonization of plant material. Also the major exopolysaccharide of the biofilm matrix, cellulose, is an adherence factor not only of S. enterica and E. coli, but also of plant symbionts and pathogens. Plants, on the other hand, respond to colonization by enteric pathogens with a variety of defence mechanisms, some of which can effectively inhibit biofilm formation. Consequently, plant compounds might be investigated for promising novel antibiofilm strategies.

J Costerton,  Z Lewandowski,  D E Caldwell … (1995)
Direct observations have clearly shown that biofilm bacteria predominate, numerically and metabolically, in virtually all nutrient-sufficient ecosystems. Therefore, these sessile organisms predominate in most of the environmental, industrial, and medical problems and processes of interest to microbiologists. If biofilm bacteria were simply planktonic cells that had adhered to a surface, this revelation would be unimportant, but they are demonstrably and profoundly different. We first noted that biofilm cells are at least 500 times more resistant to antibacterial agents. Now we have discovered that adhesion triggers the expression of a sigma factor that derepresses a large number of genes so that biofilm cells are clearly phenotypically distinct from their planktonic counterparts. Each biofilm bacterium lives in a customized microniche in a complex microbial community that has primitive homeostasis, a primitive circulatory system, and metabolic cooperativity, and each of these sessile cells reacts to its special environment so that it differs fundamentally from a planktonic cell of the same species.

Frédéric Brunner,  Birgit Kemmerling,  Thorsten Nürnberger … (2004)
Innate immunity constitutes the first line of defense against attempted microbial invasion, and it is a well-described phenomenon in vertebrates and insects. Recent pioneering work has revealed striking similarities between the molecular organization of animal and plant systems for nonself recognition and anti-microbial defense. Like animals, plants have acquired the ability to recognize invariant pathogen-associated molecular patterns (PAMPs) that are characteristic of microbial organisms but which are not found in potential host plants. Such structures, also termed general elicitors of plant defense, are often indispensable for the microbial lifestyle and, upon receptor-mediated perception, inevitably betray the invader to the plant's surveillance system. Remarkable similarities have been uncovered in the molecular mode of PAMP perception in animals and plants, including the discovery of plant receptors resembling mammalian Toll-like receptors or cytoplasmic nucleotide-binding oligomerization domain leucine-rich repeat proteins. Moreover, molecular building blocks of PAMP-induced signaling cascades leading to the transcriptional activation of immune response genes are shared among the two kingdoms. In particular, nitric oxide as well as mitogen-activated protein kinase cascades have been implicated in triggering innate immune responses, part of which is the production of antimicrobial compounds. In addition to PAMP-mediated pathogen defense, disease resistance programs are often initiated upon plant-cultivar-specific recognition of microbial race-specific virulence factors, a recognition specificity that is not known from animals.

G O’Toole,  Gayle Davey (2000)
Biofilms are complex communities of microorganisms attached to surfaces or associated with interfaces. Despite the focus of modern microbiology research on pure culture, planktonic (free-swimming) bacteria, it is now widely recognized that most bacteria found in natural, clinical, and industrial settings persist in association with surfaces. Furthermore, these microbial communities are often composed of multiple species that interact with each other and their environment. The determination of biofilm architecture, particularly the spatial arrangement of microcolonies (clusters of cells) relative to one another, has profound implications for the function of these complex communities. Numerous new experimental approaches and methodologies have been developed in order to explore metabolic interactions, phylogenetic groupings, and competition among members of the biofilm. To complement this broad view of biofilm ecology, individual organisms have been studied using molecular genetics in order to identify the genes required for biofilm development and to dissect the regulatory pathways that control the plankton-to-biofilm transition. These molecular genetic studies have led to the emergence of the concept of biofilm formation as a novel system for the study of bacterial development. The recent explosion in the field of biofilm research has led to exciting progress in the development of new technologies for studying these communities, advanced our understanding of the ecological significance of surface-attached bacteria, and provided new insights into the molecular genetic basis of biofilm development.

Funding Information Preparation of this review was supported by the Israel Science Foundation (ISF) (Grant No. 914/11) and by the Karolinska Institutet.