Chemistry of the Retinoid (Visual) Cycle 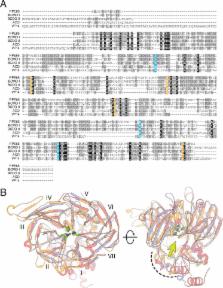 A decade of molecular biology of retinoic acid receptors.

P Chambon,  Frans Vinberg (1996)
Retinoids play an important role in development, differentiation, and homeostasis. The discovery of retinoid receptors belonging to the superfamily of nuclear ligand-activated transcriptional regulators has revolutionized our molecular understanding as to how these structurally simple molecules exert their pleiotropic effects. Diversity in the control of gene expression by retinoid signals is generated through complexity at different levels of the signaling pathway. A major source of diversity originates from the existence of two families of retinoid acid (RA) receptors (R), the RAR isotypes (alpha, beta, and gamma) and the three RXR isotypes (alpha, beta, and gamma), and their numerous isoforms, which bind as RXR/RAR heterodimers to the polymorphic cis-acting response elements of RA target genes. The possibility of cross-modulation (cross-talk) with cell-surface receptors signaling pathways, as well as the finding that RARs and RXRs interact with multiple putative coactivators and/or corepressors, generates additional levels of complexity for the array of combinatorial effects that underlie the pleiotropic effects of retinoids. This review focuses on recent developments, particularly in the area of structure-function relationships.

Isoprenoid biosynthesis: the evolution of two ancient and distinct pathways across genomes.

R Croteau,  W. Martin,  Angela Lange … (2000)
Isopentenyl diphosphate (IPP) is the central intermediate in the biosynthesis of isoprenoids, the most ancient and diverse class of natural products. Two distinct routes of IPP biosynthesis occur in nature: the mevalonate pathway and the recently discovered deoxyxylulose 5-phosphate (DXP) pathway. The evolutionary history of the enzymes involved in both routes and the phylogenetic distribution of their genes across genomes suggest that the mevalonate pathway is germane to archaebacteria, that the DXP pathway is germane to eubacteria, and that eukaryotes have inherited their genes for IPP biosynthesis from prokaryotes. The occurrence of genes specific to the DXP pathway is restricted to plastid-bearing eukaryotes, indicating that these genes were acquired from the cyanobacterial ancestor of plastids. However, the individual phylogenies of these genes, with only one exception, do not provide evidence for a specific affinity between the plant genes and their cyanobacterial homologues. The results suggest that lateral gene transfer between eubacteria subsequent to the origin of plastids has played a major role in the evolution of this pathway.