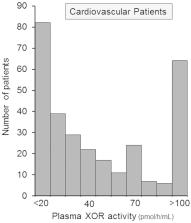 Background: The mechanisms of the increased plasma xanthine oxidoreductase (XOR) activity in outpatients with cardiovascular disease were unclear.

Methods and Results: A total of 372 outpatients were screened, and 301 outpatients with cardiovascular disease were prospectively analyzed. Blood samples were collected from patients who visited a daily cardiovascular outpatient clinic. Patients with diabetes mellitus (DM) were significantly more likely to be classified into the high-XOR group (≥100 pg/h/mL; 50%) than the low-XOR group (<100 pmol/h/mL; 28.7%). On multivariate logistic regression analysis, DM (OR, 2.683; 95% CI: 1.441–4.996) was independently associated with high plasma XOR activity in all cohorts. In the diabetic cardiovascular disease patients (n=100), median body mass index (BMI) in the high-XOR group (28.0 kg/m 2; IQR, 25.2–29.4 kg/m 2, n=32) was significantly higher than in the low-XOR group (23.6 kg/m 2; IQR, 21.2–25.7 kg/m 2, n=68), and BMI was independently associated with high plasma XOR activity (OR, 1.340; 95% CI: 1.149–1.540). Plasma hydrogen peroxide was significantly higher in DM patients with high plasma XOR activity and obesity (>22 kg/m 2) than in other patients.

Peter M. Brownlee (2001)
Diabetes-specific microvascular disease is a leading cause of blindness, renal failure and nerve damage, and diabetes-accelerated atherosclerosis leads to increased risk of myocardial infarction, stroke and limb amputation. Four main molecular mechanisms have been implicated in glucose-mediated vascular damage. All seem to reflect a single hyperglycaemia-induced process of overproduction of superoxide by the mitochondrial electron-transport chain. This integrating paradigm provides a new conceptual framework for future research and drug discovery.

José Valls,  Jose Viña,  Rafael Márquez … (2002)
The aim of this work was to study the mechanism of free radical formation in type 1 diabetes and its possible prevention. We have found oxidation of blood glutathione and an increase in plasma lipoperoxide levels in both human type 1 diabetes and experimental diabetes. Peroxide production by mitochondria does not increase in diabetes. On the contrary, the activity of xanthine oxidase, a superoxide-generating enzyme, increases in liver and plasma of diabetic animals. The increase in plasma xanthine oxidase activity may be explained by the increase in the hepatic release of this enzyme, which is not due to nonspecific membrane damage: release of other hepatic enzymes, such as the amino transferases, does not increase in diabetes. Superoxide formation by aortic rings of rabbits increases significantly in diabetes. This is completely inhibited by allopurinol, an inhibitor of xanthine oxidase. Heparin, which releases xanthine oxidase from the vessel wall, also decreases superoxide formation by aortic rings of diabetic animals. Treatment with allopurinol decreases oxidative stress in type 1 diabetic patients: hemoglobin glycation, glutathione oxidation, and the increase in lipid peroxidation are prevented. These results may have clinical significance in the prevention of late-onset vascular complications of diabetes.

Protein kinase C activation and the development of diabetic complications.

Paul King,  D. Koya,  Peter Kahn (1998)
Recent studies have identified that the activation of protein kinase C (PKC) and increased diacylglycerol (DAG) levels initiated by hyperglycemia are associated with many vascular abnormalities in retinal, renal, and cardiovascular tissues. Among the various PKC isoforms, the beta- and delta-isoforms appear to be activated preferentially in the vasculatures of diabetic animals, although other PKC isoforms are also increased in the renal glomeruli and retina. The glucose-induced activation of PKC has been shown to increase the production of extracellular matrix and cytokines; to enhance contractility, permeability, and vascular cell proliferation; to induce the activation of cytosolic phospholipase A2; and to inhibit Na+-K+-ATPase. The synthesis and characterization of a specific inhibitor for PKC-beta isoforms have confirmed the role of PKC activation in mediating hyperglycemic effects on vascular cells, as described above, and provide in vivo evidence that PKC activation could be responsible for abnormal retinal and renal hemodynamics in diabetic animals. Transgenic mice overexpressing PKC-beta isoform in the myocardium developed cardiac hypertrophy and failure, further supporting the hypothesis that PKC-beta isoform activation can cause vascular dysfunctions. Interestingly, hyperglycemia-induced oxidative stress may also mediate the adverse effects of PKC-beta isoforms by the activation of the DAG-PKC pathway, since treatment with D-alpha-tocopherol was able to prevent many glucose-induced vascular dysfunctions and inhibit DAG-PKC activation. Clinical studies are now in progress to determine whether PKC-beta inhibition can prevent diabetic complications.

This article is licensed under a Creative Commons [Attribution-NonCommercial-NoDerivatives 4.0 International] license.