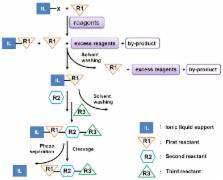 This review aims to provide a comprehensive overview of the recent advances made in the field of ionic liquids in peptide chemistry and peptide analytics.

S Kent,  P E Dawson,  T W Muir … (1994)
A simple technique has been devised that allows the direct synthesis of native backbone proteins of moderate size. Chemoselective reaction of two unprotected peptide segments gives an initial thioester-linked species. Spontaneous rearrangement of this transient intermediate yields a full-length product with a native peptide bond at the ligation site. The utility of native chemical ligation was demonstrated by the one-step preparation of a cytokine containing multiple disulfides. The polypeptide ligation product was folded and oxidized to form the native disulfide-containing protein molecule. Native chemical ligation is an important step toward the general application of chemistry to proteins.

Stephen B H Kent (2009)
This tutorial review outlines the modern ligation methods that enable the efficient total chemical synthesis of enzymes and other protein molecules. Key to this success is the chemoselective reaction of unprotected synthetic peptides ('chemical ligation'). Notably, native chemical ligation enables the reaction of two unprotected peptides in aqueous solution at neutral pH to form a single product in near quantitative yield. Full-length synthetic polypeptides are folded to form the defined tertiary structure of the target protein molecule, which is characterized by mass spectrometry, NMR, and X-ray crystallography, in addition to biochemical and/or biological activity.

Tilman M Hackeng,  Matt Griffin,  Timothy Dawson (1999)
The total chemical synthesis of proteins has great potential for increasing our understanding of the molecular basis of protein function. The introduction of native chemical ligation techniques to join unprotected peptides next to a cysteine residue has greatly facilitated the synthesis of proteins of moderate size. Here, we describe a straightforward methodology that has enabled us to rapidly analyze the compatibility of the native chemical ligation strategy for X-Cys ligation sites, where X is any of the 20 naturally occurring amino acids. The simplified methodology avoids the necessity of specific amino acid thioester linkers or alkylation of C-terminal thioacid peptides. Experiments using matrix-assisted laser-desorption ionization MS analysis of combinatorial ligations of LYRAX-C-terminal thioester peptides to the peptide CRANK show that all 20 amino acids are suitable for ligation, with Val, Ile, and Pro representing less favorable choices because of slow ligation rates. To illustrate the method's utility, two 124-aa proteins were manually synthesized by using a three-step, four-piece ligation to yield a fully active human secretory phospholipase A(2) and a catalytically inactive analog. The combination of flexibility in design with general access because of simplified methodology broadens the applicability and versatility of chemical protein synthesis.