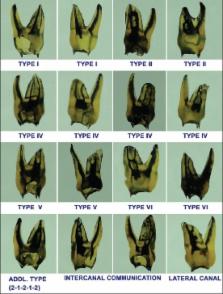 To investigate the root canal configuration of permanent maxillary first molar in Khasi population of Meghalaya.

Sixty (60) permanent maxillary first molars collected from patients of Khasi population of Meghalaya were studied using canal staining and clearing technique. Observations of the number of roots, root canal configuration, lateral canal, apical delta, and presence of the additional type of canals were made.

In Khasi population of Meghalaya, the most prevalent root canal configuration in the mesiobuccal root is Type IV followed by Type I and Type II. MB2 canals are present in more than 65% cases. In palatal and distobuccal roots, Type I configuration is present in most cases. Racial divergence may be responsible for such variations.

Root and canal morphology of permanent mandibular molars in a Sudanese population.

N. Abu Bakar,  H. Ahmed,  Karim Ibrahim … (2007)
To investigate variations in the root canal systems of first and second permanent mandibular molar teeth in a Sudanese population using a clearing technique. Two hundred extracted first and second permanent mandibular molars from three cities in the state of Khartoum were studied. Access cavities were prepared and pulp tissue was removed by immersion in 5% sodium hypochlorite under ultrasonication; Indian ink was then injected into the root canal systems assisted by a vacuum applied apically. The teeth were rendered clear by demineralization and immersion in methyl salicylate before evaluation. The following observations were made (i) number of roots and their morphology; (ii) number of root canals per tooth; (iii) number of root canals per root and (iv) root canal configuration. Overall 59% of mandibular first molars had four canals with 3% having a third distolingual root. Seventy-eight per cent of second mandibular molars had two separate flat roots, whilst 10% were C-shaped. The most common canal system configurations were type IV (73%) and type II (14%). Inter-canal communications were more common in the mesial roots. The prevalence of inter-canal communications was 65% in first molars and 49% in second molars. In this sample of Sudanese teeth, 59% of the mandibular first permanent molars had four root canals whilst 10% of the mandibular second molars had C-shaped roots/canals.

Xi-Li Weng,  Shi-Bin B Yu,  Shou-Liang Zhao … (2009)
The purpose of this study was to investigate the canal morphology of 504 maxillary permanent teeth of subjects of Han nationality in Chinese Guanzhong area. Maxillary permanent teeth were randomly collected in Guanzhong area. After regular preparation, the teeth were immersed into ink without preparing access cavities and then put into hyperbaric oxygen chamber (0.6 Mpa) for 2 hours to let the ink penetrate into root canal from apical foramen, apical deltas and foramen of lateral canals under stable positive pressure. After demineralization and clearing, the following observations were made: (1) number of root canals, (2) root canal configuration by using Vertucci's classification, (3) presence of lateral canals, and (4) frequency of apical deltas. All the teeth were well-stained, and the fine details were well-revealed. Apical deltas (12.2%-83.3%) and lateral canals (13.7%-68.8%) could be frequently found in all types of maxillary teeth. Most of central incisors (95.8%), lateral incisors (91.4%), and canines (75.4%) displayed type I canal configuration, whereas most of first premolars (87.3%) and second premolars (72.3%) possessed 2 canals with type II, IV, or VI canal configuration. The majority of distobuccal roots and palatal roots of first molars (88.9%, 97.8%), second molars (92.0%, 94.0%), and third molars (87.5%, 91.6%) possessed type I canal configuration. The prevalence of mesiobuccal roots with type I configuration was 66.7% in maxillary first molars, 82% in second molars, and 62.5% in third molars. The modified technique of canal staining can effectively reveal detailed root canal system. The canal configuration of maxillary teeth in subjects of Han nationality in Chinese Guanzhong area is consistent with previous reports in other races.

Canal configuration of the mesiobuccal root of the maxillary first molar of a Japanese sub-population.

G Hata,  Nicholas Toda,  S Hayami … (1999)
The aim of this study was to determine the percentage of anatomical canal configurations of the mesiobuccal root of the maxillary first molar in Japanese patients. Three hundred teeth were obtained from general dentists who knew absolutely that they were extracted from Japanese patients. The distobuccal and palatal roots were amputated for radiographic convenience. Preoperative radiographs were taken of the remaining crown and mesiobuccal root (MBR) from mesiodistal and buccopalatal directions for each tooth. Routine endodontic access cavities were prepared and size 08 files were placed through the orifice into the MBR until they were seen at the apex. In some cases preparation of the canal orifice with a long shank round burr was necessary to gain access. In seven teeth, no access to the apex was possible and these teeth were eliminated. In the other 293 teeth, the MBR canal(s) was (were) enlarged up to size 15 file. If another canal opening was found at the apex a 08 file was inserted into the second opening and passed coronally. Postoperative radiographs with file(s) in place were taken from the two directions, as before. Of the 293 teeth, 123 (42.0%) were Type II, 89 (30.4%) showed Type III systems and 10 (3.4%) were Type IV. Suggestions for identification and treatment of the second canal in the MBR are presented. The proportion of cases with two canals in the mesiobuccal root of maxillary first molars from Japanese patients was high and similar to that described from studies of other ethnic populations.