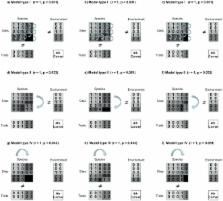 Although trait analyses have become more important in community ecology, trait-environment correlations have rarely been studied along successional gradients. We asked which environmental variables had the strongest impact on intraspecific and interspecific trait variation in the community and which traits were most responsive to the environment. We established a series of plots in a secondary forest in the Chinese subtropics, stratified by successional stages that were defined by the time elapsed since the last logging activities. On a total of 27 plots all woody plants were recorded and a set of individuals of every species was analysed for leaf traits, resulting in a trait matrix of 26 leaf traits for 122 species. A Fourth Corner Analysis revealed that the mean values of many leaf traits were tightly related to the successional gradient. Most shifts in traits followed the leaf economics spectrum with decreasing specific leaf area and leaf nutrient contents with successional time. Beside succession, few additional environmental variables resulted in significant trait relationships, such as soil moisture and soil C and N content as well as topographical variables. Not all traits were related to the leaf economics spectrum, and thus, to the successional gradient, such as stomata size and density. By comparing different permutation models in the Fourth Corner Analysis, we found that the trait-environment link was based more on the association of species with the environment than of the communities with species traits. The strong species-environment association was brought about by a clear gradient in species composition along the succession series, while communities were not well differentiated in mean trait composition. In contrast, intraspecific trait variation did not show close environmental relationships. The study confirmed the role of environmental trait filtering in subtropical forests, with traits associated with the leaf economics spectrum being the most responsive ones.

Brian Enquist,  Mark Westoby,  Evan Weiher … (2006)
There is considerable debate about whether community ecology will ever produce general principles. We suggest here that this can be achieved but that community ecology has lost its way by focusing on pairwise species interactions independent of the environment. We assert that community ecology should return to an emphasis on four themes that are tied together by a two-step process: how the fundamental niche is governed by functional traits within the context of abiotic environmental gradients; and how the interaction between traits and fundamental niches maps onto the realized niche in the context of a biotic interaction milieu. We suggest this approach can create a more quantitative and predictive science that can more readily address issues of global change.

Renato Valencia,  Nathan J. B. Kraft,  David Ackerly (2008)
It is debated whether species-level differences in ecological strategy, which play a key role in much of coexistence theory, are important in structuring highly diverse communities. We examined the co-occurrence patterns of over 1100 tree species in a 25-hectare Amazonian forest plot in relation to field-measured functional traits. Using a null model approach, we show that co-occurring trees are often less ecologically similar than a niche-free (neutral) model predicts. Furthermore, we find evidence for processes that simultaneously drive convergence and divergence in key aspects of plant strategy, suggesting that at least two distinct niche-based processes are occurring. Our results show that strategy differentiation among species contributes to the maintenance of diversity in one of the most diverse tropical forests in the world.

Functional traits and the growth-mortality trade-off in tropical trees.

James Dalling,  S. Wright,  K Harms … (2010)
A trade-off between growth and mortality rates characterizes tree species in closed canopy forests. This trade-off is maintained by inherent differences among species and spatial variation in light availability caused by canopy-opening disturbances. We evaluated conditions under which the trade-off is expressed and relationships with four key functional traits for 103 tree species from Barro Colorado Island, Panama. The trade-off is strongest for saplings for growth rates of the fastest growing individuals and mortality rates of the slowest growing individuals (r2 = 0.69), intermediate for saplings for average growth rates and overall mortality rates (r2 = 0.46), and much weaker for large trees (r2 80% of the explained variation and, after WD was included, LMA and H(max) made insignificant contributions. Virtually the full range of values of SM, LMA, and H(max) occurred at all positions on the growth-mortality trade-off. Although WD provides a promising start, a successful trait-based ecology of tropical forest trees will require consideration of additional traits.

Publisher ID: PONE-D-11-19966
DOI: 10.1371/journal.pone.0035742
PMC ID: 3335070
PubMed ID: 22539999
Copyright statement: Kröber et al. This is an open-access article distributed under the terms of the Creative Commons Attribution License, which permits unrestricted use, distribution, and reproduction in any medium, provided the original author and source are credited.