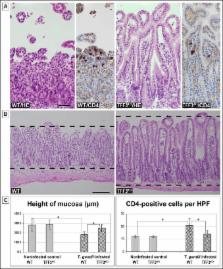 The peptide trefoil factor family 3 (TFF3) is a major constituent of the intestinal mucus, playing an important role in the repair of epithelial surfaces. To further understand the role of TFF3 in the protection of intestinal epithelium, we tested the influence of TFF3 in a murine Toxoplasma gondii-induced ileitis model. Surprisingly, TFF3 KO mice showed a reduced immune response in the ileum when compared to wild-type animals. Interleukin-12 and interferon-γ expression levels as well as the number of CD4 + lymphocytes were reduced in the infected TFF3 KO mice. These effects were in line with the trend of elevated parasite levels in the ileum. Moreover, TFF1 expression was upregulated in the spleen of infected mice. These initial results indicate that TFF3 is involved in the immune pathology of T. gondii infection-induced intestinal inflammation. Thus far, the mechanisms of how TFF3 influences the immune response are not fully understood. Further studies should identify if TFF3 affects mucus sensing of dendritic cells and how TFF3 is involved in regulating the immune response as an intrinsic secretory peptide of immune cells.

Montserrat Cols,  Anna Bigas,  Maurizio Gentile … (2013)
A dense mucus layer in the large intestine prevents inflammation by shielding the underlying epithelium from luminal bacteria and food antigens. This mucus barrier is organized around the hyperglycosylated mucin MUC2. Here we show that the small intestine has a porous mucus layer, which permitted the uptake of MUC2 by antigen-sampling dendritic cells (DCs). Glycans associated with MUC2 imprinted DCs with anti-inflammatory properties by assembling a galectin-3-Dectin-1-FcγRIIB receptor complex that activated β-catenin. This transcription factor interfered with DC expression of inflammatory but not tolerogenic cytokines by inhibiting gene transcription through nuclear factor κB. MUC2 induced additional conditioning signals in intestinal epithelial cells. Thus, mucus does not merely form a nonspecific physical barrier, but also constrains the immunogenicity of gut antigens by delivering tolerogenic signals.

Gr1(+) inflammatory monocytes are required for mucosal resistance to the pathogen Toxoplasma gondii.

L. Sibley,  Renato A DaMatta,  Marco Colonna … (2008)
The enteric pathogen Toxoplasma gondii is controlled by a vigorous innate T helper 1 (Th1) cell response in the murine model. We demonstrated that after oral infection, the parasite rapidly recruited inflammatory monocytes [Gr1(+) (Ly6C(+), Ly6G(-)) F4/80(+)CD11b(+)CD11c(-)], which established a vital defensive perimeter within the villi of the ileum in the small intestine. Mice deficient of the chemokine receptor CCR2 or the ligand CCL2 failed to recruit Gr1(+) inflammatory monocytes, whereas dendritic cells and resident tissue macrophages remained unaltered. The selective lack of Gr1(+) inflammatory monocytes resulted in an inability of mice to control replication of the parasite, high influx of neutrophils, extensive intestinal necrosis, and rapid death. Adoptive transfer of sorted Gr1(+) inflammatory monocytes demonstrated their ability to home to the ileum in infected animals and protect Ccr2(-/-) mice, which were otherwise highly susceptible to oral toxoplasmosis. Collectively, these findings illustrate the critical importance of inflammatory monocytes as a first line of defense in controlling intestinal pathogens.