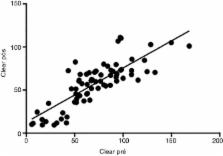 New surgical techniques for nephrectomy mainly related to early diagnosis made possible by advances in imaging studies have been developed in recent decades. However, postoperative renal dysfunction is a constant concern because of the major problems faced by healthcare services and by the patients themselves. To assess risk factors for developing acute renal failure (ARF) in patients submitted to nephrectomy in a university hospital.

Of the 77 patients, 72 met the inclusion criteria. Of these, ten (13.8%) had a diagnosis of chronic renal failure (CRF), 30 (48%) had stage I ARF and one (16.1%) had stage II ARF. The anesthesia time, type of surgery (open or laparoscopy), total or partial nephrectomy, the side of the procedure, hypertension, diabetes, CRF, renal cancer, preoperative and postoperative creatinine concentrations were analyzed. Only the difference between preoperative and postoperative creatinine clearance was clinically significant (P<0.001).

An altered preoperative renal function is a risk factor for the development of ARF in nephrectomized patients.

Surgical management of renal tumors 4 cm. or less in a contemporary cohort.

J. Lee,  J J KATZ,  W Shi … (2000)
We evaluated a patient cohort with renal tumors 4 cm. or less treated with partial or radical nephrectomy. We compared patient and tumor characteristics, and survival in these 2 groups. We retrospectively analyzed the records of 670 patients with a median age of 63 years treated surgically for renal cell carcinoma between July 31, 1989 and July 31, 1997. Renal tumors 4.0 cm. or less were noted in 252 patients (38%) who underwent a total of 262 procedures, including 183 radical (70%) and 79 partial (30%) nephrectomies. Ten patients required 2 operations each because of bilateral renal cell carcinoma. Median followup was 40 months. We compared clinicopathological parameters in the partial and radical nephrectomy groups using chi-square or Wilcoxon analysis as appropriate. Survival analysis was determined by the log rank test and Cox regression model. The partial and radical nephrectomy groups were comparable with respect to gender ratio, tumor presentation, histological classification, pathological stage and complication rate. Median tumor size was 2.5 and 3.0 cm. in the partial and radical nephrectomy groups, respectively (p = 0.0001). Resection was incomplete in 1 patient (1.3%) in the partial and none in the radical nephrectomy group. There was no local recurrence after either procedure, and no significant difference in disease specific, disease-free and overall survival (p = 0.98, 0.23 and 0.20, respectively). Patients with a small renal tumor have similar perioperative morbidity, pathological stage and outcome regardless of treatment with partial or radical nephrectomy. Therefore, partial nephrectomy remains a safe alternative for tumors of this size.

Nephrectomy induced chronic renal insufficiency is associated with increased risk of cardiovascular death and death from any cause in patients with localized cT1b renal masses.

R Thompson,  Brian Lane,  Christine M. Lohse … (2012)
To evaluate the effects of warm ischemia time (WIT) and quantity and quality of kidney preserved on renal functional recovery after partial nephrectomy (PN). The effect of WIT relative to these other parameters has recently been challenged. We identified 362 consecutive patients with a solitary kidney who had undergone PN using warm ischemia. Multivariate models with multiple imputations were used to evaluate the associations with acute renal failure and new-onset stage IV chronic kidney disease (CKD). The median WIT was 21 minutes (range 4-55), the median percentage of kidney preserved was 80% (range 25%-98%), and the median preoperative glomerular filtration rate (GFR) was 61 mL/min/1.73 m2 (range 11-133). Postoperative acute renal failure occurred in 70 patients (19%). Of the 226 patients with a preoperative GFR>30 mL/min/1.73 m2, 38 (17%) developed new-onset stage IV CKD during follow-up. On multivariate analysis, the WIT (P=.021), percentage of kidney preserved (P=.009), and preoperative GFR (P 25 minutes remained significantly associated with new-onset stage IV CKD in a multivariate analysis adjusting for the quantity and quality factors (hazard ratio 2.27, P=.049). Our results have validated that the quality and quantity of kidney are the most important determinants of renal function after PN. In addition, we have also demonstrated that the WIT remains an important modifiable feature associated with short- and long-term renal function. The precision of surgery, maximizing the amount of preserved, vascularized parenchyma, should be a focus of study for optimizing the PN procedure. Copyright © 2012 Elsevier Inc. All rights reserved.