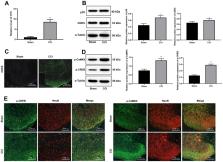 The NP rat model was established using chronic constriction injury (CCI). Paw withdrawal threshold (PWT) tests and paw withdrawal latency (PWL) tests were performed. Then, small interfering (si)RNA against H19 was intrathecally injected into rats to suppress H19 expression. Schwann cells were isolated from NP rats and transfected with siRNA-H19 or a lentivirus (LV)-based vector expressing H19. Inflammatory factors and glial fibrillary acidic protein (GFAP) were detected. Western blot analysis was conducted to detect CDK5/p35 and p-CREB expression. Finally, H19, CDK5 and CREB phosphorylation were tested with the combination of the CDK5 inhibitor roscovitine and transfection of LV-H19 and siRNA-H19. Finally, we investigated the binding relationships between H19 and miR-196a-5p and between miR-196a-5p and CDK5 and detected the mRNA expression of miR-196a-5p and CDK5 in rats with H19 knockdown and in Schwann cells with H19 knockdown.

Highly expressed H19, CDK5/p-35 and p-CREB were observed in NP rats, accompanied by obviously decreased PWT and PWL, upregulated inflammatory factors and GFAP levels, and reduced 5-HT 2A and GABA B2 expression. siRNA-H19 restored NP-related indexes and downregulated CDK5/p35 and p-CREB phosphorylation. siRNA-H19, together with the CDK5 inhibitor roscovitine, reduced CDK5 and p-CREB expression in Schwann cells isolated from NP rats. Binding sites between H19 and miR-196a-5p and between miR-196a-5p and CDK5 were identified. Silencing H19 upregulated miR-196a-5p expression and downregulated CDK5 levels.

Our study demonstrated that silencing H19 inhibited NP by suppressing CDK5/p35 and p-CREB phosphorylation via the miR-196a-5p/CDK5 axis, which may provide new insight into NP treatment.

Doron Betel,  Anjali Koppal,  Phaedra Agius … (2010)
mirSVR is a new machine learning method for ranking microRNA target sites by a down-regulation score. The algorithm trains a regression model on sequence and contextual features extracted from miRanda-predicted target sites. In a large-scale evaluation, miRanda-mirSVR is competitive with other target prediction methods in identifying target genes and predicting the extent of their downregulation at the mRNA or protein levels. Importantly, the method identifies a significant number of experimentally determined non-canonical and non-conserved sites.

Eli Raveh,  Imad Matouk,  Michal Gilon … (2015)
The imprinted oncofetal long non-coding RNA (lncRNA) H19 is expressed in the embryo, down-regulated at birth and then reappears in tumors. Its role in tumor initiation and progression has long been a subject of controversy, although accumulating data suggest that H19 is one of the major genes in cancer. It is actively involved in all stages of tumorigenesis and is expressed in almost every human cancer. In this review we delineate the various functions of H19 during the different stages in the complex process of tumor progression. H19 up-regulation allows cells to enter a “selfish” survival mode in response to stress conditions, such as destabilization of the genome and hypoxia, by accelerating their proliferation rate and increasing overall cellular resistance to stress. This response is tightly correlated with nullification, dysfunction or significant down-regulation of the master tumor suppressor gene P53. The growing evidence of H19’s involvement in both proliferation and differentiation processes, together with its involvement in epithelial to mesenchymal transition (EMT) and also mesenchymal to epithelial transition (MET), has led us to conclude that some of the recent disputes and discrepancies arising from current research findings can be resolved from a viewpoint supporting the oncogenic properties of H19. According to a holistic approach, the versatile, seemingly contradictory functions of H19 are essential to, and differentially harnessed by, the tumor cell depending on its context within the process of tumor progression.

Ian Gilron,  Ralf Baron,  Troels Jensen (2015)
Neuropathic pain is caused by disease or injury of the nervous system and includes various chronic conditions that, together, affect up to 8% of the population. A substantial body of neuropathic pain research points to several important contributory mechanisms including aberrant ectopic activity in nociceptive nerves, peripheral and central sensitization, impaired inhibitory modulation, and pathological activation of microglia. Clinical evaluation of neuropathic pain requires a thorough history and physical examination to identify characteristic signs and symptoms. In many cases, other laboratory investigations and clinical neurophysiological testing may help identify the underlying etiology and guide treatment selection. Available treatments essentially provide only symptomatic relief and may include nonpharmacological, pharmacological, and interventional therapies. Most extensive evidence is available for pharmacological treatment, and currently recommended first-line treatments include antidepressants (tricyclic agents and serotonin-norepinephrine reuptake inhibitors) and anticonvulsants (gabapentin and pregabalin). Individualized multidisciplinary patient care is facilitated by careful consideration of pain-related disability (eg, depression and occupational dysfunction) as well as patient education; repeat follow-up and strategic referral to appropriate medical/surgical subspecialties; and physical and psychological therapies. In the near future, continued preclinical and clinical research and development are expected to lead to further advancements in the diagnosis and treatment of neuropathic pain.