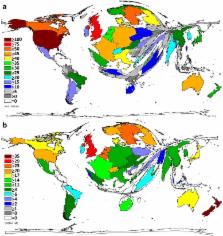 Gestational diabetes mellitus (GDM) is associated with substantial morbidity for mothers and their offspring. While clinical and basic research activities on this important disease grow constantly, there is no concise analysis of global architecture of GDM research. Hence, it was the objective of this study to assess the global scientific performance chronologically, geographically and in relation to existing research networks and gender distribution of publishing authors.

On the basis of the New Quality and Quantity Indices in Science (NewQIS) platform, scientometric methods were combined with modern visualizing techniques such as density equalizing mapping, and the Web of Science database was used to assess GDM-related entries from 1900 to 2012.

Twelve thousand five hundred four GDM-related publications were identified and analyzed. The USA (4295 publications) and the UK (1354 publications) dominated the field concerning research activity, overall citations and country-specific Hirsch-Index, which quantified the impact of a country’s published research on the scientific community. Semi-qualitative indices such as country-specific citation rates ranked New Zealand and the UK at top positions. Annual collaborative publications increased steeply between the years 1990 and 2012 (71 to 1157 respectively). Subject category analysis pointed to a minor interest of public health issues in GDM research. Gender analysis in terms of publication authorship revealed a clear dominance of the male gender until 2005; then a trend towards gender equity started and the activity of female scientists grew visibly in many countries. The country-specific gender analysis revealed large differences, i.e. female scientists dominated the scientific output in the USA, whereas the majority of research was published by male authors in countries such as Japan.

This study provides the first global sketch of GDM research architecture. While North-American and Western-European countries were dominating the GDM-related scientific landscape, a disparity exists in terms of research output between developed and low-resource countries. Since GDM is linked to considerable mortality and morbidity of mothers and their offspring and constitutes a tremendous burden for the healthcare systems in underserved countries, our findings emphasize the need to address disparities by fostering research endeavors, public health programs and collaborative efforts in these nations.

Leanne Bellamy,  Juan-Pablo Casas,  Aroon D Hingorani … (2009)
Women with gestational diabetes are at increased risk of developing type 2 diabetes, but the risk and time of onset have not been fully quantified. We therefore did a comprehensive systematic review and meta-analysis to assess the strength of association between these conditions and the effect of factors that might modify the risk. We identified cohort studies in which women who had developed type 2 diabetes after gestational diabetes were followed up between Jan 1, 1960, and Jan 31, 2009, from Embase and Medline. 205 relevant reports were hand searched. We selected 20 studies that included 675 455 women and 10 859 type 2 diabetic events. We calculated and pooled unadjusted relative risks (RRs) with 95% CIs for each study using a random-effects model. Subgroups analysed were the number of cases of type 2 diabetes, ethnic origin, duration of follow-up, maternal age, body-mass index, and diagnostic criteria. Women with gestational diabetes had an increased risk of developing type 2 diabetes compared with those who had a normoglycaemic pregnancy (RR 7.43, 95% CI 4.79-11.51). Although the largest study (659 164 women; 9502 cases of type 2 diabetes) had the largest RR (12.6, 95% CI 12.15-13.19), RRs were generally consistent among the subgroups assessed. Increased awareness of the magnitude and timing of the risk of type 2 diabetes after gestational diabetes among patients and clinicians could provide an opportunity to test and use dietary, lifestyle, and pharmacological interventions that might prevent or delay the onset of type 2 diabetes in affected women. None.

G Antes,  M. Schneider,  T Zellweger … (1997)
Some randomised controlled trials (RCTs) done in German-speaking Europe are published in international English-language journals and others in national German-language journals. We assessed whether authors are more likely to report trials with statistically significant results in English than in German. We studied pairs of RCT reports, matched for first author and time of publication, with one report published in German and the other in English. Pairs were identified from reports round in a manual search of five leading German-language journals and from reports published by the same authors in English found on Medline. Quality of methods and reporting were assessed with two different scales by two investigators who were unaware of authors' identities, affiliations, and other characteristics of trial reports. Main study endpoints were selected by two investigators who were unaware of trial results. Our main outcome was the number of pairs of studies in which the levels of significance (shown by p values) were discordant. 62 eligible pairs of reports were identified but 19 (31%) were excluded because they were duplicate publications. A further three pairs (5%) were excluded because no p values were given. The remaining 40 pairs were analysed. Design characteristics and quality features were similar for reports in both languages. Only 35% of German-language articles, compared with 62% of English-language articles, reported significant (p < 0.05) differences in the main endpoint between study and control groups (p = 0.002 by McNemar's test). Logistic regression showed that the only characteristic that predicted publication in an English-language journal was a significant result. The odds ratio for publication of trials with significant results in English was 3.75 (95% CI 1.25-11.3). Authors were more likely to publish RCTs in an English-language journal if the results were statistically significant. English language bias may, therefore, be introduced in reviews and meta-analyses if they include only trials reported in English. The effort of the Cochrane Collaboration to identify as many controlled trials as possible, through the manual search of many medical journals published in different languages will help to reduce such bias.