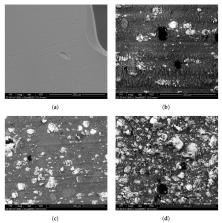 Composite lightweight materials for X-ray shielding applications were studied and developed with the goal of replacing traditional screens made of lead and steel, with innovative materials with similar shielding properties, but lighter, more easily formed and workable, with lower impact on the environment and reduced toxicity for human health. New epoxy based composites additivated with barium sulfate and bismuth oxide were designed through simulations performed with softwares based on Geant4. Then, they were prepared and characterized using different techniques starting from digital radiography in order to test the radiopacity of the composites, in comparison with traditional materials. The lower environmental impact and toxicity of these innovative screens were quantified by Life Cycle Assessment (LCA) calculation based on the ecoinvent database, within the openLCA framework. Optimized mixtures are (i) 20% epoxy/60% bismuth oxide/20% barite, which guarantees the best performance in X-ray shielding, largely overcoming steel, but higher in costs and a weight reduction of circa 60%; (ii) 20% epoxy/40% bismuth oxide/40% barite which has slightly lower performances in shielding, but it is lighter and cheaper than the first one and (iii) the 20% epoxy/20% bismuth oxide/60% barite which is the cheapest material, still maintaining the X-ray shielding of steel. Depending on cost/efficiency request of the specific application (industrial radiography, aerospace, medical analysis), the final user can choose among the proposed solutions.

Alan Coelho (2018)
TOPAS and its academic variant TOPAS-Academic are nonlinear least-squares optimization programs written in the C++ programming language. This paper describes their functionality and architecture. The latter is of benefit to developers seeking to reduce development time. TOPAS allows linear and nonlinear constraints through the use of computer algebra, with parameter dependencies, required for parameter derivatives, automatically determined. In addition, the objective function can include restraints and penalties, which again are defined using computer algebra. Of importance is a conjugate gradient solution routine with bounding constraints which guide refinements to convergence. Much of the functionality of TOPAS is achieved through the use of generic functionality; for example, flexible peak-shape generation allows neutron time-of-flight (TOF) peak shapes to be described using generic functions. The kernel of TOPAS can be run from the command line for batch mode operation or from a closely integrated graphical user interface. The functionality of TOPAS includes peak fitting, Pawley and Le Bail refinement, Rietveld refinement, single-crystal refinement, pair distribution function refinement, magnetic structures, constant wavelength neutron refinement, TOF refinement, stacking-fault analysis, Laue refinement, indexing, charge flipping, and structure solution through simulated annealing.

J P McCaffrey,  H-h Shen,  B Downton … (2007)
The attenuating properties of several types of lead (Pb)-based and non-Pb radiation shielding materials were studied and a correlation was made of radiation attenuation, materials properties, calculated spectra and ambient dose equivalent. Utilizing the well-characterized x-ray and gamma ray beams at the National Research Council of Canada, air kerma measurements were used to compare a variety of commercial and pre-commercial radiation shielding materials over mean energy ranges from 39 to 205 keV. The EGSnrc Monte Carlo user code cavity. cpp was extended to provide computed spectra for a variety of elements that have been used as a replacement for Pb in radiation shielding garments. Computed air kerma values were compared with experimental values and with the SRS-30 catalogue of diagnostic spectra available through the Institute of Physics and Engineering in Medicine Report 78. In addition to garment materials, measurements also included pure Pb sheets, allowing direct comparisons to the common industry standards of 0.25 and 0.5 mm "lead equivalent." The parameter "lead equivalent" is misleading, since photon attenuation properties for all materials (including Pb) vary significantly over the energy spectrum, with the largest variations occurring in the diagnostic imaging range. Furthermore, air kerma measurements are typically made to determine attenuation properties without reference to the measures of biological damage such as ambient dose equivalent, which also vary significantly with air kerma over the diagnostic imaging energy range. A single material or combination cannot provide optimum shielding for all energy ranges. However, appropriate choice of materials for a particular energy range can offer significantly improved shielding per unit mass over traditional Pb-based materials.