Glycosylation of 3-Hydroxyflavone, 3-Methoxyflavone, Quercetin and Baicalein in Fungal Cultures of the Genus Isaria 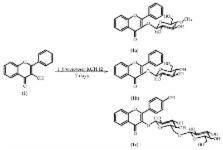 Flavonoids are plant secondary metabolites with a broad spectrum of biological activities. In nature, they occur mainly in the form of glycosides, but their extraction is often difficult and expensive, as is chemical synthesis. We have shown that biotransformations are an excellent method for obtaining flavonoid glycosides. We are the first team to describe the use of Isaria microorganisms in biotransformations of flavonoid compounds. In the present study as biocatalysts, we used one strain of Isaria fumosorosea KCH J2 isolated from a spider carcass in green areas of Wroclaw and two strains of I. farinosa (J1.4 and J1.6) isolated from insects found in already unused mines in Lower Silesia. The substrates were 3-hydroxyflavone, 3-methoxyflavone, quercetin (3,3′,4′,5,7-pentahydroxyflavone), and baicalein (5,6,7-trihydroxyflavone). For all the substrates that were used in this study, we obtained 4- O-methylglucopyranosides. In the case of substrates with a hydroxyl group in the third position, O- β- d-glucopyranosides were also formed. Isoquercetin that was obtained by biotransformation was used as a substrate to check the kinetics of the formation of flavonoid 4- O-methylglucopyranosides in I. fumosorosea KCH J2 culture. We did not observe the attachment of the methyl group to glucose unit in isoquercetin. Our finding suggest that the attachment of 4- O-methylglucopyranose occurs in one step.

Martin Schmidt,  Vanessa Yardley,  T Rüedi … (2006)
Trypanosomiasis and leishmaniasis are important parasitic diseases affecting millions of people in Africa, Asia, and South America. In a previous study, we identified several flavonoid glycosides as antiprotozoal principles from a Turkish plant. Here we surveyed a large set of flavonoid aglycones and glycosides, as well as a panel of other related compounds of phenolic and phenylpropanoid nature, for their in vitro activities against Trypanosoma brucei rhodesiense, Trypanosoma cruzi, and Leishmania donovani. The cytotoxicities of more than 100 compounds for mammalian L6 cells were also assessed and compared to their antiparasitic activities. Several compounds were investigated in vivo for their antileishmanial and antitrypanosomal efficacies in mouse models. Overall, the best in vitro trypanocidal activity for T. brucei rhodesiense was exerted by 7,8-dihydroxyflavone (50% inhibitory concentration [IC50], 68 ng/ml), followed by 3-hydroxyflavone, rhamnetin, and 7,8,3',4'-tetrahydroxyflavone (IC50s, 0.5 microg/ml) and catechol (IC50, 0.8 microg/ml). The activity against T. cruzi was moderate, and only chrysin dimethylether and 3-hydroxydaidzein had IC50s less than 5.0 microg/ml. The majority of the metabolites tested possessed remarkable leishmanicidal potential. Fisetin, 3-hydroxyflavone, luteolin, and quercetin were the most potent, giving IC50s of 0.6, 0.7, 0.8, and 1.0 microg/ml, respectively. 7,8-Dihydroxyflavone and quercetin appeared to ameliorate parasitic infections in mouse models. Generally, the test compounds lacked cytotoxicity in vitro and in vivo. By screening a large number of flavonoids and analogues, we were able to establish some general trends with respect to the structure-activity relationship, but it was not possible to draw clear and detailed quantitative structure-activity relationships for any of the bioactivities by two different approaches. However, our results can help in directing the rational design of 7,8-dihydroxyflavone and quercetin derivatives as potent and effective antiprotozoal agents.

Life or death: neuroprotective and anticancer effects of quercetin.

Federico Dajas (2012)
Quercetin is a ubiquitous flavonoid that is present in numerous plants that are utilized in many different cultures for their nervous system and anticancer effects. To better understand the neuroprotective and antiproliferative activities of quercetin, we present a comprehensive review of the divergent actions that contribute to the ethnopharmacological profile of these plants. The pharmacological activities of quercetin that modulate antioxidation/oxidation/kinase-signaling pathways might be differentially elicited in neurons compared with malignant cells, ultimately promoting cell survival or death in a cell type- and metabolism-specific manner. Whereas the broad antioxidation and anti-inflammatory activities of quercetin are important for neuronal survival, the oxidative, kinase- and cell cycle-inhibitory, apoptosis-inducing effects of quercetin are essential for its anticancer effects. The diverse mechanistic interactions and activities of quercetin that modulate the phosphorylation state of molecules as well as gene expression would alter the interconnected and concerted intracellular signaling equilibrium, either inhibiting or strengthening survival signals. These mechanisms, which have been mainly observed in in vitro studies, cannot be easily translated into an explanation of the divergent simultaneous neuroprotective and anticancer effects observed in vivo. This is in part due to low bioavailability in plasma and in the brain, as well as the nature of the actual active molecules. Numerous studies have demonstrated the beneficial effects of chronic quercetin intake, which is ethnopharmacologically meaningful, as many plants that are chronically ingested by people contain quercetin. Although quercetin and quercetin-containing plants exhibit potential as therapeutic modalities in neuropathology and in cancer, the data collectively highlight the need to elucidate issues such as bioavailability as well as its correlation with effectiveness at biomarkers in vivo. There would be an increased potentential of these plants for chemoprevention and neuropathology prevention. Copyright © 2012 Elsevier Ireland Ltd. All rights reserved.