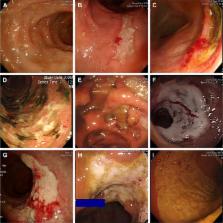 Sixty-nine patients were enrolled, and 8 IBD patients were excluded. Within the 61 non-IBD patients, 31 were diagnosed by colonoscopy and others by sigmoidoscopy. Ulceration (77%) was the most common endoscopic finding, followed by a cobblestone appearance (19.7%), colitis with/without erosions (9.8%), pseudomembrane (9.8%), and tumor/polyp-like lesions (8.2%). Among the patients who underwent full-length colonoscopy, 35.3% presented with right-sided colitis, 23.5% with left-sided colitis, and 32.4% with pancolitis. Pancolitis was identified as a negative predictor of inhospital mortality (odds ratio, 6.8; 95% confidence interval, 1.233–37.497; p=0.028) and overall survival (log rank p=0.018).

Meta-analysis of outcome of cytomegalovirus colitis in immunocompetent hosts.

E Lamoureux,  Ian Shrier,  Polymnia Galiatsatos … (2005)
There are only a few anecdotal reports of cytomegalovirus (CMV) colitis in immunocompetent hosts. The impact of the disease in this patient population remains poorly understood. The aim of this study was to perform a meta-analysis using individual patient data to determine outcomes of CMV colitis in immunocompetent patients and identify risk factors that might influence prognosis. A literature search was performed from 1980 to 2003 looking for immunocompetent patients with CMV colitis. Immunocompetence was defined as absence of congenital or acquired immune deficiency, transplant, or immunosuppressive medication. Patients were divided by age ( or =55) and grouped according to coexisting illnesses. Kaplan-Meier curves were plotted to assess survival. Variables included age, sex, site of acquisition of infection, extent of disease, coexisting illnesses, and treatment modality. A total of 44 patients were identified, with an average age of 61.1. Only 10 were free of any comorbidity. The mean follow-up was 13.4 months. Spontaneous remission occurred in 31.8%, mostly individuals 55. There was a higher mortality rate among male patients > or =55 (56.9%; P = 0.08), patients with immune-modulating diseases (75.2%; P = 0.10), and those having a colectomy (68.9%; P = 0.09). This analysis underlines the rarity of CMV colitis in patients with an intact immune system. Advanced age, male gender, presence of immune-modulating comorbidities, and need for surgical intervention are factors negatively influencing survival. Conversely, young healthy patients have a good prognosis with no intervention.

The prevalence and efficacy of ganciclovir on steroid-refractory ulcerative colitis with cytomegalovirus infection: a prospective multicenter study.