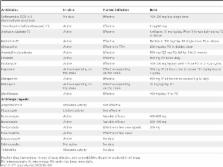 Medical treatment of mycetoma depends on its fungal or bacterial etiology. Clinically, these entities share similar features that can confuse diagnosis, causing a lack of therapeutic response due to inappropriate treatment. This review evaluates the response to available antimicrobial agents in actinomycetoma and the current status of antifungal drugs for treatment of eumycetoma.

Clinical and laboratory features of the Nocardia spp. based on current molecular taxonomy.

R. M. Brown,  Patricia S Conville,  R. Wallace … (2006)
The recent explosion of newly described species of Nocardia results from the impact in the last decade of newer molecular technology, including PCR restriction enzyme analysis and 16S rRNA sequencing. These molecular techniques have revolutionized the identification of the nocardiae by providing rapid and accurate identification of recognized nocardiae and, at the same time, revealing new species and a number of yet-to-be-described species. There are currently more than 30 species of nocardiae of human clinical significance, with the majority of isolates being N. nova complex, N. abscessus, N. transvalensis complex, N. farcinica, N. asteroides type VI (N. cyriacigeorgica), and N. brasiliensis. These species cause a wide variety of diseases and have variable drug susceptibilities. Accurate identification often requires referral to a reference laboratory with molecular capabilities, as many newer species are genetically distinct from established species yet have few or no distinguishing phenotypic characteristics. Correct identification is important in deciding the clinical relevance of a species and in the clinical management and treatment of patients with nocardial disease. This review characterizes the currently known pathogenic species of Nocardia, including clinical disease, drug susceptibility, and methods of identification.

Treatment of scedosporiosis with voriconazole: clinical experience with 107 patients.

H. Heath,  David Ellis,  Chen Chen … (2008)
The efficacy of voriconazole in 107 patients with scedosporiosis was analyzed. Principal infection sites were the lungs/sinuses (24%), central nervous system (CNS) (20%), and bone (18%), while 21% of patients had disseminated infection. Solid organ transplantation (22%), hematological malignancy (21%), and surgery/trauma (15%) were the predominant underlying conditions. A successful therapeutic response was achieved in 57% of patients (median, 103 therapy days), with > 98% of those responding receiving > or = 28 days of therapy. Patients receiving primary therapy showed a 61% response versus 56% for the others. The best therapeutic responses were seen for skin/subcutaneous (91%) or bone (79%) infections, and the lowest for CNS infections (43%). Patients without major immune suppression (72%) or those with solid organ transplantation (63%) or various hematological conditions (60%) showed the best responses by underlying condition. Median known survival time was 133 days (therapy successes, 252 days; failures, 21 days). In all, 43 (40%) patients died, 73% due to scedosporiosis. Patients with Scedosporium prolificans infection had significantly reduced survival times (P = 0.0259) and were more likely to die from fungal infection (P = 0.002) than were Scedosporium apiospermum-infected patients. In a subset of 43 patients where voriconazole baseline MICs were available, response to voriconazole was higher for S. apiospermum-infected patients (54% response; MIC(50), 0.25 microg/ml) than for S. prolificans-infected patients (40% response; MIC(50), 4.0 microg/ml). Voriconazole demonstrated clinically useful activity in the treatment of both S. apiospermum and S. prolificans infections and was well tolerated.

Emilio Pérez-Trallero,  P Idigoras,  Julián Larruskain … (2011)
This study determined the antimicrobial susceptibilities of 186 clinical isolates of Nocardia spp. isolated in Gipuzkoa, northern Spain, between 1998 and 2009. Most isolates were recovered from respiratory samples, Nocardia nova, N. farcinica, N. cyriacigeorgica, N. abscessus, and N. carnea being the species most frequently isolated. Linezolid and amikacin were the only two antimicrobials to which all isolates were susceptible. The majority of N. flavorosea, N. carnea, and N. farcinica isolates were trimethoprim-sulfamethoxazole resistant.

The authors declare that they received no source of funding for this work.