Global, regional and national consumption of major food groups in 1990 and 2010: a systematic analysis including 266 country-specific nutrition surveys worldwide 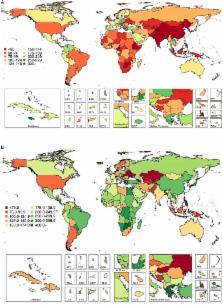 We searched and obtained individual-level intake data in 16 age/sex groups worldwide from 266 surveys across 113 countries. We combined these data with food balance sheets available in all nations and years. A hierarchical Bayesian model estimated mean food intake and associated uncertainty for each age-sex-country-year stratum, accounting for differences in intakes versus availability, survey methods and representativeness, and sampling and modelling uncertainty.

The Preventable Causes of Death in the United States: Comparative Risk Assessment of Dietary, Lifestyle, and Metabolic Risk Factors

Diet, nutrition and the prevention of chronic diseases.

listed No authors (2002)
Shifting dietary patterns, a decline in energy expenditure associated with a sedentary lifestyle, an ageing population--together with tobacco use and alcohol consumption--are major risk factors for noncommunicable diseases and pose an increasing challenge to public health. This report of a Joint WHO/FAO Expert Consultation reviews the evidence on the effects of diet and nutrition on chronic diseases and makes recommendations for public health policies and strategies that encompass societal, behavioural and ecological dimensions. Although the primary aim of the Consultation was to set targets related to diet and nutrition, the importance of physical activity was also emphasized. The Consultation considered diet in the context of the macro-economic implications of public health recommendations on agriculture and the global supply and demand for fresh and processed foodstuffs. In setting out ways to decrease the burden of chronic diseases such as obesity, type 2 diabetes, cardiovascular diseases (including hypertension and stroke), cancer, dental diseases and osteoporosis, this report proposes that nutrition should be placed at the forefront of public health policies and programmes. This report will be of interest to policy-makers and public health professionals alike, in a wide range of disciplines including nutrition, general medicine and gerontology. It shows how, at the population level, diet and exercise throughout the life course can reduce the threat of a global epidemic of chronic diseases.