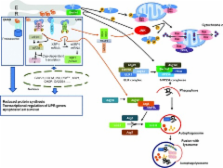 Journal: Annals of the New York Academy of Sciences

The endoplasmic reticulum (ER) is responsible for protein processing. In rapidly proliferating tumor cells, the ER tends to be overloaded with unfolded and misfolded proteins due to high metabolic demand. With the limited protein-folding capacity of the ER, tumor cells often suffer from more ER stress than do normal cells. Thus, cellular stress responses to cope with ER stress, such as the unfolded protein response (UPR) and autophagy, might be more activated in cancer cells than in normal cells. The complex signaling pathways from the UPR to autophagy provide promising druggable targets; a number of UPR/autophagy-targeted anticancer agents are currently in development in preclinical and clinical studies. In this short review we will discuss the potential anticancer efficacy of modulators of cellular stress responses, especially UPR and autophagy, on the basis of their signaling pathways. In addition, the current developmental status of the UPR/autophagy-targeted agents will be discussed.

Autophagy is activated for cell survival after endoplasmic reticulum stress.

Craig M. Ogata,  Soshi Kanemoto,  Manabu Taniguchi … (2006)
Eukaryotic cells deal with accumulation of unfolded proteins in the endoplasmic reticulum (ER) by the unfolded protein response, involving the induction of molecular chaperones, translational attenuation, and ER-associated degradation, to prevent cell death. Here, we found that the autophagy system is activated as a novel signaling pathway in response to ER stress. Treatment of SK-N-SH neuroblastoma cells with ER stressors markedly induced the formation of autophagosomes, which were recognized at the ultrastructural level. The formation of green fluorescent protein (GFP)-LC3-labeled structures (GFP-LC3 "dots"), representing autophagosomes, was extensively induced in cells exposed to ER stress with conversion from LC3-I to LC3-II. In IRE1-deficient cells or cells treated with c-Jun N-terminal kinase (JNK) inhibitor, the autophagy induced by ER stress was inhibited, indicating that the IRE1-JNK pathway is required for autophagy activation after ER stress. In contrast, PERK-deficient cells and ATF6 knockdown cells showed that autophagy was induced after ER stress in a manner similar to the wild-type cells. Disturbance of autophagy rendered cells vulnerable to ER stress, suggesting that autophagy plays important roles in cell survival after ER stress.

Jin Ye,  Robert Rawson,  Ryutaro Komuro … (2000)
ATF6 is a membrane-bound transcription factor that activates genes in the endoplasmic reticulum (ER) stress response. When unfolded proteins accumulate in the ER, ATF6 is cleaved to release its cytoplasmic domain, which enters the nucleus. Here, we show that ATF6 is processed by Site-1 protease (S1P) and Site-2 protease (S2P), the enzymes that process SREBPs in response to cholesterol deprivation. ATF6 processing was blocked completely in cells lacking S2P and partially in cells lacking S1P. ATF6 processing required the RxxL and asparagine/proline motifs, known requirements for S1P and S2P processing, respectively. Cells lacking S2P failed to induce GRP78, an ATF6 target, in response to ER stress. ATF6 processing did not require SCAP, which is essential for SREBP processing. We conclude that S1P and S2P are required for the ER stress response as well as for lipid synthesis.

Regulation of protein synthesis by hypoxia via activation of the endoplasmic reticulum kinase PERK and phosphorylation of the translation initiation factor eIF2alpha.

Re-use of this article is permitted in accordance with the Terms and Conditions set out at http://wileyonlinelibrary.com/onlineopen#OnlineOpen_Terms