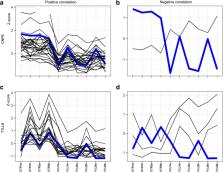 Androgens are involved in the regulation of ovarian development during fetal/neonatal life. Environmental chemicals displaying anti-androgenic activities may affect multiple signal transduction pathways by blocking endogenous androgen action. The aim of the current study was to examine effects of the anti-androgen flutamide on the expression of coding transcripts and long non-coding RNAs (lncRNAs) in neonatal porcine ovaries. By employing RNA-Seq technology we aimed to extend our understanding of the role of androgens in neonatal folliculogenesis and examine the impact of the anti-androgen flutamide on ovarian function.

Piglets were subcutaneously injected with flutamide (50 mg/kg BW) or corn oil (controls) between postnatal days 1 and 10 ( n = 3/group). Ovaries were excised from the 11-day-old piglets and total cellular RNAs were isolated and sequenced.

Our results suggest that neonatal exposure of pigs to flutamide alters the expression of genes involved in ovarian cell proliferation, ovarian steroidogenesis and oocyte fertilization, which in turn may affect female reproduction in adult life.

Phil G Knight, Claire Glister (2006)
In recent years, exciting progress has been made towards unravelling the complex intraovarian control mechanisms that, in concert with systemic signals, coordinate the recruitment, selection and growth of follicles from the primordial stage through to ovulation and corpus luteum formation. A plethora of growth factors, many belonging to the transforming growth factor-beta (TGF-beta ) superfamily, are expressed by ovarian somatic cells and oocytes in a developmental, stage-related manner and function as intraovarian regulators of folliculogenesis. Two such factors, bone morphogenetic proteins, BMP-4 and BMP-7, are expressed by ovarian stromal cells and/or theca cells and have recently been implicated as positive regulators of the primordial-to-primary follicle transition. In contrast, evidence indicates a negative role for anti-Mullerian hormone (AMH, also known as Mullerian-inhibiting substance) of pre-granulosa/granulosa cell origin in this key event and subsequent progression to the antral stage. Two other TGF-beta superfamily members, growth and differentiation factor-9 (GDF-9) and BMP-15 (also known as GDF-9B) are expressed in an oocyte-specific manner from a very early stage and play key roles in promoting follicle growth beyond the primary stage; mice with null mutations in the gdf-9 gene or ewes with inactivating mutations in gdf-9 or bmp-15 genes are infertile with follicle development arrested at the primary stage. Studies on later stages of follicle development indicate positive roles for granulosa cell-derived activin, BMP-2, -5 and -6, theca cell-derived BMP-2, -4 and -7 and oocyte-derived BMP-6 in promoting granulosa cell proliferation, follicle survival and prevention of premature luteinization and/or atresia. Concomitantly, activin, TGF-beta and several BMPs may exert paracrine actions on theca cells to attenuate LH-dependent androgen production in small to medium-size antral follicles. Dominant follicle selection in monovular species may depend on differential FSH sensitivity amongst a growing cohort of small antral follicles. Changes in intrafollicular activins, GDF-9, AMH and several BMPs may contribute to this selection process by modulating both FSH- and IGF-dependent signalling pathways in granulosa cells. Activin may also play a positive role in oocyte maturation and acquisition of developmental competence. In addition to its endocrine role to suppress FSH secretion, increased output of inhibin by the selected dominant follicle(s) may upregulate LH-induced androgen secretion that is required to sustain a high level of oestradiol secretion during the pre-ovulatory phase. Advances in our understanding of intraovarian regulatory mechanisms should facilitate the development of new approaches for monitoring and manipulating ovarian function and improving fertility in domesticated livestock, endangered species and man.

Analysis of the kinesin superfamily: insights into structure and function.

Harukata Miki, Yasushi Okada, Nobutaka Hirokawa (2005)
Kinesin superfamily proteins (KIFs) are key players or 'hub' proteins in the intracellular transport system, which is essential for cellular function and morphology. The KIF superfamily is also the first large protein family in mammals whose constituents have been completely identified and confirmed both in silico and in vivo. Numerous studies have revealed the structures and functions of individual family members; however, the relationships between members or a perspective of the whole superfamily structure until recently remained elusive. Here, we present a comprehensive summary based on a large, systematic phylogenetic analysis of the kinesin superfamily. All available sequences in public databases, including genomic information from all model organisms, were analyzed to yield the most complete phylogenetic kinesin tree thus far, comprising 14 families. This comprehensive classification builds on the recently proposed standardized nomenclature for kinesins and allows systematic analysis of the structural and functional relationships within the kinesin superfamily.