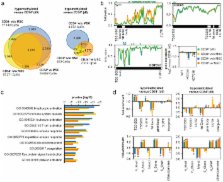 Hematopoietic stem and progenitor cells (HPCs) can be maintained in vitro, but the vast majority of their progeny loses stemness during culture. In this study, we compared DNA-methylation (DNAm) profiles of freshly isolated and culture-expanded HPCs. Culture conditions of CD34 + cells - either with or without mesenchymal stromal cells (MSCs) - had relatively little impact on DNAm, although proliferation is greatly increased by stromal support. However, all cultured HPCs - even those which remained CD34 + - acquired significant DNA-hypermethylation. DNA-hypermethylation occurred particularly in up-stream promoter regions, shore-regions of CpG islands, binding sites for PU.1, HOXA5 and RUNX1, and it was reflected in differential gene expression and variant transcripts of DNMT3A. Low concentrations of DNAm inhibitors slightly increased the frequency of colony-forming unit initiating cells. Our results demonstrate that HPCs acquire DNA-hypermethylation at specific sites in the genome which is relevant for the rapid loss of stemness during in vitro manipulation.

L Aravind,  Suneet Agarwal,  Richard Pastor … (2009)
DNA cytosine methylation is crucial for retrotransposon silencing and mammalian development. In a computational search for enzymes that could modify 5-methylcytosine (5mC), we identified TET proteins as mammalian homologs of the trypanosome proteins JBP1 and JBP2, which have been proposed to oxidize the 5-methyl group of thymine. We show here that TET1, a fusion partner of the MLL gene in acute myeloid leukemia, is a 2-oxoglutarate (2OG)- and Fe(II)-dependent enzyme that catalyzes conversion of 5mC to 5-hydroxymethylcytosine (hmC) in cultured cells and in vitro. hmC is present in the genome of mouse embryonic stem cells, and hmC levels decrease upon RNA interference-mediated depletion of TET1. Thus, TET proteins have potential roles in epigenetic regulation through modification of 5mC to hmC.

Rafael A. Irizarry,  Christine Ladd-Acosta,  Bo Wen … (2009)
Alterations in DNA methylation (DNAm) in cancer have been known for 25 years, including hypomethylation of oncogenes and hypermethylation of tumor suppressor genes1. However, most studies of cancer methylation have assumed that functionally important DNAm will occur in promoters, and that most DNAm changes in cancer occur in CpG islands2,3. Here we show that most methylation alterations in colon cancer occur not in promoters, and also not in CpG islands but in sequences up to 2 kb distant which we term “CpG island shores.” CpG island shore methylation was strongly related to gene expression, and it was highly conserved in mouse, discriminating tissue types regardless of species of origin. There was a surprising overlap (45-65%) of the location of colon cancer-related methylation changes with those that distinguished normal tissues, with hypermethylation enriched closer to the associated CpG islands, and hypomethylation enriched further from the associated CpG island and resembling non-colon normal tissues. Thus, methylation changes in cancer are at sites that vary normally in tissue differentiation, and they are consistent with the epigenetic progenitor model of cancer4, that epigenetic alterations affecting tissue-specific differentiation are the predominant mechanism by which epigenetic changes cause cancer.

This work is licensed under a Creative Commons Attribution 3.0 Unported License. To view a copy of this license, visit http://creativecommons.org/licenses/by/3.0/