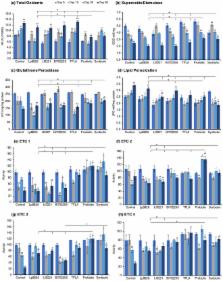 Aging and chronic disease development are multifactorial processes involving the cumulative effects of metabolic distress, inflammation, oxidative stress and mitochondrial dynamics. Recently, variations in the gut microbiota have been associated with age-related phenotypes and probiotics have shown promise in managing chronic disease progression. In this study, novel probiotic and synbiotic formulations are shown to combinatorially extend longevity in male Drosophila melanogaster through mechanisms of gut-brain-axis communication with implications in chronic disease management. Both the probiotic and synbiotic formulations rescued markers of metabolic stress by managing insulin resistance and energy regulatory pathways. Both formulations also ameliorated elevations in inflammation, oxidative stress and the loss of mitochondrial complex integrity. In almost all the measured pathways, the synbiotic formulation has a more robust impact than its individual components insinuating its combinatorial effect. The concomitant action of the gut microbiota on each of the key risk factors of aging and makes it a powerful therapeutic tool against neurodegeneration, diabetes, obesity, cardiovascular disease and other age-related chronic diseases.

David Harrison,  Randy Strong,  Zelton Sharp … (2009)
Inhibition of the TOR signalling pathway by genetic or pharmacological intervention extends lifespan in invertebrates, including yeast, nematodes and fruit flies1–5. However, whether inhibition of mTOR signalling can extend life in a mammalian species was unknown. We report here that rapamycin, an inhibitor of the mTOR pathway, extends median and maximal lifespan of both male and female mice when fed beginning at 600 days of age. Based on age at 90% mortality, rapamycin led to an increase of 14% for females and 9% for males. The effect was seen at three independent test sites in genetically heterogeneous mice, chosen to avoid genotype-specific effects on disease susceptibility. Disease patterns of rapamycin-treated mice did not differ from those of control mice. In a separate study, rapamycin fed to mice beginning at 270 days of age also increased survival in both males and females, based on an interim analysis conducted near the median survival point. Rapamycin may extend lifespan by postponing death from cancer, by retarding mechanisms of ageing, or both. These are the first results to demonstrate a role for mTOR signalling in the regulation of mammalian lifespan, as well as pharmacological extension of lifespan in both genders. These findings have implications for further development of interventions targeting mTOR for the treatment and prevention of age-related diseases.

Koji Atarashi,  Tadatsugu Taniguchi,  Akemi Imaoka … (2011)
CD4(+) T regulatory cells (T(regs)), which express the Foxp3 transcription factor, play a critical role in the maintenance of immune homeostasis. Here, we show that in mice, T(regs) were most abundant in the colonic mucosa. The spore-forming component of indigenous intestinal microbiota, particularly clusters IV and XIVa of the genus Clostridium, promoted T(reg) cell accumulation. Colonization of mice by a defined mix of Clostridium strains provided an environment rich in transforming growth factor-β and affected Foxp3(+) T(reg) number and function in the colon. Oral inoculation of Clostridium during the early life of conventionally reared mice resulted in resistance to colitis and systemic immunoglobulin E responses in adult mice, suggesting a new therapeutic approach to autoimmunity and allergy.

Luigi Fontana,  Linda Partridge,  Valter D Longo … (2010)
When the food intake of organisms such as yeast and rodents is reduced (dietary restriction), they live longer than organisms fed a normal diet. A similar effect is seen when the activity of nutrient-sensing pathways is reduced by mutations or chemical inhibitors. In rodents, both dietary restriction and decreased nutrient-sensing pathway activity can lower the incidence of age-related loss of function and disease, including tumors and neurodegeneration. Dietary restriction also increases life span and protects against diabetes, cancer, and cardiovascular disease in rhesus monkeys, and in humans it causes changes that protect against these age-related pathologies. Tumors and diabetes are also uncommon in humans with mutations in the growth hormone receptor, and natural genetic variants in nutrient-sensing pathways are associated with increased human life span. Dietary restriction and reduced activity of nutrient-sensing pathways may thus slow aging by similar mechanisms, which have been conserved during evolution. We discuss these findings and their potential application to prevention of age-related disease and promotion of healthy aging in humans, and the challenge of possible negative side effects.