Does Insulin Resistance Drive the Association between Hyperglycemia and Cardiovascular Risk? 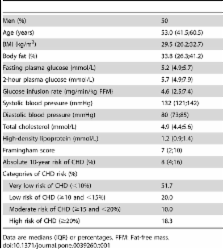 The association between plasma glucose levels and CVD risk is mainly explained by insulin resistance, which raises the question of whether glucose lowering per se without changes in the processes that underlie hyperglycemia should be the sole clinical paradigm in the treatment of type 2 diabetes or its prevention.

(2001)
New diagnostic criteria for diabetes based on fasting blood glucose (FBG) level were approved by the American Diabetes Association. The impact of using FBG only has not been evaluated thoroughly. The fasting and the 2-hour glucose (2h-BG) criteria were compared with regard to the prediction of mortality. Existing baseline data on glucose level at fasting and 2 hours after a 75-g oral glucose tolerance test from 10 prospective European cohort studies including 15 388 men and 7126 women aged 30 to 89 years, with a median follow-up of 8.8 years, were analyzed. Hazards ratios for death from all causes, cardiovascular disease, coronary heart disease, and stroke were estimated. Multivariate Cox regression analyses showed that the inclusion of FBG did not add significant information on the prediction of 2h-BG alone (P>.10 for various causes), whereas the addition of 2h-BG to FBG criteria significantly improved the prediction (P<.001 for all causes and P<.005 for cardiovascular disease). In a model including FBG and 2h-BG simultaneously, hazards ratios (95% confidence intervals) in subjects with diabetes on 2h-BG were 1.73 (1.45-2.06) for all causes, 1.40 (1.02-1.92) for cardiovascular disease, 1.56 (1.03-2.36) for coronary heart disease, and 1.29 (0.66-2.54) for stroke mortality, compared with the normal 2h-BG group. Compared with the normal FBG group, the corresponding hazards ratios in subjects with diabetes on FBG were 1.21 (1.01-1.44), 1.20 (0.88-1.64), 1.09 (0.71-1.67), and 1.64 (0.88-3.07), respectively. The largest number of excess deaths was observed in subjects who had impaired glucose tolerance but normal FBG levels. The 2h-BG is a better predictor of deaths from all causes and cardiovascular disease than is FBG.

Publisher ID: PONE-D-12-07716
DOI: 10.1371/journal.pone.0039260
PMC ID: 3376119
PubMed ID: 22720085
Copyright statement: Færch et al. This is an open-access article distributed under the terms of the Creative Commons Attribution License, which permits unrestricted use, distribution, and reproduction in any medium, provided the original author and source are credited.