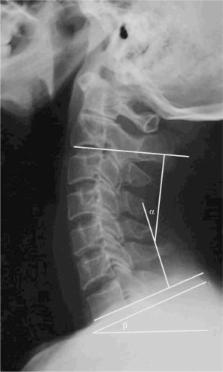 Based on preoperative standing lateral radiographs, 90 patients were classified according to T1 slope that was higher or lower than the 50th percentile (high T1 or low T1, 28 and 62 patients, respectively). Patients were also classified as SASD or non-SASD (38 and 52 patients, respectively) determined by radiographs at final follow-up. Visual analog scale (VAS) and Neck Disability Index (NDI) scores for neck and arm pain were noted, and changes in the sagittal alignment of the cervical spine (SACS), functional spinal unit (FSU) angle, and FSU range of motion (ROM) were also noted. Univariate and multivariate logistic regression analyses were performed to determine the risk factors for SASD.

High T1 slope and endplate coverage discrepancy were associated with SASD after BCDA. Patients with a high preoperative T1 slope have a smaller FSU angle and more neck pain after BCDA.

K. Daniel Riew,  Knut Heller,  Trevor P. Anderson … (2011)
The published two-year results of the pivotal U.S. Food and Drug Administration investigational device exemption trial with the use of the Bryan cervical disc arthroplasty compared with anterior cervical discectomy with fusion for treating single-level degenerative cervical disc disease revealed a significantly superior overall success rate in the arthroplasty group. The purpose of this study was to evaluate the midterm safety and effectiveness of the Bryan disc as an alternative to arthrodesis following anterior cervical discectomy. A prospective, multicenter randomized clinical trial was undertaken for the treatment of persistent radiculopathy or myelopathy due to single-level cervical disc herniations or spondylosis. Patients were randomized to treatment with either the Bryan disc (the arthroplasty group; 242 patients) or anterior cervical discectomy and fusion (the fusion group; 221 patients). Patients completed preoperative and postoperative self-assessment forms at specified intervals and had radiographs made preoperatively, at six weeks, and at three, six, twelve, twenty-four, and forty-eight months after surgery. The primary outcome measure was overall success, a composite variable of safety and efficacy measures. Numerous secondary measures were assessed. The follow-up data for up to twenty-four months have been previously published. We report in the present study the forty-eight-month data collected on 181 patients who received the Bryan disc and 138 patients who underwent anterior cervical discectomy and fusion. The study groups were demographically similar. Substantial reduction in Neck Disability Index scores occurred in both groups compared with preoperative values. The greater improvement in the Neck Disability Index score in the Bryan disc cohort persisted through the four-year follow-up period (p < 0.001). The four-year overall success rates were 85.1% and 72.5% for the arthroplasty and fusion groups, respectively (p = 0.004). The improvement in the arm pain score was substantial for both groups and significantly greater in the Bryan disc cohort (p = 0.028), and the neck pain scores showed persistently greater improvement in the Bryan disc group at forty-eight months of follow-up (p = 0.001). Short Form-36 physical component score improvement remained greater among the Bryan disc cohort (p = 0.007). The mean range of motion for the Bryan disc was 8.08° and 8.48° at twenty-four and forty-eight months, respectively. Total and serious adverse event rates were similar between the groups. The forty-eight-month follow-up data in the present report showed consistent, sustained significantly superior outcomes for cervical spine arthroplasty compared with cervical spine fusion. The arthroplasty cohort continued to show significantly greater improvements in Neck Disability Index, neck pain score, arm pain score, and Short Form-36 physical component score, as well as the primary outcome measure, overall success, at forty-eight months following surgery.

Jan Goffin,  Bengt Lind,  Frederick C. Leung … (2005)
Heterotopic ossification (HO) is a well-known complication in joint replacements, but its occurrence and clinical effect on cervical artificial discs has not yet been studied. The purpose of this study was to investigate the incidence of HO in cervical disc replacement, to identify any associated risk factors for HO, and to examine the relationship of HO with clinical outcomes. The patient data for this observational study were obtained from the original Bryan Disc Study by the European Consortium. Occurrence of HO was defined by the McAfee classification on the cervical lateral x-rays at 12 months after surgery. Secondary outcome measurements included Odom's criteria and the Medical Outcomes Study Short-Form 36-Item Health Survey. Sixteen (17.8%) of the 90 studied patients experienced HO, and 6 (6.7%) of these patients experienced Grade 3 and 4 HO. Ten patients' (11%) artificial discs were shown to have movement of less than 2 degrees on flexion and extension cervical x-ray at 12 months, with 4 of these patients having HO of Grade 3 or 4. Male sex (chi2 = 4.1; P = 0.0407) and older patients (P = 0.023; odds ratio = 1.10; 95% confidence interval = 1.01-1.19) were associated with development of HO. There is a strong association of the occurrence of HO with subsequent loss of movement of the implanted cervical artificial disc. We have found that sex and age are two possible risk factors in the development of HO after cervical disc replacement.