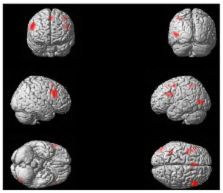 Michiru Makuuchi,  Angela Friederici,  Alfred Anwander … (2009)
In contrast to simple structures in animal vocal behavior, hierarchical structures such as center-embedded sentences manifest the core computational faculty of human language. Previous artificial grammar learning studies found that the left pars opercularis (LPO) subserves the processing of hierarchical structures. However, it is not clear whether this area is activated by the structural complexity per se or by the increased memory load entailed in processing hierarchical structures. To dissociate the effect of structural complexity from the effect of memory cost, we conducted a functional magnetic resonance imaging study of German sentence processing with a 2-way factorial design tapping structural complexity (with/without hierarchical structure, i.e., center-embedding of clauses) and working memory load (long/short distance between syntactically dependent elements; i.e., subject nouns and their respective verbs). Functional imaging data revealed that the processes for structure and memory operate separately but co-operatively in the left inferior frontal gyrus; activities in the LPO increased as a function of structural complexity, whereas activities in the left inferior frontal sulcus (LIFS) were modulated by the distance over which the syntactic information had to be transferred. Diffusion tensor imaging showed that these 2 regions were interconnected through white matter fibers. Moreover, functional coupling between the 2 regions was found to increase during the processing of complex, hierarchically structured sentences. These results suggest a neuroanatomical segregation of syntax-related aspects represented in the LPO from memory-related aspects reflected in the LIFS, which are, however, highly interconnected functionally and anatomically.

W Eddy,  K Thulborn,  M Just … (1996)
The comprehension of visually presented sentences produces brain activation that increases with the linguistic complexity of the sentence. The volume of neural tissue activated (number of voxels) during sentence comprehension was measured with echo-planar functional magnetic resonance imaging. The modulation of the volume of activation by sentence complexity was observed in a network of four areas: the classical left-hemisphere language areas (the left laterosuperior temporal cortex, or Wernicke's area, and the left inferior frontal gyrus, or Broca's area) and their homologous right-hemisphere areas, although the right areas had much smaller volumes of activation than did the left areas. These findings generally indicate that the amount of neural activity that a given cognitive process engenders is dependent on the computational demand that the task imposes.

Lectures on Government and Binding.