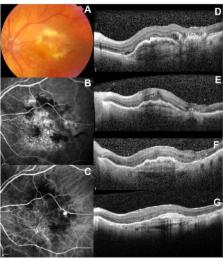 In a prospective study, best-corrected visual acuity (BCVA) and optical coherence tomography (OCT) data were collected for 62 eyes of 62 patients, with serous or vascular PED associated with CNV secondary to AMD. Intravitreal ranibizumab 0.5 mg was administered with a loading phase of three consecutive monthly injections, followed by monthly review with further treatment, as indicated according to the retreatment criteria of the PrONTO study. The change in visual acuity and PED height from baseline to month 12 after the first injection was determined.

Sixty-one eyes of 61 patients (one of the patients developed retinal pigment epithelial tear and was excluded from the study) were assessed at the 12-month follow-up examination. There were two types of PED, including vascular PED in 32 patients (Group A) and serous PED (Group B) in 29 patients. The mean improvement of mean BCVA from baseline to 12 months was 0.09 logMAR (Logarithm of the Minimum Angle of Resolution) in Group A and 0.13 logMAR in Group B. Both groups showed significant improvement of the mean BCVA 12 months after the first injection compared with the baseline value ( P < 0.05). In relation to the PED height, the mean decrease of mean PED height from baseline to 12 months was 135 μm in Group A and 180 μm in Group B. Both groups showed significant reduction of the PED height during the follow-up period ( P < 0.01). The PED anatomical response to ranibizumab was not correlated with the BCVA improvement in any of the groups. Apart from one patient who developed pigment epithelial tear no other complications were documented.

Ranibizumab is an effective and safe treatment for improving vision in patients with serous and vascular PED, although the anatomical response of the PED to ranibizumab may not correlate directly with the visual outcome.

,  A Adamis,  Brian Cunningham … (2004)
Pegaptanib, an anti-vascular endothelial growth factor therapy, was evaluated in the treatment of neovascular age-related macular degeneration. We conducted two concurrent, prospective, randomized, double-blind, multicenter, dose-ranging, controlled clinical trials using broad entry criteria. Intravitreous injection into one eye per patient of pegaptanib (at a dose of 0.3 mg, 1.0 mg, or 3.0 mg) or sham injections were administered every 6 weeks over a period of 48 weeks. The primary end point was the proportion of patients who had lost fewer than 15 letters of visual acuity at 54 weeks. In the combined analysis of the primary end point (for a total of 1186 patients), efficacy was demonstrated, without a dose-response relationship, for all three doses of pegaptanib (P<0.001 for the comparison of 0.3 mg with sham injection; P<0.001 for the comparison of 1.0 mg with sham injection; and P=0.03 for the comparison of 3.0 mg with sham injection). In the group given pegaptanib at 0.3 mg, 70 percent of patients lost fewer than 15 letters of visual acuity, as compared with 55 percent among the controls (P<0.001). The risk of severe loss of visual acuity (loss of 30 letters or more) was reduced from 22 percent in the sham-injection group to 10 percent in the group receiving 0.3 mg of pegaptanib (P<0.001). More patients receiving pegaptanib (0.3 mg), as compared with sham injection, maintained their visual acuity or gained acuity (33 percent vs. 23 percent; P=0.003). As early as six weeks after beginning therapy with the study drug, and at all subsequent points, the mean visual acuity among patients receiving 0.3 mg of pegaptanib was better than in those receiving sham injections (P<0.002). Among the adverse events that occurred, endophthalmitis (in 1.3 percent of patients), traumatic injury to the lens (in 0.7 percent), and retinal detachment (in 0.6 percent) were the most serious and required vigilance. These events were associated with a severe loss of visual acuity in 0.1 percent of patients. Pegaptanib appears to be an effective therapy for neovascular age-related macular degeneration. Its long-term safety is not known. Copyright 2004 Massachusetts Medical Society.

The five-year incidence and progression of age-related maculopathy: the Beaver Dam Eye Study.

Jakob S Jensen,  John Klein,  S Meuer … (1996)
The aim of the study was to describe the incidence and progression of retinal drusen, retinal pigmentary abnormalities, and signs of late age-related maculopathy. A population of 3583 adults (range, 43-86 years of age at baseline) living in Beaver Dam, Wisconsin, was studied during a 5-year period. Characteristics of drusen and other lesions typical of age-related maculopathy were determined by grading stereoscopic color fundus photographs using the Wisconsin Age-Related Maculopathy Grading System. There was a statistically significant increased incidence of age-related maculopathy lesions with age (P or = 250 microm, 6.5% vs. 0.2%), soft indistinct drusen (16.3% vs. 1.8%), retinal pigment abnormalities (12.9% vs. 0.9%), exudative macular degeneration (1.8% vs. 0%), and pure geographic atrophy (1.7% vs. 0%). After adjusting for age, the incidence of early age-related maculopathy was 2.2 times (95% confidence interval 1.6, 3.2) as likely in women 75 years of age or older compared with men this age. At follow-up, late age-related macular degeneration was more likely to develop in eyes with soft indistinct drusen (6.5% vs. 0.1%) or retinal pigmentary abnormalities (7.1% vs. 0.1%) at baseline than in eyes without these lesions. These population-based estimates document the high incidence of signs of age-related maculopathy in people 75 years of age or older, and in women compared with men that age. The findings demonstrate that the presence of soft drusen and pigmentary abnormalities significantly increases the risk for the development of geographic atrophy and exudative macular degeneration.

Ronald Klein,  M Palta,  J. Mareš … (1999)
To investigate the prevalence of and risk factors for age-related maculopathy (ARM) in three racial/ethnic groups: non-Hispanic whites, non-Hispanic blacks, and Mexican-Americans. A nationally representative population-based, cross-sectional study. A total of 8270 persons 40 years of age or older, a sample of the Third National Health and Nutrition Examination Survey. Age-related maculopathy was determined by the grading of fundus photographs using a standardized protocol. The prevalence of any ARM in the civilian noninstitutionalized United States population including those 40 years of age or older was 9.4% (95% confidence interval [CI], 8.2, 10.6) as estimated from the sample. After adjusting for age, there was no difference in the prevalence of early ARM (defined largely by the presence of soft drusen) by ethnic/racial group. However, for the less frequent component lesions of early ARM (increased retinal pigment and retinal pigment epithelial depigmentation), the odds ratios (95% CIs) comparing non-Hispanic blacks to non-Hispanic whites were 0.47 (0.31, 0.74) and 0.59 (0.33, 1.04), respectively, and for comparing Mexican-Americans to non-Hispanic whites, they were 0.41 (0.21, 0.81) and 0.72 (0.44, 1.19), respectively. For late ARM, the odds ratio (95% CI) for non-Hispanic blacks compared to non-Hispanic whites was 0.34 (0.10, 1.18) and for Mexican-Americans compared to non-Hispanic whites, it was 0.25 (0.07, 0.90). Other than age, none of the personal, medical, or physiologic variables studied were statistically significantly associated with any of the ARM endpoints in any of the three races/ethnic groups. Overall, rates of any ARM (including all early and late lesions) are not significantly different among non-Hispanic blacks, Mexican-Americans, and non-Hispanic whites. However, the rates of individual lesions suggest that non-Hispanic whites and Mexican-Americans may be protected against retinal pigment abnormalities and lesions associated with late ARM. There appears to be little influence of personal, medical, and environmental factors studied on these results. Further studies in larger populations of older persons in these ethnic groups would likely clarify these relations.