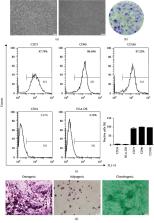 ROS: Crucial Intermediators in the Pathogenesis of Intervertebral Disc Degeneration

Chencheng Feng,  Minghui Yang,  Minghong Lan … (2017)
Excessive reactive oxygen species (ROS) generation in degenerative intervertebral disc (IVD) indicates the contribution of oxidative stress to IVD degeneration (IDD), giving a novel insight into the pathogenesis of IDD. ROS are crucial intermediators in the signaling network of disc cells. They regulate the matrix metabolism, proinflammatory phenotype, apoptosis, autophagy, and senescence of disc cells. Oxidative stress not only reinforces matrix degradation and inflammation, but also promotes the decrease in the number of viable and functional cells in the microenvironment of IVDs. Moreover, ROS modify matrix proteins in IVDs to cause oxidative damage of disc extracellular matrix, impairing the mechanical function of IVDs. Consequently, the progression of IDD is accelerated. Therefore, a therapeutic strategy targeting oxidative stress would provide a novel perspective for IDD treatment. Various antioxidants have been proposed as effective drugs for IDD treatment. Antioxidant supplementation suppresses ROS production in disc cells to promote the matrix synthesis of disc cells and to prevent disc cells from death and senescence in vitro. However, there is not enough in vivo evidence to support the efficiency of antioxidant supplementation to retard the process of IDD. Further investigations based on in vivo and clinical studies will be required to develop effective antioxidative therapies for IDD.

Autophagy is activated in compression-induced cell degeneration and is mediated by reactive oxygen species in nucleus pulposus cells exposed to compression.