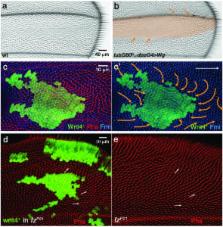 Planar cell polarity (PCP) is cellular polarity within the plane of an epithelial tissue or organ. PCP is established through interactions of the core Frizzled(Fz)/PCP factors and although their molecular interactions are beginning to be understood, the upstream input providing directional bias/polarity axis remains unknown. Among core PCP genes, Fz is unique as it regulates PCP both cell-autonomously and non-autonomously, with the extra-cellular domain of Fz acting as a ligand for Van-Gogh (Vang). We demonstrate in Drosophila wings that Wg and dWnt4 provide instructive regulatory input for PCP axis determination, establishing polarity axes along their graded distribution and perpendicular to their expression domain borders. Loss-of-function studies reveal that Wg/dWnt4 act redundantly in PCP determination. They affect PCP by modulating the intercellular interaction between Fz and Vang, which is thought to be a key step in setting up initial polarity, thus providing directionality to the PCP process.

N Perrimon,  H. Brand (1993)
We have designed a system for targeted gene expression that allows the selective activation of any cloned gene in a wide variety of tissue- and cell-specific patterns. The gene encoding the yeast transcriptional activator GAL4 is inserted randomly into the Drosophila genome to drive GAL4 expression from one of a diverse array of genomic enhancers. It is then possible to introduce a gene containing GAL4 binding sites within its promoter, to activate it in those cells where GAL4 is expressed, and to observe the effect of this directed misexpression on development. We have used GAL4-directed transcription to expand the domain of embryonic expression of the homeobox protein even-skipped. We show that even-skipped represses wingless and transforms cells that would normally secrete naked cuticle into denticle secreting cells. The GAL4 system can thus be used to study regulatory interactions during embryonic development. In adults, targeted expression can be used to generate dominant phenotypes for use in genetic screens. We have directed expression of an activated form of the Dras2 protein, resulting in dominant eye and wing defects that can be used in screens to identify other members of the Dras2 signal transduction pathway.

Cell flow reorients the axis of planar polarity in the wing epithelium of Drosophila.

Stephen Roper,  Frank Jülicher,  Reza Farhadifar … (2010)
Planar cell polarity (PCP) proteins form polarized cortical domains that govern polarity of external structures such as hairs and cilia in both vertebrate and invertebrate epithelia. The mechanisms that globally orient planar polarity are not understood, and are investigated here in the Drosophila wing using a combination of experiment and theory. Planar polarity arises during growth and PCP domains are initially oriented toward the well-characterized organizer regions that control growth and patterning. At pupal stages, the wing hinge contracts, subjecting wing-blade epithelial cells to anisotropic tension in the proximal-distal axis. This results in precise patterns of oriented cell elongation, cell rearrangement and cell division that elongate the blade proximo-distally and realign planar polarity with the proximal-distal axis. Mutation of the atypical Cadherin Dachsous perturbs the global polarity pattern by altering epithelial dynamics. This mechanism utilizes the cellular movements that sculpt tissues to align planar polarity with tissue shape. Copyright 2010 Elsevier Inc. All rights reserved.

Peter Wilson,  M Tada,  L Saúde … (2000)
Vertebrate gastrulation involves the specification and coordinated movement of large populations of cells that give rise to the ectodermal, mesodermal and endodermal germ layers. Although many of the genes involved in the specification of cell identity during this process have been identified, little is known of the genes that coordinate cell movement. Here we show that the zebrafish silberblick (slb) locus encodes Wnt11 and that Slb/Wnt11 activity is required for cells to undergo correct convergent extension movements during gastrulation. In the absence of Slb/Wnt11 function, abnormal extension of axial tissue results in cyclopia and other midline defects in the head. The requirement for Slb/Wnt11 is cell non-autonomous, and our results indicate that the correct extension of axial tissue is at least partly dependent on medio-lateral cell intercalation in paraxial tissue. We also show that the slb phenotype is rescued by a truncated form of Dishevelled that does not signal through the canonical Wnt pathway, suggesting that, as in flies, Wnt signalling might mediate morphogenetic events through a divergent signal transduction cascade. Our results provide genetic and experimental evidence that Wnt activity in lateral tissues has a crucial role in driving the convergent extension movements underlying vertebrate gastrulation.