Gait Generation and Its Energy Efficiency Based on Rat Neuromusculoskeletal Model 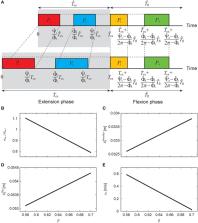 Changing gait is crucial for adaptive and smooth animal locomotion. Although it remains unclear what makes animals decide on a specific gait, energy efficiency is an important factor. It has been reported that the relationship of oxygen consumption with speed is U-shaped for each horse gait and that different gaits have different speeds at which oxygen consumption is minimized. This allows the horse to produce energy-efficient locomotion in a wide speed range by changing gait. However, the underlying mechanisms causing oxygen consumption to be U-shaped and the speeds for the minimum consumption to be different between different gaits are unclear. In the present study, we used a neuromusculoskeletal model of the rat to examine the mechanism from a dynamic viewpoint. Specifically, we constructed the musculoskeletal part of the model based on empirical anatomical data on rats and the motor control model based on the physiological concepts of the spinal central pattern generator and muscle synergy. We also incorporated the posture and speed regulation models at the levels of the brainstem and cerebellum. Our model achieved walking through forward dynamic simulation, and the simulated joint kinematics and muscle activities were compared with animal data. Our model also achieved trotting by changing only the phase difference of the muscle-synergy-based motor commands between the forelimb and hindlimb. Furthermore, the speed of each gait varied by changing only the extension phase duration and amplitude of the muscle synergy-based motor commands and the reference values for the regulation models. The relationship between cost of transport (CoT) and speed was U-shaped for both the generated walking and trotting, and the speeds for the minimum CoT were different for the two gaits, as observed in the oxygen consumption of horses. We found that the resonance property and the posture and speed regulations contributed to the CoT shape and difference in speeds for the minimum CoT. We further discussed the energy efficiency of gait based on the simulation results.

Y. Ivanenko,  G. Cappellini,  Richard E. Poppele … (2006)
Despite distinct differences between walking and running, the two types of human locomotion are likely to be controlled by shared pattern-generating networks. However, the differences between their kinematics and kinetics imply that corresponding muscle activations may also be quite different. We examined the differences between walking and running by recording kinematics and electromyographic (EMG) activity in 32 ipsilateral limb and trunk muscles during human locomotion, and compared the effects of speed (3-12 km/h) and gait. We found that the timing of muscle activation was accounted for by five basic temporal activation components during running as we previously found for walking. Each component was loaded on similar sets of leg muscles in both gaits but generally on different sets of upper trunk and shoulder muscles. The major difference between walking and running was that one temporal component, occurring during stance, was shifted to an earlier phase in the step cycle during running. These muscle activation differences between gaits did not simply depend on locomotion speed as shown by recordings during each gait over the same range of speeds (5-9 km/h). The results are consistent with an organization of locomotion motor programs having two parts, one that organizes muscle activation during swing and another during stance and the transition to swing. The timing shift between walking and running reflects therefore the difference in the relative duration of the stance phase in the two gaits.

Locomotor primitives in newborn babies and their development.

Y. Ivanenko,  Germana Cappellini,  Marika Cicchese … (2011)
How rudimentary movements evolve into sophisticated ones during development remains unclear. It is often assumed that the primitive patterns of neural control are suppressed during development, replaced by entirely new patterns. Here we identified the basic patterns of lumbosacral motoneuron activity from multimuscle recordings in stepping neonates, toddlers, preschoolers, and adults. Surprisingly, we found that the two basic patterns of stepping neonates are retained through development, augmented by two new patterns first revealed in toddlers. Markedly similar patterns were observed also in the rat, cat, macaque, and guineafowl, consistent with the hypothesis that, despite substantial phylogenetic distances and morphological differences, locomotion in several animal species is built starting from common primitives, perhaps related to a common ancestral neural network.

A limited set of muscle synergies for force control during a postural task.

Angela H. Ting,  M. MacPherson,  Sharlene L H Ting (2004)
Recently developed computational techniques have been used to reduce muscle activation patterns of high complexity to a simple synergy organization and to bring new insights to the long-standing degrees of freedom problem in motor control. We used a nonnegative factorization approach to identify muscle synergies during postural responses in the cat and to examine the functional significance of such synergies for natural behaviors. We hypothesized that the simplification of neural control afforded by muscle synergies must be matched by a similar reduction in degrees of freedom at the biomechanical level. Electromyographic data were recorded from 8-15 hindlimb muscles of cats exposed to 16 directions of support surface translation. Results showed that as few as four synergies could account for >95% of the automatic postural response across all muscles and all directions. Each synergy was activated for a specific set of perturbation directions, and moreover, each was correlated with a unique vector of endpoint force under the limb. We suggest that, within the context of active balance control, postural synergies reflect a neural command signal that specifies endpoint force of a limb.