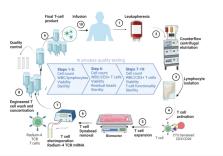 Adoptive cellular therapy (ACT) with genetically modified T cells aims to redirect T cells against resistant cancers through introduction of a T cell receptor (TCR). The Radium-4 TCR was isolated from a responding patient in a cancer vaccination study and recognizes the enzymatic component of human Telomerase Reverse Transcriptase (hTERT) presented on MHC class II (HLA-DP04). hTERT is a constitutively overexpressed tumor-associated antigen present in most human cancers, including non-small-cell lung cancer (NSCLC), which is the second most common type of cancer worldwide. Treatment alternatives for relapsing NSCLC are limited and survival is poor. To improve patient outcome we designed a TCR-based ACT study targeting hTERT.

Treatment for metastatic NSCLC is scarce and new personalized treatment options are in high demand. hTERT is a tumor target applicable to numerous cancer types. This proof-of-concept study will explore for the first time the safety and efficacy of TCR mRNA electroporated autologous T cells targeting hTERT. The T-RAD study will thus evaluate an attractive candidate for future immunotherapy of solid tumors.

Mark Robinson, Davis J. McCarthy, Gordon K. Smyth (2009)
Summary: It is expected that emerging digital gene expression (DGE) technologies will overtake microarray technologies in the near future for many functional genomics applications. One of the fundamental data analysis tasks, especially for gene expression studies, involves determining whether there is evidence that counts for a transcript or exon are significantly different across experimental conditions. edgeR is a Bioconductor software package for examining differential expression of replicated count data. An overdispersed Poisson model is used to account for both biological and technical variability. Empirical Bayes methods are used to moderate the degree of overdispersion across transcripts, improving the reliability of inference. The methodology can be used even with the most minimal levels of replication, provided at least one phenotype or experimental condition is replicated. The software may have other applications beyond sequencing data, such as proteome peptide count data. Availability: The package is freely available under the LGPL licence from the Bioconductor web site (http://bioconductor.org). Contact: mrobinson@wehi.edu.au

Visualizing and interpreting cancer genomics data via the Xena platform

Shannon Maude, Noelle Frey, Pamela Shaw … (2014)
Relapsed acute lymphoblastic leukemia (ALL) is difficult to treat despite the availability of aggressive therapies. Chimeric antigen receptor-modified T cells targeting CD19 may overcome many limitations of conventional therapies and induce remission in patients with refractory disease. We infused autologous T cells transduced with a CD19-directed chimeric antigen receptor (CTL019) lentiviral vector in patients with relapsed or refractory ALL at doses of 0.76×10(6) to 20.6×10(6) CTL019 cells per kilogram of body weight. Patients were monitored for a response, toxic effects, and the expansion and persistence of circulating CTL019 T cells. A total of 30 children and adults received CTL019. Complete remission was achieved in 27 patients (90%), including 2 patients with blinatumomab-refractory disease and 15 who had undergone stem-cell transplantation. CTL019 cells proliferated in vivo and were detectable in the blood, bone marrow, and cerebrospinal fluid of patients who had a response. Sustained remission was achieved with a 6-month event-free survival rate of 67% (95% confidence interval [CI], 51 to 88) and an overall survival rate of 78% (95% CI, 65 to 95). At 6 months, the probability that a patient would have persistence of CTL019 was 68% (95% CI, 50 to 92) and the probability that a patient would have relapse-free B-cell aplasia was 73% (95% CI, 57 to 94). All the patients had the cytokine-release syndrome. Severe cytokine-release syndrome, which developed in 27% of the patients, was associated with a higher disease burden before infusion and was effectively treated with the anti-interleukin-6 receptor antibody tocilizumab. Chimeric antigen receptor-modified T-cell therapy against CD19 was effective in treating relapsed and refractory ALL. CTL019 was associated with a high remission rate, even among patients for whom stem-cell transplantation had failed, and durable remissions up to 24 months were observed. (Funded by Novartis and others; CART19 ClinicalTrials.gov numbers, NCT01626495 and NCT01029366.).

This article was submitted to Molecular and Cellular Oncology, a section of the journal Frontiers in Oncology