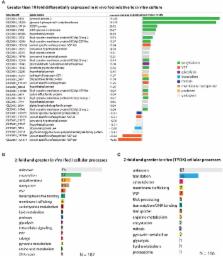 Giardia is a highly prevalent, understudied protistan parasite causing significant diarrheal disease worldwide. Its life cycle consists of two stages: infectious cysts ingested from contaminated food or water sources, and motile trophozoites that colonize and attach to the gut epithelium, later encysting to form new cysts that are excreted into the environment. Current understanding of parasite physiology in the host is largely inferred from transcriptomic studies using Giardia grown axenically or in co-culture with mammalian cell lines. The dearth of information about the diversity of host-parasite interactions occurring within distinct regions of the gastrointestinal tract has been exacerbated by a lack of methods to directly and non-invasively interrogate disease progression and parasite physiology in live animal hosts. By visualizing Giardia infections in the mouse gastrointestinal tract using bioluminescent imaging (BLI) of tagged parasites, we recently showed that parasites colonize the gut in high-density foci. Encystation is initiated in these foci throughout the entire course of infection, yet how the physiology of parasites within high-density foci in the host gut differs from that of cells in laboratory culture is unclear. Here we use BLI to precisely select parasite samples from high-density foci in the proximal intestine to interrogate in vivo Giardia gene expression in the host. Relative to axenic culture, we noted significantly higher expression (>10-fold) of oxidative stress, membrane transporter, and metabolic and structural genes associated with encystation in the high-density foci. These differences in gene expression within parasite foci in the host may reflect physiological changes associated with high-density growth in localized regions of the gut. We also identified and verified six novel cyst-specific proteins, including new components of the cyst wall that were highly expressed in these foci. Our in vivo transcriptome data support an emerging view that parasites encyst early in localized regions in the gut, possibly as a consequence of nutrient limitation, and also impact local metabolism and physiology.

Lorne Adam (2001)
Giardia lamblia is a common cause of diarrhea in humans and other mammals throughout the world. It can be distinguished from other Giardia species by light or electron microscopy. The two major genotypes of G. lamblia that infect humans are so different genetically and biologically that they may warrant separate species or subspecies designations. Trophozoites have nuclei and a well-developed cytoskeleton but lack mitochondria, peroxisomes, and the components of oxidative phosphorylation. They have an endomembrane system with at least some characteristics of the Golgi complex and encoplasmic reticulum, which becomes more extensive in encysting organisms. The primitive nature of the organelles and metabolism, as well as small-subunit rRNA phylogeny, has led to the proposal that Giardia spp. are among the most primitive eukaryotes. G. lamblia probably has a ploidy of 4 and a genome size of approximately 10 to 12 Mb divided among five chromosomes. Most genes have short 5' and 3' untranslated regions and promoter regions that are near the initiation codon. Trophozoites exhibit antigenic variation of an extensive repertoire of cysteine-rich variant-specific surface proteins. Expression is allele specific, and changes in expression from one vsp gene to another have not been associated with sequence alterations or gene rearrangements. The Giardia genome project promises to greatly increase our understanding of this interesting and enigmatic organism.

Drug targets and mechanisms of resistance in the anaerobic protozoa.

P Upcroft,  Jacqueline A Upcroft (2000)
The anaerobic protozoa Giardia duodenalis, Trichomonas vaginalis, and Entamoeba histolytica infect up to a billion people each year. G. duodenalis and E. histolytica are primarily pathogens of the intestinal tract, although E. histolytica can form abscesses and invade other organs, where it can be fatal if left untreated. T. vaginalis infection is a sexually transmitted infection causing vaginitis and acute inflammatory disease of the genital mucosa. T. vaginalis has also been reported in the urinary tract, fallopian tubes, and pelvis and can cause pneumonia, bronchitis, and oral lesions. Respiratory infections can be acquired perinatally. T. vaginalis infections have been associated with preterm delivery, low birth weight, and increased mortality as well as predisposing to human immunodeficiency virus infection, AIDS, and cervical cancer. All three organisms lack mitochondria and are susceptible to the nitroimidazole metronidazole because of similar low-redox-potential anaerobic metabolic pathways. Resistance to metronidazole and other drugs has been observed clinically and in the laboratory. Laboratory studies have identified the enzyme that activates metronidazole, pyruvate:ferredoxin oxidoreductase, to its nitroso form and distinct mechanisms of decreasing drug susceptibility that are induced in each organism. Although the nitroimidazoles have been the drug family of choice for treating the anaerobic protozoa, G. duodenalis is less susceptible to other antiparasitic drugs, such as furazolidone, albendazole, and quinacrine. Resistance has been demonstrated for each agent, and the mechanism of resistance has been investigated. Metronidazole resistance in T. vaginalis is well documented, and the principal mechanisms have been defined. Bypass metabolism, such as alternative oxidoreductases, have been discovered in both organisms. Aerobic versus anaerobic resistance in T. vaginalis is discussed. Mechanisms of metronidazole resistance in E. histolytica have recently been investigated using laboratory-induced resistant isolates. Instead of downregulation of the pyruvate:ferredoxin oxidoreductase and ferredoxin pathway as seen in G. duodenalis and T. vaginalis, E. histolytica induces oxidative stress mechanisms, including superoxide dismutase and peroxiredoxin. The review examines the value of investigating both clinical and laboratory-induced syngeneic drug-resistant isolates and dissection of the complementary data obtained. Comparison of resistance mechanisms in anaerobic bacteria and the parasitic protozoa is discussed as well as the value of studies of the epidemiology of resistance.

Cristina Aurrecoechea,  John Brestelli,  Brian Brunk … (2009)
GiardiaDB (http://GiardiaDB.org) and TrichDB (http://TrichDB.org) house the genome databases for Giardia lamblia and Trichomonas vaginalis, respectively, and represent the latest additions to the EuPathDB (http://EuPathDB.org) family of functional genomic databases. GiardiaDB and TrichDB employ the same framework as other EuPathDB sites (CryptoDB, PlasmoDB and ToxoDB), supporting fully integrated and searchable databases. Genomic-scale data available via these resources may be queried based on BLAST searches, annotation keywords and gene ID searches, GO terms, sequence motifs and other protein characteristics. Functional queries may also be formulated, based on transcript and protein expression data from a variety of platforms. Phylogenetic relationships may also be interrogated. The ability to combine the results from independent queries, and to store queries and query results for future use facilitates complex, genome-wide mining of functional genomic data.