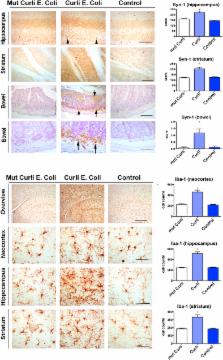 Misfolded alpha-synuclein (AS) and other neurodegenerative disorder proteins display prion-like transmission of protein aggregation. Factors responsible for the initiation of AS aggregation are unknown. To evaluate the role of amyloid proteins made by the microbiota we exposed aged rats and transgenic C. elegans to E. coli producing the extracellular bacterial amyloid protein curli. Rats exposed to curli-producing bacteria displayed increased neuronal AS deposition in both gut and brain and enhanced microgliosis and astrogliosis compared to rats exposed to either mutant bacteria unable to synthesize curli, or to vehicle alone. Animals exposed to curli producing bacteria also had more expression of TLR2, IL-6 and TNF in the brain than the other two groups. There were no differences among the rat groups in survival, body weight, inflammation in the mouth, retina, kidneys or gut epithelia, and circulating cytokine levels. AS-expressing C. elegans fed on curli-producing bacteria also had enhanced AS aggregation. These results suggest that bacterial amyloid functions as a trigger to initiate AS aggregation through cross-seeding and also primes responses of the innate immune system.

Dennis Selkoe,  John Hardy (2016)
Abstract Despite continuing debate about the amyloid β‐protein (or Aβ hypothesis, new lines of evidence from laboratories and clinics worldwide support the concept that an imbalance between production and clearance of Aβ42 and related Aβ peptides is a very early, often initiating factor in Alzheimer's disease (AD). Confirmation that presenilin is the catalytic site of γ‐secretase has provided a linchpin: all dominant mutations causing early‐onset AD occur either in the substrate (amyloid precursor protein, APP) or the protease (presenilin) of the reaction that generates Aβ. Duplication of the wild‐type APP gene in Down's syndrome leads to Aβ deposits in the teens, followed by microgliosis, astrocytosis, and neurofibrillary tangles typical of AD. Apolipoprotein E4, which predisposes to AD in > 40% of cases, has been found to impair Aβ clearance from the brain. Soluble oligomers of Aβ42 isolated from AD patients' brains can decrease synapse number, inhibit long‐term potentiation, and enhance long‐term synaptic depression in rodent hippocampus, and injecting them into healthy rats impairs memory. The human oligomers also induce hyperphosphorylation of tau at AD‐relevant epitopes and cause neuritic dystrophy in cultured neurons. Crossing human APP with human tau transgenic mice enhances tau‐positive neurotoxicity. In humans, new studies show that low cerebrospinal fluid (CSF) Aβ42 and amyloid‐PET positivity precede other AD manifestations by many years. Most importantly, recent trials of three different Aβ antibodies (solanezumab, crenezumab, and aducanumab) have suggested a slowing of cognitive decline in post hoc analyses of mild AD subjects. Although many factors contribute to AD pathogenesis, Aβ dyshomeostasis has emerged as the most extensively validated and compelling therapeutic target.