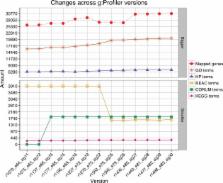 Functional enrichment analysis is a key step in interpreting gene lists discovered in diverse high-throughput experiments. g:Profiler studies flat and ranked gene lists and finds statistically significant Gene Ontology terms, pathways and other gene function related terms. Translation of hundreds of gene identifiers is another core feature of g:Profiler. Since its first publication in 2007, our web server has become a popular tool of choice among basic and translational researchers. Timeliness is a major advantage of g:Profiler as genome and pathway information is synchronized with the Ensembl database in quarterly updates. g:Profiler supports 213 species including mammals and other vertebrates, plants, insects and fungi. The 2016 update of g:Profiler introduces several novel features. We have added further functional datasets to interpret gene lists, including transcription factor binding site predictions, Mendelian disease annotations, information about protein expression and complexes and gene mappings of human genetic polymorphisms. Besides the interactive web interface, g:Profiler can be accessed in computational pipelines using our R package, Python interface and BioJS component. g:Profiler is freely available at http://biit.cs.ut.ee/gprofiler/.

The Sequence Ontology: a tool for the unification of genome annotations

Paul Kersey,  James Allen,  Irina M. Armean … (2015)
Ensembl Genomes (http://www.ensemblgenomes.org) is an integrating resource for genome-scale data from non-vertebrate species, complementing the resources for vertebrate genomics developed in the context of the Ensembl project (http://www.ensembl.org). Together, the two resources provide a consistent set of programmatic and interactive interfaces to a rich range of data including reference sequence, gene models, transcriptional data, genetic variation and comparative analysis. This paper provides an update to the previous publications about the resource, with a focus on recent developments. These include the development of new analyses and views to represent polyploid genomes (of which bread wheat is the primary exemplar); and the continued up-scaling of the resource, which now includes over 23 000 bacterial genomes, 400 fungal genomes and 100 protist genomes, in addition to 55 genomes from invertebrate metazoa and 39 genomes from plants. This dramatic increase in the number of included genomes is one part of a broader effort to automate the integration of archival data (genome sequence, but also associated RNA sequence data and variant calls) within the context of reference genomes and make it available through the Ensembl user interfaces.