Whole-Body Analysis of a Viral Infection: Vascular Endothelium is a Primary Target of Infectious Hematopoietic Necrosis Virus in Zebrafish Larvae 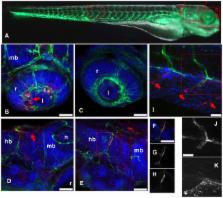 The progression of viral infections is notoriously difficult to follow in whole organisms. The small, transparent zebrafish larva constitutes a valuable system to study how pathogens spread. We describe here the course of infection of zebrafish early larvae with a heat-adapted variant of the Infectious Hematopoietic Necrosis Virus (IHNV), a rhabdovirus that represents an important threat to the salmonid culture industry. When incubated at 24°C, a permissive temperature for virus replication, larvae infected by intravenous injection died within three to four days. Macroscopic signs of infection followed a highly predictable course, with a slowdown then arrest of blood flow despite continuing heartbeat, followed by a loss of reactivity to touch and ultimately by death. Using whole-mount in situ hybridization, patterns of infection were imaged in whole larvae. The first infected cells were detectable as early as 6 hours post infection, and a steady increase in infected cell number and staining intensity occurred with time. Venous endothelium appeared as a primary target of infection, as could be confirmed in fli1:GFP transgenic larvae by live imaging and immunohistochemistry. Disruption of the first vessels took place before arrest of blood circulation, and hemorrhages could be observed in various places. Our data suggest that infection spread from the damaged vessels to underlying tissue. By shifting infected fish to a temperature of 28°C that is non-permissive for viral propagation, it was possible to establish when virus-generated damage became irreversible. This stage was reached many hours before any detectable induction of the host response. Zebrafish larvae infected with IHNV constitute a vertebrate model of an hemorrhagic viral disease. This tractable system will allow the in vivo dissection of host-virus interactions at the whole organism scale, a feature unrivalled by other vertebrate models.

The zebrafish larva is uniquely amenable to imaging among vertebrate models because of its small size, transparency, and ease of anesthesia, making it a useful model to understand host-pathogen interactions. We have performed the first detailed analysis of a viral infection in zebrafish. Infection of zebrafish larvae with a salmonid rhabdovirus adapted to growth at the appropriate temperatures resulted in a predictable succession of pathological signs before death. Detection of infected cells in whole larvae revealed that blood vessels were a major target of the virus, providing an explanation to hemorrhages and subsequent loss of blood flow observed in infected larvae. Destruction of vascular cells caused by the viral infection was readily observed in transgenic larvae with fluorescent endothelium. We could identify the critical moments of the infection with simple temperature shift experiments. This work provides a basis to dissect the role of host factors in controlling the propagation of viral infections.

Transplantation and in vivo imaging of multilineage engraftment in zebrafish bloodless mutants.

Shuo Lin,  David Traver,  Kenneth D. Poss … (2003)
The zebrafish is firmly established as a genetic model for the study of vertebrate blood development. Here we have characterized the blood-forming system of adult zebrafish. Each major blood lineage can be isolated by flow cytometry, and with these lineal profiles, defects in zebrafish blood mutants can be quantified. We developed hematopoietic cell transplantation to study cell autonomy of mutant gene function and to establish a hematopoietic stem cell assay. Hematopoietic cell transplantation can rescue multilineage hematopoiesis in embryonic lethal gata1-/- mutants for over 6 months. Direct visualization of fluorescent donor cells in embryonic recipients allows engraftment and homing events to be imaged in real time. These results provide a cellular context in which to study the genetics of hematopoiesis.

The vascular anatomy of the developing zebrafish: an atlas of embryonic and early larval development.

Sumio Isogai,  Masaharu Horiguchi,  Brant Weinstein (2001)
We have used confocal microangiography to examine and describe the vascular anatomy of the developing zebrafish, Danio rerio. This method and the profound optical clarity of zebrafish embryos make it possible to view the entire developing vasculature with unprecedented resolution. A staged series of three-dimensional images of the vascular system were collected beginning shortly after the onset of circulation at 1 day postfertilization through early- to midlarval stages at approximately 7 days postfertilization. Blood vessels in every region of the animal were imaged at each stage, and detailed "wiring patterns" were derived describing the interconnections between every major vessel. We present an overview of these data here in this paper and in an accompanying Web site "The interactive atlas of zebrafish vascular anatomy" online at (http://eclipse.nichd.nih.gov/nichd/lmg/redirect.html). We find a highly dynamic but also highly stereotypic pattern of vascular connections, with different sets of primitive embryonic vessels severing connections and rewiring in new configurations according to a reproducible plan. We also find that despite variation in the details of the vascular anatomy, the basic vascular plan of the developing zebrafish shows strong similarity to that of other vertebrates. This atlas will provide an invaluable foundation for future genetic and experimental studies of vascular development in the zebrafish.

Amy McCurley,  Gloria Callard (2008)
Background Research using the zebrafish model has experienced a rapid growth in recent years. Although real-time reverse transcription PCR (QPCR), normalized to an internal reference ("housekeeping") gene, is a frequently used method for quantifying gene expression changes in zebrafish, many commonly used housekeeping genes are known to vary with experimental conditions. To identify housekeeping genes that are stably expressed under different experimental conditions, and thus suitable as normalizers for QPCR in zebrafish, the present study evaluated the expression of eight commonly used housekeeping genes as a function of stage and hormone/toxicant exposure during development, and by tissue type and sex in adult fish. Results QPCR analysis was used to quantify mRNA levels of bactin1, tubulin alpha 1(tuba1), glyceraldehyde-3-phosphate dehydrogenase (gapdh), glucose-6-phosphate dehydrogenase (g6pd), TATA-box binding protein (tbp), beta-2-microglobulin (b2m), elongation factor 1 alpha (elfa), and 18s ribosomal RNA (18s) during development (2 – 120 hr postfertilization, hpf); in different tissue types (brain, eye, liver, heart, muscle, gonads) of adult males and females; and after treatment of embryos/larvae (24 – 96 hpf) with commonly used vehicles for administration and agents that represent known environmental endocrine disruptors. All genes were found to have some degree of variability under the conditions tested here. Rank ordering of expression stability using geNorm analysis identified 18s, b2m, and elfa as most stable during development and across tissue types, while gapdh, tuba1, and tpb were the most variable. Following chemical treatment, tuba1, bactin1, and elfa were the most stably expressed whereas tbp, 18s, and b2m were the least stable. Data also revealed sex differences that are gene- and tissue-specific, and treatment effects that are gene-, vehicle- and ligand-specific. When the accuracy of QPCR analysis was tested using different reference genes to measure suppression of cyp19a1b by an estrogen receptor antagonist and induction of cyp1a by an arylhydrocarbon receptor agonist, the direction and magnitude of effects with stable and unstable genes differed. Conclusion This study provides data that can be expected to aid zebrafish researchers in their initial choice of housekeeping genes for future studies, but underlines the importance of further validating housekeeping genes for each new experimental paradigm and fish species.

Publisher ID: 10-PLPA-RA-3702R2
DOI: 10.1371/journal.ppat.1001269
PMC ID: 3033377
PubMed ID: 21304884
Copyright statement: Ludwig et al. This is an open-access article distributed under the terms of the Creative Commons Attribution License, which permits unrestricted use, distribution, and reproduction in any medium, provided the original author and source are credited.