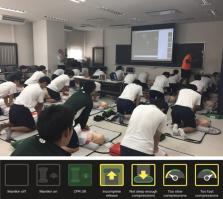 Cardiopulmonary resuscitation ( CPR) training in schools can increase the rate of bystander CPR. We assessed whether a “Quality CPR ( QCPR) Classroom” can support CPR performance by students trained by a teacher who is not a CPR instructor.

A cluster randomized trial was undertaken to assess the effectiveness of a 50‐min Practice While Watch CPR training program enhanced by QCPR Classroom, which used 42 manikins connected by Bluetooth to real‐time feedback monitoring. Fifty‐seven students were divided into Group 1, taught by a non‐ CPR‐instructor, and Group 2, taught by a CPR instructor. Psychomotor and cognitive tests were administered before and after training. Primary outcomes were post‐training compression depth and rate and percent of improvement in adequate depth, recoil, and overall score. The secondary outcome was risk improvement.

Using a QCPR Classroom to enhance CPR teaching by a non‐ CPR‐instructor results in similar or better outcomes compared to using a CPR instructor. Use of a Practice While Watch QCPR Classroom will provide adequate quality in preparing students for CPR.

In this study, we assessed whether a “Quality CPR (QCPR) Classroom”, a cardiopulmonary resuscitation (CPR) feedback device for use in classrooms, can support CPR performance among students trained by a teacher who is not a CPR instructor. We compared CPR skills and cognitive knowledge between the group led by an experienced teacher who was not a CPR instructor and the group led by an experienced CPR teacher. The groups did not differ in improvement.

Ingela Hasselqvist-Ax,  Gabriel Riva,  Johan Herlitz … (2015)
Three million people in Sweden are trained in cardiopulmonary resuscitation (CPR). Whether this training increases the frequency of bystander CPR or the survival rate among persons who have out-of-hospital cardiac arrests has been questioned.

Association of Bystander and First-Responder Intervention With Survival After Out-of-Hospital Cardiac Arrest in North Carolina, 2010-2013.