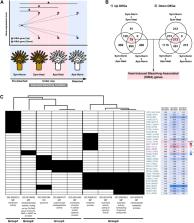 Stable endosymbiotic relationships between cnidarian animals and dinoflagellate algae are vital for sustaining coral reef ecosystems. Recent studies have shown that elevated seawater temperatures can cause the collapse of their endosymbiosis, known as ‘bleaching’, and result in mass mortality. However, the molecular interplay between temperature responses and symbiotic states still remains unclear. To identify candidate genes relevant to the symbiotic stability, we performed transcriptomic analyses under multiple conditions using the symbiotic and apo-symbiotic (symbiont free) Exaiptasia diaphana, an emerging model sea anemone. Gene expression patterns showed that large parts of differentially expressed genes in response to heat stress were specific to the symbiotic state, suggesting that the host sea anemone could react to environmental changes in a symbiotic state-dependent manner. Comparative analysis of expression profiles under multiple conditions highlighted candidate genes potentially important in the symbiotic state transition under heat-induced bleaching. Many of these genes were functionally associated with carbohydrate and protein metabolisms in lysosomes. Symbiont algal genes differentially expressed in hospite encode proteins related to heat shock response, calcium signaling, organellar protein transport, and sugar metabolism. Our data suggest that heat stress alters gene expression in both the hosts and symbionts. In particular, heat stress may affect the lysosome-mediated degradation and transportation of substrates such as carbohydrates through the symbiosome (phagosome-derived organelle harboring symbiont) membrane, which potentially might attenuate the stability of symbiosis and lead to bleaching-associated symbiotic state transition.

Fanny Houlbrèque,  Christine Ferrier Pages (2009)
The dual character of corals, that they are both auto- and heterotrophs, was recognized early in the twentieth Century. It is generally accepted that the symbiotic association between corals and their endosymbiotic algae (called zooxanthellae) is fundamental to the development of coral reefs in oligotrophic tropical oceans because zooxanthellae transfer the major part of their photosynthates to the coral host (autotrophic nutrition). However, numerous studies have confirmed that many species of corals are also active heterotrophs, ingesting organisms ranging from bacteria to mesozooplankton. Heterotrophy accounts for between 0 and 66% of the fixed carbon incorporated into coral skeletons and can meet from 15 to 35% of daily metabolic requirements in healthy corals and up to 100% in bleached corals. Apart from this carbon input, feeding is likely to be important to most scleractinian corals, since nitrogen, phosphorus, and other nutrients that cannot be supplied from photosynthesis by the coral's symbiotic algae must come from zooplankton capture, particulate matter or dissolved compounds. A recent study showed that during bleaching events some coral species, by increasing their feeding rates, are able to maintain and restore energy reserves. This review assesses the importance and effects of heterotrophy in tropical scleractinian corals. We first provide background information on the different food sources (from dissolved organic matter to meso- and macrozooplankton). We then consider the nutritional inputs of feeding. Finally, we review feeding effects on the different physiological parameters of corals (tissue composition, photosynthesis and skeletal growth).

Yoshinori Tamada,  Hideo Bannai,  Osamu Maruyama … (2002)
The prediction of localization sites of various proteins is an important and challenging problem in the field of molecular biology. TargetP, by Emanuelsson et al. (J. Mol. Biol., 300, 1005-1016, 2000) is a neural network based system which is currently the best predictor in the literature for N-terminal sorting signals. One drawback of neural networks, however, is that it is generally difficult to understand and interpret how and why they make such predictions. In this paper, we aim to generate simple and interpretable rules as predictors, and still achieve a practical prediction accuracy. We adopt an approach which consists of an extensive search for simple rules and various attributes which is partially guided by human intuition. We have succeeded in finding rules whose prediction accuracies come close to that of TargetP, while still retaining a very simple and interpretable form. We also discuss and interpret the discovered rules.

The genome of Aiptasia, a sea anemone model for coral symbiosis.

Sebastian Baumgarten,  Oleg Simakov,  Lisl Esherick … (2015)
The most diverse marine ecosystems, coral reefs, depend upon a functional symbiosis between a cnidarian animal host (the coral) and intracellular photosynthetic dinoflagellate algae. The molecular and cellular mechanisms underlying this endosymbiosis are not well understood, in part because of the difficulties of experimental work with corals. The small sea anemone Aiptasia provides a tractable laboratory model for investigating these mechanisms. Here we report on the assembly and analysis of the Aiptasia genome, which will provide a foundation for future studies and has revealed several features that may be key to understanding the evolution and function of the endosymbiosis. These features include genomic rearrangements and taxonomically restricted genes that may be functionally related to the symbiosis, aspects of host dependence on alga-derived nutrients, a novel and expanded cnidarian-specific family of putative pattern-recognition receptors that might be involved in the animal-algal interactions, and extensive lineage-specific horizontal gene transfer. Extensive integration of genes of prokaryotic origin, including genes for antimicrobial peptides, presumably reflects an intimate association of the animal-algal pair also with its prokaryotic microbiome.