The stunting syndrome in developing countries 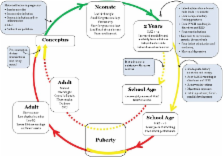 Linear growth failure is the most common form of undernutrition globally. With an estimated 165 million children below 5 years of age affected, stunting has been identified as a major public health priority, and there are ambitious targets to reduce the prevalence of stunting by 40% between 2010 and 2025. We view this condition as a ‘stunting syndrome’ in which multiple pathological changes marked by linear growth retardation in early life are associated with increased morbidity and mortality, reduced physical, neurodevelopmental and economic capacity and an elevated risk of metabolic disease into adulthood. Stunting is a cyclical process because women who were themselves stunted in childhood tend to have stunted offspring, creating an intergenerational cycle of poverty and reduced human capital that is difficult to break. In this review, the mechanisms underlying linear growth failure at different ages are described, the short-, medium- and long-term consequences of stunting are discussed, and the evidence for windows of opportunity during the life cycle to target interventions at the stunting syndrome are evaluated.

Tanya Yatsunenko,  Federico E Rey,  Mark Manary … (2012)
Gut microbial communities represent one source of human genetic and metabolic diversity. To examine how gut microbiomes differ between human populations when viewed from the perspective of component microbial lineages, encoded metabolic functions, stage of postnatal development, and environmental exposures, we characterized bacterial species present in fecal samples obtained from 531 individuals representing healthy Amerindians from the Amazonas of Venezuela, residents of rural Malawian communities, and inhabitants of USA metropolitan areas, as well as the gene content of 110 of their microbiomes. This cohort encompassed infants, children, teenagers and adults, parents and offspring, and included mono- and dizygotic twins. Shared features of the functional maturation of the gut microbiome were identified during the first three years of life in all three populations, including age-associated changes in the representation of genes involved in vitamin biosynthesis and metabolism. Pronounced differences in bacterial species assemblages and functional gene repertoires were noted between individuals residing in the USA compared to the other two countries. These distinctive features are evident in early infancy as well as adulthood. In addition, the similarity of fecal microbiomes among family members extends across cultures. These findings underscore the need to consider the microbiome when evaluating human development, nutritional needs, physiological variations, and the impact of Westernization.

Maternal and child undernutrition and overweight in low-income and middle-income countries.

Ricardo D. Uauy,  Mercedes de Onis,  Zulfiqar Bhutta … (2013)
Maternal and child malnutrition in low-income and middle-income countries encompasses both undernutrition and a growing problem with overweight and obesity. Low body-mass index, indicative of maternal undernutrition, has declined somewhat in the past two decades but continues to be prevalent in Asia and Africa. Prevalence of maternal overweight has had a steady increase since 1980 and exceeds that of underweight in all regions. Prevalence of stunting of linear growth of children younger than 5 years has decreased during the past two decades, but is higher in south Asia and sub-Saharan Africa than elsewhere and globally affected at least 165 million children in 2011; wasting affected at least 52 million children. Deficiencies of vitamin A and zinc result in deaths; deficiencies of iodine and iron, together with stunting, can contribute to children not reaching their developmental potential. Maternal undernutrition contributes to fetal growth restriction, which increases the risk of neonatal deaths and, for survivors, of stunting by 2 years of age. Suboptimum breastfeeding results in an increased risk for mortality in the first 2 years of life. We estimate that undernutrition in the aggregate--including fetal growth restriction, stunting, wasting, and deficiencies of vitamin A and zinc along with suboptimum breastfeeding--is a cause of 3·1 million child deaths annually or 45% of all child deaths in 2011. Maternal overweight and obesity result in increased maternal morbidity and infant mortality. Childhood overweight is becoming an increasingly important contributor to adult obesity, diabetes, and non-communicable diseases. The high present and future disease burden caused by malnutrition in women of reproductive age, pregnancy, and children in the first 2 years of life should lead to interventions focused on these groups. Copyright © 2013 Elsevier Ltd. All rights reserved.

MORE OpenChoice articles are open access and distributed under the terms of the Creative Commons Attribution Non-Commercial License 3.0