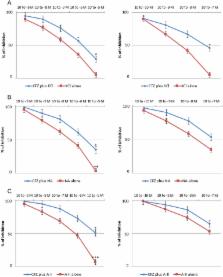 Carfilzomib (CFZ) is a new proteasome inhibitor used for the treatment of multiple myeloma. Besides heart failure, angina and myocardial ischemia occurred following administration of CFZ, which is not contraindicated in patients with recent myocardial infarction/unstable angina excluded from the safety trials.

CFZ administered by bolus injection to the isolated heart increased coronary perfusion pressure (CPP) at all tested concentrations and mildly raised left ventricular pressure and heart rate, only at the highest concentration. Addition of CFZ directly into the organ bath increased the basal tone of isolated aortic strips with contraction plateau reached after 10 min. This spasmogenic effect doubled following ablation of the endothelium. Pretreatment with CFZ amplified the vasospastic action exerted by KCl, noradrenaline (NA) and angiotensin II (A) on aortic strips, and impaired vasodilation following administration of nitroglycerin (NTG) and nifedipine (NFP) on the contraction plateau induced by KCl, NA and A. Aortic strips pretreated with CFZ exhibited impaired relaxation, as compared to untreated strips, following administration of acetylcholine (Ach), an endothelium-dependent vasodilating agent, on the plateau of NA contraction (p < 0.05).

CFZ increased CPP, resting vasoconstricting tone and the spasmogenic effect of different agents. Preincubation with CFZ decreased the anti-spasmogenic activity of NTG and NFP, as well as reduced by over 50% the vasodilating effect of Ach, suggesting that CFZ can impair vasodilation via an endothelium dependent mechanism. Further studies are warranted to establish its clinical safety in patients with known CAD and prior history of coronary spasm.

Carfilzomib is a new chemotherapeutic agent used for the treatment of multiple myeloma. Our study shows that carfilzomib increases coronary perfusion pressure, resting vasoconstricting tone, and the spasmogenic effect of noradrenaline and angiotensin II, while it curbs the vasodilatory action of nitroglycerine and nifedipine. Our findings are relevant to human health as they warrant caution in the use of carfilzomib in elderly patients with cardiovascular risk factors and, even more importantly, in those with preexisting heart conditions, who are also eligible to receive carfilzomib, even though they were excluded from the safety trials, based on which carfilzomib use was approved.

The obligatory role of endothelial cells in the relaxation of arterial smooth muscle by acetylcholine.

Robert F. Furchgott,  John Zawadzki (1980)
Despite its very potent vasodilating action in vivo, acetylcholine (ACh) does not always produce relaxation of isolated preparations of blood vessels in vitro. For example, in the helical strip of the rabbit descending thoracic aorta, the only reported response to ACh has been graded contractions, occurring at concentrations above 0.1 muM and mediated by muscarinic receptors. Recently, we observed that in a ring preparation from the rabbit thoracic aorta, ACh produced marked relaxation at concentrations lower than those required to produce contraction (confirming an earlier report by Jelliffe). In investigating this apparent discrepancy, we discovered that the loss of relaxation of ACh in the case of the strip was the result of unintentional rubbing of its intimal surface against foreign surfaces during its preparation. If care was taken to avoid rubbing of the intimal surface during preparation, the tissue, whether ring, transverse strip or helical strip, always exhibited relaxation to ACh, and the possibility was considered that rubbing of the intimal surface had removed endothelial cells. We demonstrate here that relaxation of isolated preparations of rabbit thoracic aorta and other blood vessels by ACh requires the presence of endothelial cells, and that ACh, acting on muscarinic receptors of these cells, stimulates release of a substance(s) that causes relaxation of the vascular smooth muscle. We propose that this may be one of the principal mechanisms for ACh-induced vasodilation in vivo. Preliminary reports on some aspects of the work have been reported elsewhere.

A cryptic protease couples deubiquitination and degradation by the proteasome.

Michael F. Cohen,  Paula Cohen,  Tingting Yao (2002)
The 26S proteasome is responsible for most intracellular proteolysis in eukaryotes. Efficient substrate recognition relies on conjugation of substrates with multiple ubiquitin molecules and recognition of the polyubiquitin moiety by the 19S regulatory complex--a multisubunit assembly that is bound to either end of the cylindrical 20S proteasome core. Only unfolded proteins can pass through narrow axial channels into the central proteolytic chamber of the 20S core, so the attached polyubiquitin chain must be released to allow full translocation of the substrate polypeptide. Whereas unfolding is rate-limiting for the degradation of some substrates and appears to involve chaperone-like activities associated with the proteasome, the importance and mechanism of degradation-associated deubiquitination has remained unclear. Here we report that the POH1 (also known as Rpn11 in yeast) subunit of the 19S complex is responsible for substrate deubiquitination during proteasomal degradation. The inability to remove ubiquitin can be rate-limiting for degradation in vitro and is lethal to yeast. Unlike all other known deubiquitinating enzymes (DUBs) that are cysteine proteases, POH1 appears to be a Zn(2+)-dependent protease.

The last two authors share the senior position of the manuscript.