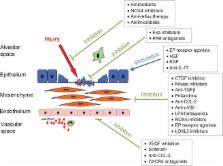 Over the past decade, there has been a cohesive effort from patients, physicians, clinical and basic scientists, and the pharmaceutical industry to find definitive treatments for idiopathic pulmonary fibrosis (IPF). As understanding of disease behavior and pathogenesis has improved, the aims of those treating IPF have shifted from reversing the disease to slowing or preventing progression of this chronic fibrotic illness. It is to be hoped that by slowing disease progression, survival will be improved from the current dismal median of 3.5 years following diagnosis. In Europe and Asia, a milestone has recently been reached with the licensing of the first IPF-specific drug, pirfenidone. This review assesses the current treatment modalities available for IPF, including pirfenidone. It also turns an eye to the future and discusses the growing number of promising compounds currently in development that it is hoped, in time, will make their way into the clinic as treatments for IPF.

Arthur Lau,  Ralph Weinstein,  D Bartel … (2001)
Two small temporal RNAs (stRNAs), lin-4 and let-7, control developmental timing in Caenorhabditis elegans. We find that these two regulatory RNAs are members of a large class of 21- to 24-nucleotide noncoding RNAs, called microRNAs (miRNAs). We report on 55 previously unknown miRNAs in C. elegans. The miRNAs have diverse expression patterns during development: a let-7 paralog is temporally coexpressed with let-7; miRNAs encoded in a single genomic cluster are coexpressed during embryogenesis; and still other miRNAs are expressed constitutively throughout development. Potential orthologs of several of these miRNA genes were identified in Drosophila and human genomes. The abundance of these tiny RNAs, their expression patterns, and their evolutionary conservation imply that, as a class, miRNAs have broad regulatory functions in animals.

Justin Annes,  Susan B. Rifkin,  David S. Munger (2003)
TGFbeta is secreted as part of a latent complex that is targeted to the extracellular matrix. A variety of molecules, 'TGFbeta activators,' release TGFbeta from its latent state. The unusual temporal discontinuity of TGFbeta synthesis and action and the panoply of TGFbeta effects contribute to the interest in TGF-beta. However, the logical connections between TGFbeta synthesis, storage and action are obscure. We consider the latent TGFbeta complex as an extracellular sensor in which the TGFbeta propeptide functions as the detector, latent-TGFbeta-binding protein (LTBP) functions as the localizer, and TGF-beta functions as the effector. Such a view provides a logical continuity for various aspects of TGFbeta biology and allows us to appreciate TGFbeta biology from a new perspective.

Gregory P. Geba,  Jane Q. Chen,  J. Wang … (1999)
Interleukin (IL)-13 is a pleiotropic cytokine produced in large quantities by activated CD4(+) Th2 lymphocytes. To define further its potential in vivo effector functions, the Clara cell 10-kDa protein promoter was used to express IL-13 selectively in the lung, and the phenotype of the resulting transgenic mice was characterized. In contrast to transgene-negative littermates, the lungs of transgene-positive mice contained an inflammatory response around small and large airways and in the surrounding parenchyma. It was mononuclear in nature and contained significant numbers of eosinophils and enlarged and occasionally multinucleated macrophages. Airway epithelial cell hypertrophy, mucus cell metaplasia, the hyperproduction of neutral and acidic mucus, the deposition of Charcot-Leyden-like crystals, and subepithelial airway fibrosis were also prominently noted. Eotaxin protein and mRNA were also present in large quantities in the lungs of the transgene-positive, but not the transgene-negative, mice. IL-4, IL-5, granulocyte-macrophage colony-stimulating factor, and monocyte chemoattractant protein-5 were not similarly detected. Physiological evaluations revealed significant increases in baseline airways resistance and airways hyperresponsiveness (AHR) to methacholine in transgene-positive animals. Thus, the targeted pulmonary expression of IL-13 causes a mononuclear and eosinophilic inflammatory response, mucus cell metaplasia, the deposition of Charcot-Leyden-like crystals, airway fibrosis, eotaxin production, airways obstruction, and nonspecific AHR. IL-13 may play an important role in the pathogenesis of similar responses in asthma or other Th2-polarized tissue responses.