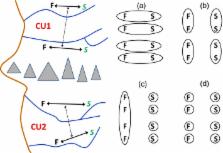 It is now routinely possible to generate genomics‐scale datasets for nonmodel species; however, many questions remain about how best to use these data for conservation and management. Some recent genomics studies of anadromous Pacific salmonids have reported a strong association between alleles at one or a very few genes and a key life history trait (adult migration timing) that has played an important role in defining conservation units. Publication of these results has already spurred a legal challenge to the existing framework for managing these species, which was developed under the paradigm that most phenotypic traits are controlled by many genes of small effect, and that parallel evolution of life history traits is common. But what if a key life history trait can only be expressed if a specific allele is present? Does the current framework need to be modified to account for the new genomics results, as some now propose? Although this real‐world example focuses on Pacific salmonids, the issues regarding how genomics can inform us about the genetic basis of phenotypic traits, and what that means for applied conservation, are much more general. In this perspective, we consider these issues and outline a general process that can be used to help generate the types of additional information that would be needed to make informed decisions about the adequacy of existing conservation and management frameworks.

Andrew Wood,  Tõnu Esko,  Jian Yang … (2014)
Using genome-wide data from 253,288 individuals, we identified 697 variants at genome-wide significance that together explain one-fifth of heritability for adult height. By testing different numbers of variants in independent studies, we show that the most strongly associated ~2,000, ~3,700 and ~9,500 SNPs explained ~21%, ~24% and ~29% of phenotypic variance. Furthermore, all common variants together captured the majority (60%) of heritability. The 697 variants clustered in 423 loci enriched for genes, pathways, and tissue-types known to be involved in growth and together implicated genes and pathways not highlighted in earlier efforts, such as signaling by fibroblast growth factors, WNT/beta-catenin, and chondroitin sulfate-related genes. We identified several genes and pathways not previously connected with human skeletal growth, including mTOR, osteoglycin and binding of hyaluronic acid. Our results indicate a genetic architecture for human height that is characterized by a very large but finite number (thousands) of causal variants.

Keith A. Crandall,  Olaf R.P. Bininda-Emonds,  Georgina Mace … (2000)
Conservation biologists assign population distinctiveness by classifying populations as evolutionarily significant units (ESUs). Historically, this classification has included ecological and genetic data. However, recent ESU concepts, coupled with increasing availability of data on neutral genetic variation, have led to criteria based exclusively on molecular phylogenies. We argue that the earlier definitions of ESUs, which incorporated ecological data and genetic variation of adaptive significance, are more relevant for conservation. Furthermore, this dichotomous summary (ESU or not) of a continuum of population differentiation is not adequate for determining appropriate management actions. We argue for a broader categorization of population distinctiveness based on concepts of ecological and genetic exchangeability (sensu Templeton).